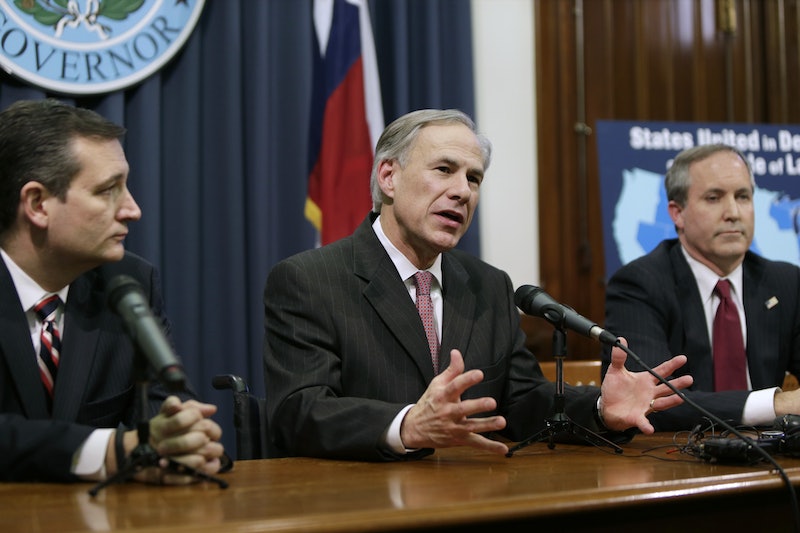 The stage is set for another showdown in Texas over a controversial bill aimed at preventing transgender students from using restrooms according to their gender identity. On Tuesday, Gov. Greg Abbott called for a 30-day special session, partly to revive the fight over Texas' bathroom bill that critics say would sanction discrimination against transgender students.

The bill, put forth by Republican legislators with a great deal of support from Lt. Gov. Dan Patrick, would require individuals to use school bathrooms that accord with the gender identity assigned to them at birth. "At a minimum, we need a law that protects the privacy of our children in our public schools," Abbott told reporters at the Capitol in Austin, according to The New York Times.

The governor also called state lawmakers back to Austin to consider so-called "sunset bills," or legislation that must be passed in order to keep some state agencies afloat in terms of funding. Abbott, in an attempt to make those funding bills a priority, stated that agency-related legislation will be considered prior to the bathroom bill.

Critics say the Texas bathroom bill is harmful to transgender men, women, and children. “Gov. Abbott has called a special session partly dedicated to discriminating against transgender Texans,” said JoDee Winterhof, senior vice president of policy and political affairs for the Human Rights Campaign, in a statement. "In doing so, he has caved to the demands of the fringe politicians who are using LGBTQ people as pawns to win cheap political points."

Chuck Smith, who heads the LGBTQ advocacy group Equality Texas, expressed a similar sentiment, telling The New York Times that if passed during the special session, the Texas bathroom bill would amount to discrimination. "This is a 100 percent political issue, and the only reason for it is to target, demonize and stigmatize transgender people," Smith said.

The Texas legislation is not unlike the 2016 North Carolina bathroom law that sparked widespread backlash and a boycott that could cost up to $3.6 billion in lost business. Texas' bill, however, is more specific. It limits the bathroom restrictions to municipal and school building restrooms.

Nonetheless, LGBTQ rights advocates opposing the bill say they have been heartened by the support their cause has received. “I never thought I’d see that many people show up in Texas on a topic specifically related to trans people,” Lou Weaver, transgender programs coordinator for Equality Texas, told the Texas Tribune. “It continued to happen over and over again… These people are continuing to show up.”