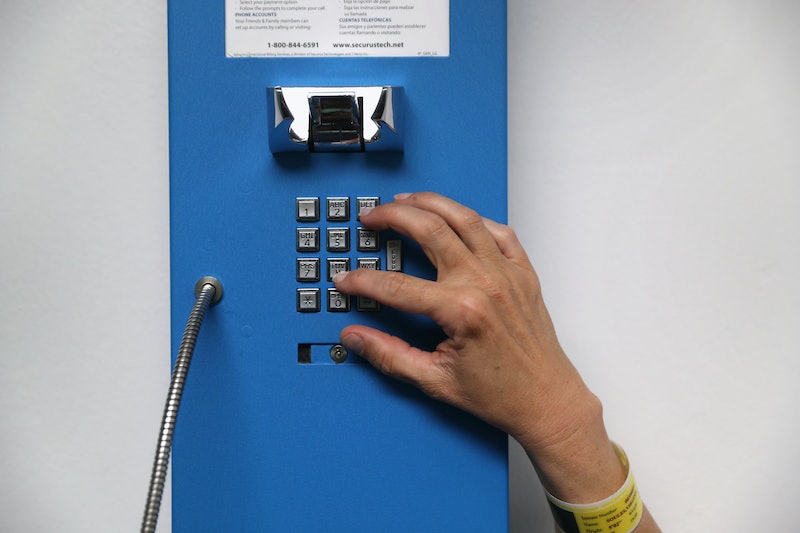 It will finally be a bit cheaper for Texas prison system inmates to call home. On Friday, Texas dropped the price of prison phone calls by more than 75 percent, according to the Houston Chronicle. Phone calls will now cost an inmate 6 cents per minute regardless of call distance. Before, an inmate paid about 26 cents per minute for each phone call.

The new rules will take effect on Sept. 1, according to the Chronicle. A 15-minute phone call will cost 90 cents compared to the current average of $3.90.

In June 2017, the United States Court of Appeals for the District of Columbia Circuit ruled against the Federal Communications Commission move to cap the rising costs of prison phone calls. The decision was 2-1. (The agency had plans to argue for its rules in court until President Donald Trump's appointment to head the FCC stopped the legal defense preparation, according to The New York Times.)

The decision was reached days into the nationwide prison strike, but as Houston Chronicle reporter Keri Blakinger wrote on Twitter, the timing is more likely to be coincidence than direct correlation. "I'm seeing a lot of comments that this change resulted from the national strike but timing makes this unlikely since the request for proposal went out in April," Blakinger tweeted on Saturday morning.

Officials from the Texas Department of Criminal Justice said the new policy is important for imprisoned people's relationships with their family and friends outside of prison.

"The new [Offender Telephone System] contract is going to benefit not only families of offenders who are hoping to stay connected, but enhance the agency's focus on re-entry," Texas Department of Criminal Justice Executive Director Bryan Collier told the Texas Tribune. "The system is used to maintain relationships with friends and family that are a vital part of a successful re-entry and reintegration of offenders into the community."

Jennifer Erschabek, Texas Inmate Families Association executive director, told the Texas Tribune that the policy change was a pleasant surprise. "This is great news for families who are stressed by incarceration both financially and emotionally," Erschabek told the news outlet. "Being able to connect with a phone call is so valuable to wives, parents, children and others."

Though the proposal to lower phone call prices in Texas prisons started in April, the announcement's timing couldn't have made it more relevant: There's a nationwide prison strike occurring in at least 17 states. News of the strike has been shared across social media, and even made it onto the timeline of rapper J. Cole.

While cheaper phone calls from the inside aren't an explicit demand of the prison strike, it does fit in with the 10-point demand list the strikers circulated to media. The strike's first demand is: "Immediate improvements to the conditions of prisons and prison policies that recognize the humanity of imprisoned men and women."

Those striking are also demanding increased spending on rehabilitation services in state prisons and the ending of "racist gang enhancement laws," among others. Though criminal justice reform bills are being put on hold at the federal level, the news from Texas is a small victory for activists — and could signal more to come.

More like this
Rishi Sunak's Wife Is Worth More Than The Queen
By El Hunt
It’s Official: The UK Is Hosting Eurovision 2023
By Sam Ramsden and Rachel Mantock
The Government Announces Plans To Tackle Gender Health Inequality In England
By Sam Ramsden
The Lionesses Are Calling For Equal Access To Football In Schools
By Sophie McEvoy
Get Even More From Bustle — Sign Up For The Newsletter