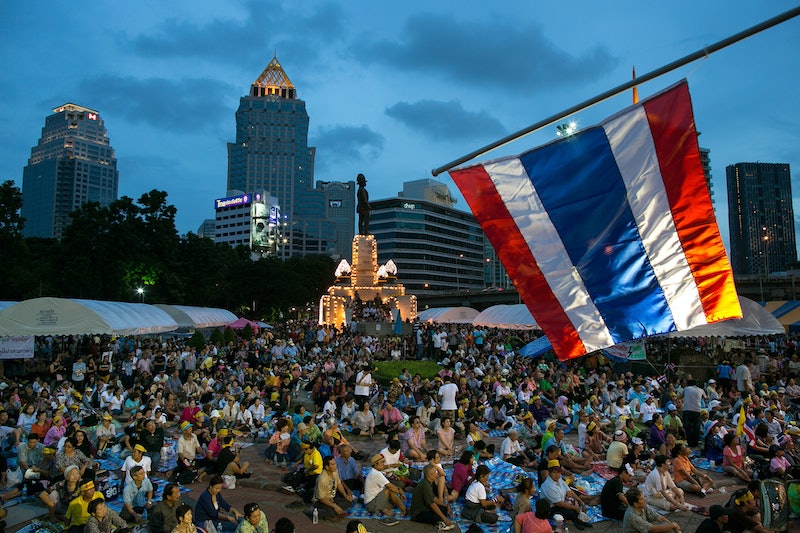 History was made during Thailand's general election in March, after the country's first-ever transgender Member of Parliament (MP) was elected to office. The newly-minted politician is already outlining their vision for their tenure in office, as Tanwarin Sukkhapisit, Thailand's first transgender MP hopes to change the way that LGBTQ people are treated in the Southeast Asian country.

Tanwarin, who identifies as non-binary, was elected as an MP on March 24, The Guardian reported. Prior to their run for office, Tanwarin was well-known in the country for their filmmaking work about LGBTQ experiences in Thailand. In discussing their vision for Thailand's political future with the paper, Tanwarin emphasized that they want to help build policies that eliminate discrimination against LGBTQ individuals. As Tanwarin described to The Guardian:

I want to write a new political history for Thailand ... I spent years making films talking about the experience of transgender and LGBT people in Thailand but it no longer felt like enough to tell the story. I wanted to change the discriminatory laws. Thai society is patriarchal and unequal and does not value all humans the same. For my whole life, I have been treated as a second-class citizen and it should not be this way.

Tanwarin ran for office as a member of the Future Forward Party. As Voice of America (VOA) reported, the party was co-created about a year ago by Thai entrepreneur Thanathorn Juangroongruangkit and Thai academic Piyabutr Saengkanokkul. ABC News noted that Future Forward is a party geared toward Thai youth and is strongly opposed to military rule in the country.

Tanwarin told the Bangkok Post that they believe their party is making history because of its inclusivity and its anti-discrimination goals. "We are rookies in politics, but we have experience and achievements in our careers and hope to put them to use," Tanwarin said to the Bangkok Post. "We will speak for ordinary people to create an equal society."

As The Guardian described, Thailand has a complex relationship with its transgender community. While the paper noted that transgender individuals are perhaps a more visible part of the Thai social fabric than in other countries, they still endure extensive discrimination. For example, as The Guardian noted, in Thailand transgender people are only allowed to have specific jobs and aren't permitted to change their gender identity on their national identity cards. Transgender individuals also aren't allowed to adopt children or get married, the paper revealed.

Tanwarin specifically mentioned some of these discriminatory laws when discussing the changes they hope to make as an MP with Voice of America. “I want to be a person who represents the minority people in Thailand because for me — LGBT people — we have not the right to marry in a same-sex marriage," Tanwarin told the outlet. "Legally, by law, we cannot adopt children."

Once Thailand's new parliament convenes, it's clear that Tanwarin will be working judiciously to ensure that LGBTQ individuals' rights are represented and protected.