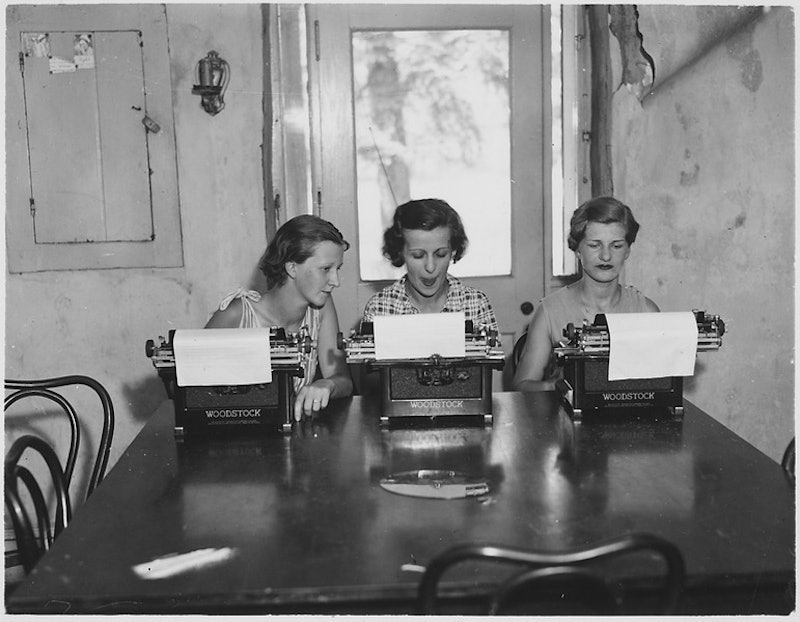 Novelist and University of Virginia English professor Bruce Holsinger started a Twitter hashtag to give a shout-out to the women who wrote their husbands' books, and giving it a scroll-through fascinates and angers. The #ThanksForTyping hashtag exposes the long, carpal tunnel-inducing hours that academics' wives put in at their keyboards to bring their husbands' ideas to market. In many cases, the wives were not even named by their spouses, even when they typed and re-typed manuscripts several times during the editing process.

Holsinger's work brings to mind a quote from Virginia Woolf's A Room of One's Own: "I would venture to guess that Anon, who wrote so many poems without signing them, was often a woman." Throughout history, women's work has been uncredited, ignored, or outright stolen by their male counterparts. Nannerl Mozart, Wolfgang Amadeus' older sister, was just as talented as her brother, but was forced to abandon her musical studies as she entered adulthood. The Swedish Academy granted a Nobel Prize for the discovery of DNA to Jim Watson, Francis Crick, and Maurice Wilkins, though their work relied heavily on research conducted by Rosalind Franklin. For his novels, The Great Gatsby author F. Scott Fitzgerald stole full passages from the writings of his wife, Zelda, whom he later had committed to a mental hospital.

These are not incidental cases. For decades, women worked behind the scenes in Hollywood, editing hours of cutting-room drivel into money-making blockbusters. Lynn Povich's 2013 book, The Good Girls Revolt — the basis for the unfairly cancelled Amazon series — revealed how women researchers sued Newsweek for refusing to give them bylines, even when male reporters plagiarized their work in print. And who can forget the "hidden figures" that finally made headlines in 2016: black women who worked as human computers at NACA during the mid-20th century and put Neil Armstrong on the moon. Women have always worked behind the scenes, doing unpaid labor for paltry thanks, if any at all.

Before the 1980s and 1990s, typing was largely a secretarial — read: women's — skill, which would mean that the male authors of these books could not have typed their manuscripts themselves. However, some of the #ThanksForTyping women weren't taught typists, either.

More alarming still, Holsinger tells BuzzFeed News that "a shocking proportion" of #ThanksForTyping books were published quite recently. "Ridiculous numbers of men, it seems, still didn't know how to type throughout the 1990s and early 2000s," he says, "or at least performed a kind of deliberate secretarial incompetence when it came to the basic mechanics of writing and transcription."

Ladies, don't write your anyone else's books. Write your own.