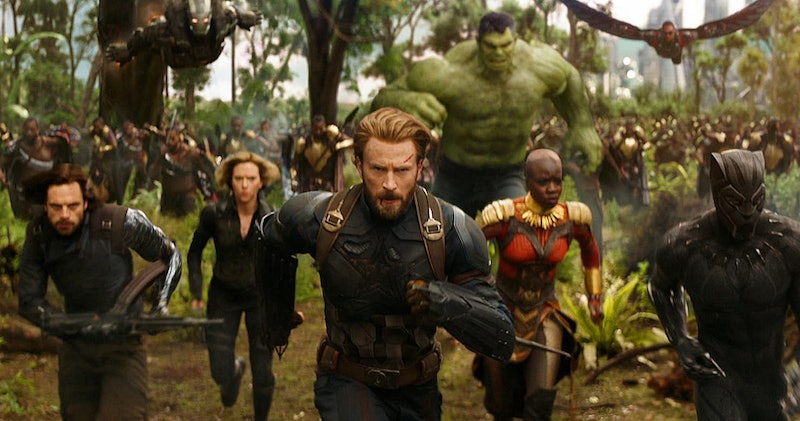 Spoilers ahead! With Avengers: Infinity War cramming an unprecedented number of superheroes on the screen, it's easy to overlook the glut of supervillains they're fighting. Thanos didn't come to play getting those Infinity Stones; he brought his biggest, baddest fighters the Black Guard along for the battle, including formidable foe Proxima Midnight. And the actor who plays Thanos' female villain in Infinity War seems an eerily appropriate choice for the film's shocking conclusion.

The Leftovers star Carrie Coon picks up the quantum spear to play the Black Guard's only female member. The mystery of who would play the four main members of the Black Guard was one of the last reveals of Infinity War's casting. but in April 2018 co-director Joe Russo officially revealed to Radio Times that the Emmy-nominated actor would join the cast as the voice of the character. She shares the role with stunt performer Monique Ganderton who played Proxima on-set, and who's worked as stunt coordinator and performer in a number of other Marvel movies, including Thor: Ragnarok and Captain America: Civil War.

The character still involves a great deal of CGI, as Coon herself acknowledged via tweet following the official announcement, thanking the "dazzle of gifted animators":

A nearly invulnerable expert combatant with superhuman strength and agility, Proxima Midnight would be frightening enough on her own without her weapon, a spear forged by Thanos from a sun warped in space-time. It works as star, supernova, and black hole as needed, pinning even The Hulk down and sapping enemies of strength. It never misses its mark as it hunts down its target with deadly precision after throwing, and in what seems like severe overkill is also tipped with a deadly poison. The weapon's so closely associated with the character (and also just cool-looking) that it was included in the trailer.

And that's just Proxima. In a change from the comics, where the Black Guard are a motley assortment of aliens working under Thanos' leadership, Infinity War specifically names them Children of Thanos, implying a stronger filial relationship. Proxima is normally married to fellow Black Guard Corvus Glaive (played by Limitless and Constantine actor Michael James Shaw), but it's not made clear what their relationship in the movie is.

Coon's Infinity War role reunites the actor with her The Legend Of The Whitetail Deer Hunter co-star Josh Brolin, who plays the biggest bad guy of them all, Thanos. He's the reason the Avengers have, well, assembled, and who the Black Guard are working with to collect the Infinity Stones from all across the Universe. Proxima is a far cry from Coon's most beloved role as Nora Durst in The Leftovers, given that one's trying to make sense of the bizarre loss of her entire family, and the other is an expert murder machine. But the two do have "disappearing humans" in common, though for Durst it's a problem, and for Proxima it's a goal.

Thanos' ultimate reason for collecting the Infinity Stones is to gain the power to destroy half the life in the Universe. While that's a lot heftier than The Leftover's measly 2 percent disappearance rate, the effect in both worlds is the same: devastating. While Durst ultimately lives to see some sort of resolution, Proxima isn't so lucky. Shame.

Besides playing a supervillain, Coon's had an extremely busy 2018. The actor appeared in the Oscar-nominated news thriller The Post, has completed work on sci-fi thriller The Kin, and is wrapping up Steve McQueen drama The Kin, in which she stars with Viola Davis. She's also had some wonderful personal news to announce; in January 2016 she and husband Tracy Letts confirmed they were having a baby. Though it's unlikely Coon will make any more appearances in the Marvel Universe, she's having a pretty great time in the real world, it seems.