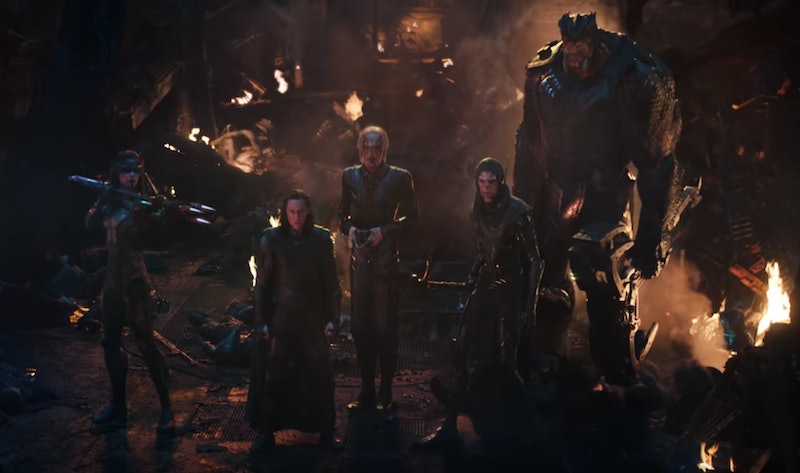 Marvel's Avengers: Infinity War has been touted as the greatest crossover movie event in history, but did you know that crossover didn't just include comic book characters? Squidward, a resident of SpongeBob SquarePants' Bikini Bottom, shows up in Infinity War, or, well, at least his name does. To be fair, the actor who plays Squidward in Avengers: Infinity War would probably want us to call him by his character name: Ebony Maw.

We all know that Thanos is the main villain in Avengers: Infinity War, but just like the team of superheroes tasked with defeating him, he didn't come to fight alone. He brought the Black Order with him, and one of the prominent members is Corvus, played via motion capture by Michael James Shaw (Limitless, Roots). Another? Ebony Maw, played by Tom Vaughan-Lawlor. This character has an entirely other-wordly look, which prompts Tony Stark to nickname him "Squidward." So, no, the real Squidward does not appear in Infinity War, but fans should note Squidward/Ebony Maw is much, much worse.

As a member of the Black Order, Corvus is one of Thanos' generals, and, as one of Thanos' adopted children, he is a huge threat to the Avengers, most notably to Gamora, his sister. And, like Thanos and Gamora, Ebony Maw is an alien, which means he has pretty impressive super-human powers including persuasion, teleportation, and superior fighting skills.

Looking at Ebony Maw's facial features, you can see why Tony would nickname him Squidward. What you can't see is the actor actually doing the performance, or those doing the performances of Thanos' other henchmen. Take Shaw, for instance, aka Corvus; the actor only confirmed it was him playing the role on Sunday, April 22, just five days before Infinity War's release. Since then Shaw has actually confirmed a lot about his mysterious character, including the animal that inspired him. "He kind of looks like a praying mantis, so I pulled from there and created this kind of I guess you could say insect-like persona," Shaw said in an interview with International Business Times.

In that same interview, Shaw confirmed what fans have long suspected. In Infinity War Corvus is married to Proxima Midnight, as played by Carrie Coon. "Corvus is also married to Proxima, one of the other generals. They're kind of like the Hollywood couple of the Marvel supervillain universe, I guess," Shaw said. "It's kind of a dark marriage, but they have each other's back in battle." And that will definitely come in handy. While Corvus doesn't appear much in the trailers, he does appear in a scene that was released, showing him taking a few hits in battle with Black Widow.

As for Ebony Maw, that villain has a substantial role in Infinity War, battling the Avengers and their allies all throughout the film. The movie is the biggest one yet for actor Vaughan-Lawlor, but as his performance shows, he's clearly up to the task. And interestingly, directors Joe and Anthony Russo, they didn't prioritize casting actors familiar with motion capture to play Thanos' henchmen, instead having talented actors work with motion capture and movement choreographer veteran Terry Notary. Notary plays Cull Obsidian in the film, as well as Teen Groot, and has performed in motion capture before in Kong: Skull Island, War for the Planet of the Apes, and more. "Terry worked very closely with every one of them to help them understand... movement, what the relationship between their body and their characters' bodies are, almost like a puppeteer," Anthony told CinemaBlend.

No word yet on whether or not Ebony Maw will survive to be in Avengers: 4, but if so, then fans can definitely expect Vaughan-Lawlor to put on the mo-cap suit again and bring the MCU's version of Squidward back to life.

CORRECTION: A previous version of this article mistakenly identified Ebony Maw; it has been updated to reflect the change.