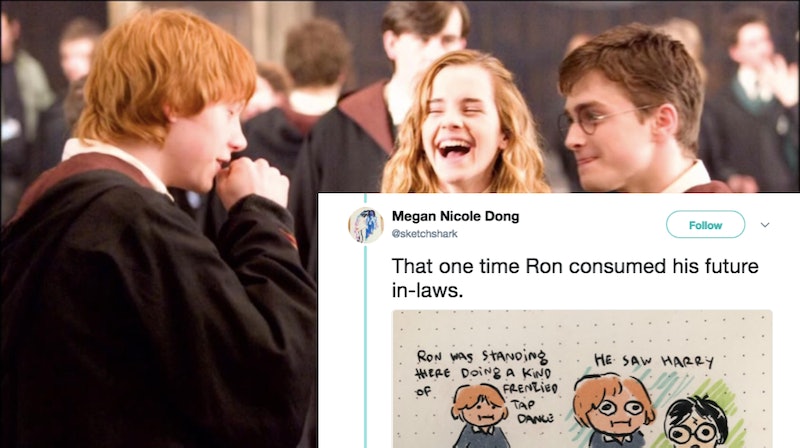 By now, you have probably heard about Botnik Studios' new Harry Potter bot writing project, which used a predictive keyboard to write in the "style" of J.K. Rowling. That Harry Potter chapter written by a bot has now been illustrated by a cartoonist, and the results are truly hilarious.

Botnik Studios fed the text of all seven Harry Potter books into Predictive Writer, its new predictive keyboard, and then wrote a new Harry Potter chapter, "The Handsome One," using sentences that the program constructed. "The Handsome One" comes from a book with the Douglas Adams-esque title Harry Potter and the Portrait of What Looked Like a Large Pile of Ash, and it. is. wild.

If you have ever wanted to read a Harry Potter book in which Hermione and her family are food, Hufflepuff house has a pet pig, a romance starts between two Death Eaters, and Harry blinds himself during a confrontation with the "very bad and mean wizard" Voldemort, then you should really head on over to Botnik and read Predictive Writer's new Harry Potter chapter. It's only about three pages long, and it is 100 percent worth the time it takes to read. You will never look at all those background Death Eaters the same way again, believe me.

Pinky Malinky Supervising Director Megan Nicole Dong, A.K.A. sketchshark, saw her chance and took it. She illustrated the best moments from Harry Potter and the Portrait of What Looked Like a Large Pile of Ash and they're pretty freakin' great. Although Dong is not the only artist to publish her "Handsome One" sketches online — Disney character designer Elsa Chang and Pinky Malinky co-creator Rikke Asbjoern also released some fantastic illustrations — she appears to have posted the most comics based on Botnik's Harry Potter project.

Ron moments are the best moments in Harry Potter and the Portrait of What Looked Like a Large Pile of Ash, and Botnik's Harry Potter chapter wastes no time in getting to some amazing quotes like these:

Ron was standing there and doing a kind of frenzied tap dance. He saw Harry and immediately began to eat Hermione's family.

Ron's Ron shirt was just as bad as Ron himself.

To Harry, Ron was a loud, slow, soft bird. Harry did not like to think about birds.

"Ron's the handsome one," muttered Harry as he reluctantly reached for his [wand].

"Not so handsome now," thought Harry as he dipped Hermione in hot sauce. . . . Harry was hungrier than he had ever been.

Of course, there are some other hilarious moments in Botnik Studios' Harry Potter chapter that don't involve Ron, such as:

They looked at the door, screaming about how closed it was and asking it to be replaced with a small orb. The password was "BEEF WOMEN," Hermione cried.

"I think it's okay if you like me," said one Death Eater.

"Thank you very much," replied the other. The first Death Eater confidently leaned forward to plant a kiss on his cheek.

"Oh! Well done!" said the second as his friend stepped back again. All the other Death Eaters clapped politely.

Harry tore his eyes from his head and threw them into the forest. Voldemort raised his eyebrows at Harry, who could not see anything at the moment.

The tall Death Eater was wearing a shirt that said 'Hermione Has Forgotten How To Dance,' so Hermione dipped his face in mud.

Dumbledore's hair scooted next to Hermione as Dumbledore arrived at school.

The pig of Hufflepuff pulsed like a large bullfrog. Dumbledore smiled at it, and placed his hand on its head: "You are Hagrid now."

Here's to hoping Botnik Studios' Predictive Writer keeps churning out chapters of Harry Potter and the Portrait of What Looked Like a Large Pile of Ash.