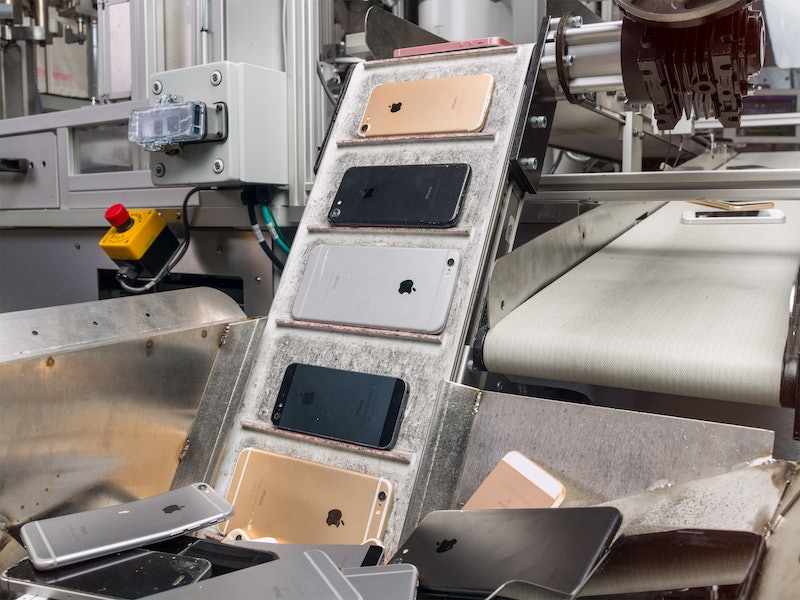 When you tuck your old iPhone into a dark corner of your desk drawer, you're basically throwing money away. Yes, the memes, screenshots, and selfies live on via the omnipresent genius of the Cloud, but your 5.44-inch BFF needn't be squished alongside dried up rollerballs and coffee-stained wedding invites. Apple wants to give your device a second act, and their new trade-in program is designed to make that more secure and accessible than ever before.

“The biggest thing for us on trade-in right now is getting it embedded in the consumer mindset that [if] they want a new product, they can give us the old one, and trust us to strip off all their data and everything else that people worry about," Cook tells Bustle, citing the mindset of car owners as a reference. "When they get a new one, it's just second nature to think through [exchange]," Cook adds. "You would never just leave your car in a drawer or in the garage." Trading in can earn you store credit toward your next upgrade, with even the iPhone 6S, the lowest ranking eligible device, worth “up to $100.”

But the value of trade-in extends beyond your own wallet. If your device is in reasonable condition, once Apple wipes it clean of all those "Taco Bell weekend breakfast hours" searches, they'll repurpose it for a new user, which "extends the life of the product significantly," Cook explains.

That said, if your device is more battered than box fresh, it goes elsewhere — namely, to the world's chicest scrap heap, where it's recycled for parts using Apple's friendly neighborhood robot, Daisy. Launched in 2018 as a successor to Liam, Apple's former in-house robot, Daisy can do battle with an impressive 15 different iPhone models, disassembling 200 devices an hour and retrieving inaccessible core materials along the way. All this leg work is in pursuit of the company's holy grail: a "closed-loop supply chain." First announced in 2017 by Lisa Jackson, Apple’s vice president of environment, policy, and social initiatives, the goal is to manufacture devices exclusively using recycled materials, rather than mined ones.

But what about the energy it takes to perform this environmental wizardry? Is it worth it? "We have to make it so simple to do that it takes no energy," Cook tells Bustle of the process. "I think we've made a lot of inroads in this, but there's more to be done."

Apple is leaning into their efforts to do more. In April, they quadrupled the destinations where users can hand in their device for recycling thanks to a partnership with Best Buy. Since April 2018, their stores, offices, and data centers have run on 100% renewable energy, while the company's leadership has been vocal in their support for the Paris Climate Agreement and Clean Power Plan. Ceres honored Cook for these efforts at their 30th Anniversary Gala on Oct. 22 in New York.

"We weren’t shy about saying that this wasn’t going to be something we could do overnight," Cook said during his keynote speech. "But I have found that something slightly magical happens when you set goals that feel a bit crazy." He continued:

"The effort will take you to places you didn’t anticipate, but the results are almost always better than what you thought was possible at the outset. This one has led us to the discovery of the highest-quality 100% recycled aluminum alloy ever, which now makes up the enclosures of our flagship devices."

If you're reading this story on one such flagship device, it may very well have been built using recycled elements retrieved by one of the company's Daisy robots. With each robot stripping an industrious 1.2 million devices a year, this is a beast you can feel guilt-free about feeding. In fact, both Mother Nature and Tim Cook will thank you.

More like this
Forestcore Is About To Take Over Your TikTok FYP
By Sam Ramsden
Here’s What TikTok's "Mascara” Trend Is *Really* About
By El Hunt
Ashamed Of Your Screen Time Stats? Here's How To Change That
By Alexis Morillo
11 Super Bowl Instagram Captions To Use On Game Day — Even If You Don’t Like Sports
By Alexis Morillo
Get Even More From Bustle — Sign Up For The Newsletter
From hair trends to relationship advice, our daily newsletter has everything you need to sound like a person who’s on TikTok, even if you aren’t.