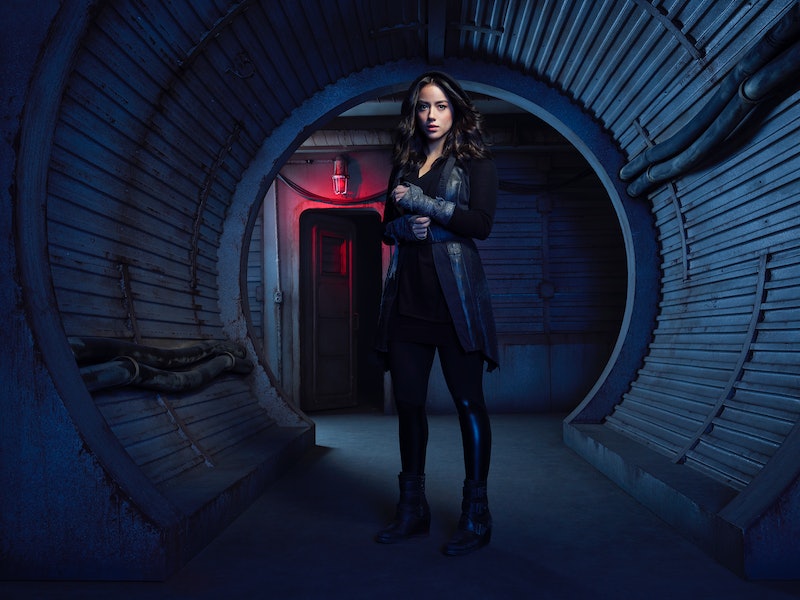 This below contains spoilers from Agents of SHIELD's two-hour Season 5 premiere. So, uh, guys. Whoa. We need to talk about that Agents of SHIELD premiere. After seven long months of waiting to find out exactly what happened to Agent Phil Coulson (Clark Gregg) and co., and the ABC Marvel series definitely did not disappoint, finally doling out some real answers ... while simultaneously leaving us with so many more questions.

After revealing in the Season 4 finale that Coulson and his team were frozen in time and abducted from their diner outing only to wake up in space, fans were left with their jaws on the floor for a super extended hiatus. Why was Coulson in space? Why did he seem so unfazed by the sight of floating astroids outside of his window? Why was he "going to work," and who else from the team was with him? Answers wouldn't come until the two-part Season 5 premiere, "Orientation," and oh boy did they ever.

Not only were Coulson, Daisy (Chloe Bennet), May (Ming-Na Wen), Simmons (Elizabeth Henstridge), Mack (Henry Simmons) and Yo-Yo (Natalia Cordova-Buckley) all stuck in space on a mysterious spaceship where Kree enslaved humans, but they quickly found out, much to their complete horror and confusion, that they were also in the future. The post-apocalyptic future. Outside of the Lighthouse space station floated the crumbled remains of the planet Earth, and as Daisy found out after accidentally falling into another version of the Framework with Lighthouse con artist Deke (Jeff Ward), the destruction of the world was somehow her fault. She supposedly "quaked" the world apart almost 100 years ago. Oops.

As for the missing member of their team, the opening scene of the two-hour premiere revealed that someone (or something) abducted the whole team except for Fitz (Iain De Caestecker), who was "working on it" back in the present, thanks to a super old postcard Coulson found on the space station. Why wasn't he taken with them? What's happening to him back in the present? Since Fitz was nowhere to be seen throughout the entire two hours, that's still up in the air. And while the whole team was figuring out the laws of their new savage home, Simmons found herself enslaved against her will for the leader of the Kree on the spaceship, with some kind of silver device making her deaf to everyone but him. All in all, things are not going great for the SHIELD agents!

"As Coulson is told when he arrives, 'Oh, thank god you're here to save us!'" executive producer Jeff Bell says on set while celebrating filming the 100th episode. "The idea is that SHIELD has to somehow save the future, save the planet — whether that means fixing it there, or liberating its people, or figuring out a way to put things back together, are questions that they will unravel over the course of a whole bunch of episodes."

Introducing this new mystery was a way "to put our team together," according to Bell, "because they've been so fractured over the last season."

"It's a way for us all to come together and solve something together," he says. "Hopefully they'll leave the place a little better than when they found it."

Coulson, usually the leader of the pack, found himself underneath someone's thumb by the end of the premiere, and has no idea what to make of his surroundings or dire situation. That's not something the former Director of SHIELD is used to.

"I did not like that. Neither did Phil," Gregg says with a laugh. "You know, that's something that I think you get quite magnificently in this, they're suddenly thrown into this world that they don't know anything about, that seems kind of savage. So they're suddenly in a world that they don't run and they don't have those kind of powers and have great limitations and they're separated to a certain extent, so finding a way to reestablish themselves as a team is a big, big part of the beginning."

What excited Gregg the most about Season 5 is how deep into the sci-fi genre the show is getting. "I love sci-fi and I feel like we get into a world that has elements of everything from Snowpiercer to Delicatessen and Silent Running and a lot of cool sci-fi like that," he says.

And the fact that no one, from the team to the audience, has any inkling of what's going on is something that SHIELD hasn't done before. "Up until this point, we've told the audience, or the characters know [what's going on]," Marvel TV head Jeph Loeb says. "The Framework is a perfect example: they knew what the Framework was, they agreed to go into the Framework and then they had to deal with the Framework. They're ahead of you. So this is the first time where what we did is everyone starts at the same place. Like they don't know where they are, we don't know where they are."

While the team tries to get their bearings moving forward, Wen reveals that they're going to be confused and feeling out of place for a while.

"We don't have our resources that we normally do, and we don't have backup that we normally have, and the things that make SHIELD, SHIELD," Wen says. "Of course for May, she's supposed to be the one that protects or tries to come and save, and then meanwhile, she's got this massive injury to her leg, and she's not as capable anymore. I think the idea that she really is out of her element is something that makes her feel more vulnerable, and a side to May that we don't usually see, because she can't protect the team the way she would like to."

As for Simmons, the fact that she's been caught off-guard by yet another strange monolith, taking her across space and time, hasn't gone unnoticed.

"For Simmons, it just raises the stakes so much, because when you think about everybody that's not with us, what does that mean? Fitz isn't with us," Henstridge says. "It's a totally different [situation]. She's thinking 'I've done this before! How did I end up here again?' Like, that's just clumsy. But I also think she feels a little bit more prepared than maybe other people, because she has been here before and she got back, and so I think she's hoping that what brought them here can also bring them back."

While Wen jokes that Simmons is a "beacon of hope" for the rest of the team, Henstridge frowns. "She's not that hopeful beyond the first two episodes," she says. "She's kind of a bit more annoyed by [being a slave]. Filming those scenes was so frustrating because she's just so powerless and any second you could be decimated, so you just have to be submissive which is extremely frustrating."

She pauses to think for a second, then continues, "But with Jemma, she has always had this thing [where] she's always had to be rescued. I think being on Maveth and having to fend for herself was really good for her character and really built some self esteem back up, that, 'OK, I can handle stuff on my own.' And then now she's right back in a position where she feels completely helpless."

As Wen quips that Simmons is only helpless because she "had that thing in [her] ear, because otherwise you would kick some ass," Henstridge laughs.

"You'd hope so, but not being able to communicate is really — it's such a clever way to torture somebody, because as humans, that's what we do," Henstridge says. "That's where we find comfort and express ourselves. It was hard for her."

And with Fitz nowhere to be found in both parts of "Orientation," where is he? When will he return to the show?

"He … might be turning up in space sometime," De Caestecker teases. "But he’s not there right now. That’s my answer, and I’m sticking to it. That’s the answer they wrote down specifically. I worded it verbatim."

After pushing him for more information on when Fitz will pop up on the series, the usually-cagey actor relented. But only slightly.

"He … well … I don’t know if I can say when, exactly, but it’ll be after episode 2," he says with a laugh, knowing that everyone will have seen episode 2 by now. "At some point past [that]. But, yeah, he’s somewhere. I really want to tell you guys everything, but I can’t. Basically, I’m allowed to talk about, like, Fitz is still kind of grappling with what happened last season, being in the Framework."

As for Daisy, finding out you were the cause for the end of the world is a lot to take on. "Honestly, at first, I think she doesn’t believe it," Bennet says. "Not because she doesn’t think, 'I wouldn’t do that.' She’s just genuinely, 'No, I’m literally not powerful enough, I don’t know what you’re talking about. But I need to find my friends.' So I think her focus is really just kind of, not ignoring what Deke is telling her, but kind of going, 'You’re kind of crazy, I don’t know what you’re talking about, but my main focus is that my friends are safe and that we get the fuck out of here.'"

But as the season goes on and the "more it comes up," Bennet promises that Daisy will start to take that more seriously.

"It does end up haunting her a little bit, and it’s yet another issue that she gets to have," she says. "Because having eight dead boyfriends and a dead parent, and then a dad who’s brainwashed and working as a vet in Indiana, and, you know, having almost died, that’s not enough, apparently!" Daisy really can't catch a break.