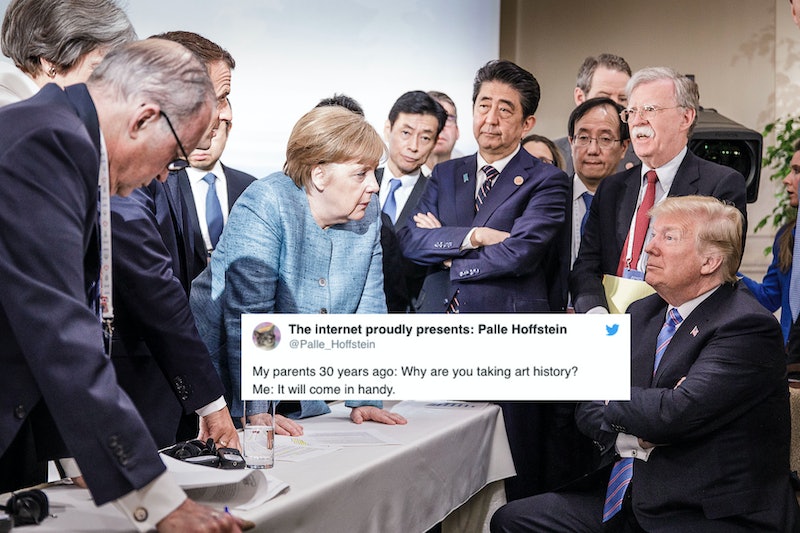 The current reaction to world politics seems to be "laughing to keep from crying," so it's not super surprising that a dramatic picture of President Donald Trump and German Chancellor Angela Merkel immediately got people talking. An op-ed in The Guardian notes that it was quickly compared to a Renaissance painting by sharp-eyed Twitter users who thought the picture looked familiar. But we've got it all wrong — the photo is decidedly not Renaissance, according to one Twitter user whose thread on the subject went viral, and they were gracious enough to explain why to the rest of us.

The photo is so masterful that Snopes had to fact-check it — it's so artful, it's easy to believe that the whole thing was created by someone with Photoshop skills. But it's real, and it shows an exasperated-looking Merkel talking down to Trump, who is sitting defiantly with his arms crossed while other leaders stand around him. Japan's prime minister Shinzo Abe and U.S. national security adviser John Bolton watch it all unfold, along with a slew of other important people. But Twitter user @Palle_Hofenstein pointed out that we were getting a lot of stuff wrong in our initial takes about the picture.

What's the difference between Baroque and Renaissance paintings, you ask? Does it even matter? If you're not art history-inclined, it may seem like meaningless pedantry, but you may have been describing Renaissance art incorrectly for a long time. Unlike Baroque pieces, Renaissance works are staged and almost make you feel like you're watching a play, per @Palle_Hoffstein.

Baroque art, on the other hand, feels natural — almost like you're a fly on the wall. @Palle_Hoffstein points out that Baroque pieces "reflect energy between the subjects," and it's pretty easy to see the parallel between the below artwork and the Trump and Merkel photo.

@Palle_Hoffstein took the time to educate us all, and it's pretty useful information. Famous Renaissance artists include Donatello, Michelangelo and Leonardo da Vinci, and the art originated in the 13th and 14th centuries. Baroque, on the other hand, claims art legends like Caravaggio and Rembrandt and began to flourish in the 17th century. Once you understand the difference between the art eras, it's remarkable just how much the G7 photo looks like a classic baroque painting.

It's essentially a reminder that there's nothing new under the sun, even though the Trump presidency seems to bring new surprises every day. We've coped by making memes out of the outlandish decisions made by the president and his administration, but this is one that actually provides some interesting knowledge. For their part, @Palle_Hoffstein credits an art history course for the knowledge that was shared, and we're all grateful for their notes. Most of us don't remember anything from those courses we picked up in high school or college for extra credits, so it's pretty impressive.

An article from Arts, Artists, Artwork, a website for artists to sell their work, shares the differences between Baroque and Renaissance in even more detail. Fascinatingly, Baroque paintings are known for strong lines, and one Twitter user pointed out that the G7 picture fits the criteria used to identify whether a piece is from the Baroque era.

Photographer Jesco Denzel, who captured the now-iconic image, declined to provide comment to Snopes about the photo going viral, but he did more than capture the tensions between the U.S. and our allies in a photograph. He unintentionally created a classic piece of art, although it's fair to say that the people in the room helped compose it for him. Thanks to Twitter, we're all slightly more knowledgeable about it all.