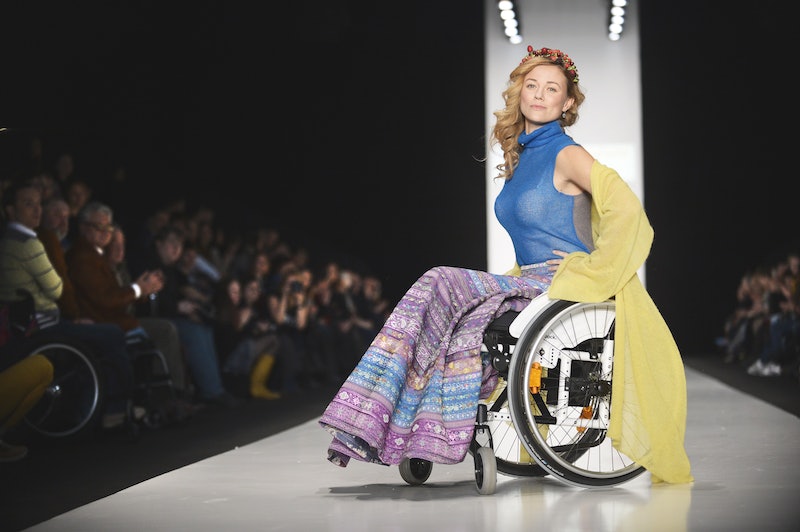 Driving home from Thanksgiving two years ago, Karin Hitselberger was confronted with what she calls an “accidental supernova” of sorts. It came in the form of Kylie Jenner — more precisely, her S&M-style photo shoot for Interview magazine, where Jenner donned a black leather dog collar while seated atop a gilded wheelchair. But for Hitselberger, a 26-year-old fashion blogger, the wheelchair was something that could not go ignored. It was a misguided symbol of an ableist world.

“For me, a full-time wheelchair user, my wheelchair does not represent limitations and restrictions; it represents freedom,” she wrote on her blog, Claiming Crip, in reference to her own experience living with cerebral palsy. “I am limited by a world that does not see disabled people as being fully equal to non-disabled people.”

The essay went viral, setting the tone for what has become an increasingly indomitable topic of our time: how fashion — and society at large — so often mischaracterizes, misrepresents and misunderstands what it means to be disabled. And given the fact 53 million Americans live with a permanent disability, it’s a reality that needed to be discussed.

“We may think of fashion as a very surface-level thing, but it gets to the core of how you present yourself to the world,” Hitselberger later tells me. “Just because I'm physically disabled doesn't mean I don't have my own style, and fashion can't be something that I care about.”

This is a common misconception, Hitselberger says, and it's one that needs to first change from within the industry itself. But where to begin? Well, not using wheelchairs as a publicity stunt is a start. From there, it’s about recognizing the way we perceive fashion, style, and proper representation as a whole. Most of all, though, it's about breaking down the societal perception that just because someone is physically disabled, fashion shouldn’t matter for them as much as function.

Luckily, this is an idea that we’ve seen eroding in recent years. Last February during New York Fashion Week, FTL Moda made headlines when the Italian fashion company recruited disabled models to appear in its runway show. The catwalk featured the likes of Shaholly Ayers, a congenital amputee, and Madeline Stuart, an 18-year-old Australian model with Down’s Syndrome. And who could forget the badass brilliance of Jillian Mercado, a model with spastic muscular dystrophy, who before being signed onto Beyoncé’s ad campaign, became the face of IMG Models, and the force behind the 2014 #DieselReboot campaign.

It's no wonder disability has recently been dubbed fashion's “next frontier" by publications like the New York Times, and it’s one that Stephanie Thomas, a disability fashion editor and stylist, says is ripe for transformation — off the runway.

“Designers are putting models with disabilities in their fashion shows, but few of the people can actually wear the clothing they're being put in on a regular basis,” she tells me. “The irony is — we have clothing for pets, but we don't dedicate any retail real estate for people with disabilities and seated body types.”

As the editor-in-chief of Cur8ble, a fashion and lifestyle website that relaunched with a new design on Jan. 17, Thomas is looking to change how the disabled community is perceived — not only as people, but as viable fashion clientele. The crux of her mission is Cur8ble, a place where actors, athletes and other visionaries living with a disability can bring exposure to designers and brands on the forefront of “adaptive” and mainstream fashion today.

Brands like ABL Denim, a company that specializes in stylish jeans for wheelchair users, and offers products equipped with flexible elastic waistbands and high-back designs that prevent pants against drooping low when seated. Or ALLELES, a Vancouver-based company, which operates its own design lab for individuals in search of custom art prosthetic covers for legs and arms.

Thomas praises other adaptive brands like Chairmelotte, self-described “wheelchair couture” that features two-piece dresses and back-buttoned shirts; items that are generally more accessible for seated individuals. Another standout label was IZ Collection, crafted from the mind of Toronto’s high-fashion designer, Izzy Camilleri. Since 2009, the collection has been a trailblazer in the world of adaptive fashion — its closest competitor is in Germany, making the company one of the only North American labels that follows the line of a seated person.

But as of the end of this month, IZ Collection is shutting down.

“One of our several challenges was the fact that there's no wholesale opportunities for this — there's no market for [adaptive fashion] in the mainstream retail world,” Camilleri tells me over the phone. “The return was just too slow, and the growth was, again, too slow.”

“It was quite devastating to a lot of our customers,” she added, “But at the same time, we got a ton of emails from people saying how grateful they were for what we did, and how it changed their lives.”

Looking forward, Camilleri says fashion will have to be universalized in a way that brings adapted options more into the mainstream. For designers, that can mean making small adjustments, like enhancing the button size on shirts to help people who suffer from arthritis. More than anything though, Camilleri wants people to realize just how much adaptive clothing could benefit from a modern facelift. “Most of what’s out there is geared toward the elderly and people that live in long-term care,” she said. “It’s all polyester and looks like it’s been designed in 1972.”

The problem? Of the approximately 5.4 million people living with paralysis in the U.S., three-quarters are under the age of 65. And yet, what’s available to them, in terms of size and style, remains incredibly limited.

Herein lies an opportunity for radical change, and few mainstream designers are catching on. Last year, Tommy Hilfiger made a prescient statement by partnering alongside Runway of Dreams, a non-profit that works with the fashion industry to develop adaptive-clothing designs for consumers. By doing so, Hilfiger became the first ever American fashion brand to craft an adaptive, designer-name collection for children. ABL Denim also became available online at Walmart.com, marking a seminal move made by a big-time retailer.

All things considered, while there is movement on the fashion front to be more inclusive, these are still exceptions to the rule. On top of removing the stereotypes that surround disability, there needs to be a concerted effort by mainstream designers to offer accessible, design-friendly, and stylish options that do not forsake fashion in lieu of form. Because with such a marketplace comes the opportunity for other designers, like Izzy Camilleri, to continue creating clothing that works within the realm of disability, and diversity.

This is also a dream for people like Karin Hitselberger, who devote their lives to studying an art that is more about self-expression than any high-end piece of fabric money could buy.

“The whole idea behind choice in fashion comes from an emotional need to express yourself in a way that is authentic,” she said. “We can act like fashion is an exclusive club, but clothes are a standard of our society. Everybody wears them.”

“So the idea of living somewhere where you have clothes that fit you and your body, and you have a choice that allows you to fit into an aesthetic that makes you feel confident, beautiful and fierce,” she added. “That’s what I want to see.”