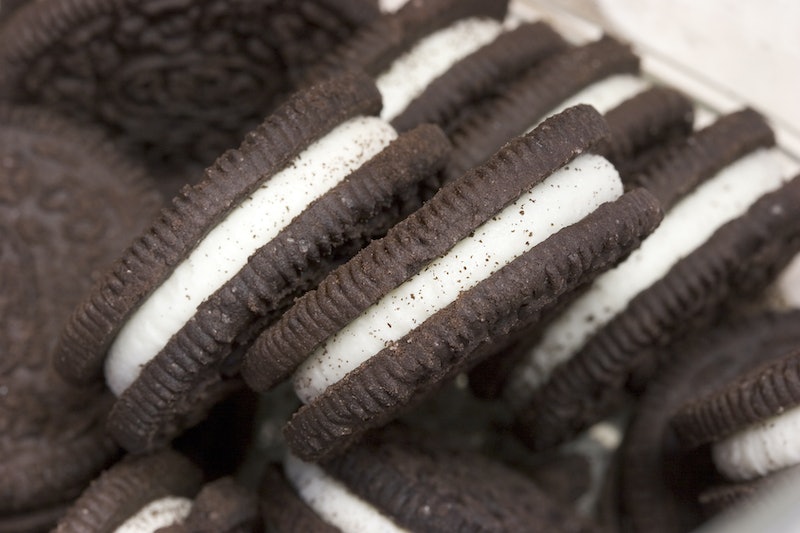 I am generally a fan of fall and winter, but the one strike that the colder seasons have against them in my book is that ice cream — which I also love — is kind of a no-go during those times of the year. But hey, guess what? Just in time for spring, summer, and ice cream season, I have discovered something magnificent: A 10-inch Oreo ice cream roll exists. My cookies-and-cream-flavored soul is weeping with joy, even as I brace myself for months of feeling overheated and gross most of the time.

To be fair, this log of frozen bliss isn’t exactly new; it’s been making the rounds on Instagram for some time. Indeed, two of the oldest images posted under the #oreoicecreamroll hashtag — one of which is definitely the product in question, as evinced by the box in the shot — date all the way back to 2012. Ridiculous and amazing foods know no boundaries when it comes to time and space, however, so it’s not exactly surprising that the Oreo ice cream roll has leaped into the spotlight now, even after all those years have gone by.

Nestled under the umbrella of the company Rich’s Products Corporation, the Oreo ice cream roll is “a delicious combination of vanilla-flavored ice cream blended with OREO cookie pieces and coated in OREO cookie pieces,” according to its product description. For the curious, Rich’s variety of ice cream cakes are all on display on a website run by the company that is literally called I Love Ice Cream Cakes; in addition to the Oreo roll, there’s also a straight-up Oreo ice cream cake, as well as listings for other ice cream cake brands like Carvel and Jon Donaire that are apparently available at grocery stores and retailers thanks to Rich's. (Also, fun fact: Rich’s founder, Robert Rich, created the first non-dairy whipped topping in 1945, according to the New York Times.)

I would argue, though, that none of the desserts on offer at I Love Ice Cream Cakes are quite as spectacular as the Oreo ice cream roll. I mean, it’s a giant roll of cookies and cream ice cream that has also been completely covered in Oreo cookie bits — and it feeds eight people, to boot (although as PopSugar’s Victoria Messina recently observed, “Apparently the human who made that suggestion isn't quite aware of the rabid Oreo-inhaling tendencies of [fans] around the world, myself included”).

The big question on everyone’s brain, of course, is, “OK, awesome, great — but where can I get it?” The good news is that I Love Ice Cream Cake’s product page has a handy-dandy store locator on it; all you have to do is input your ZIP code and the website will tell you what retailers in your area sell it. But the bad news is, that doesn’t necessarily guarantee that the stores that typically carry it definitely have it in stock right at this very minute.

Allow me to speak from experience: While I was starting to work on this piece, I was thrilled to discover that the grocery store across the street from my apartment ostensibly carries this ice cream marvel — which, in turn, led to grand plans for me to go out, get one, bring it back home, photograph it, and taste test it so I could share with the world at large what the dang thing is actually like. Alas, though, when I ran across the street to pick one up… it turned out that it was out of stock. They had just about every other kind of Oreo dessert you can find in the frozen section, from Oreo Klondike bars to Oreo churros — but not the one thing I had actually gone there for.

Dejected, I returned home empty-handed. Clearly, I should have actually phoned the store to double-check whether the ice cream roll was available before I got my hopes up.

Maybe you’ll have better luck than me, though. With most Instagram reviews consisting of simple, one-word descriptions of the dessert as being “heaven,” I hope you do. Godspeed, my friends. May the Oreo deities smile upon you.

Or you can always try making your own with this recipe. Just sayin'.