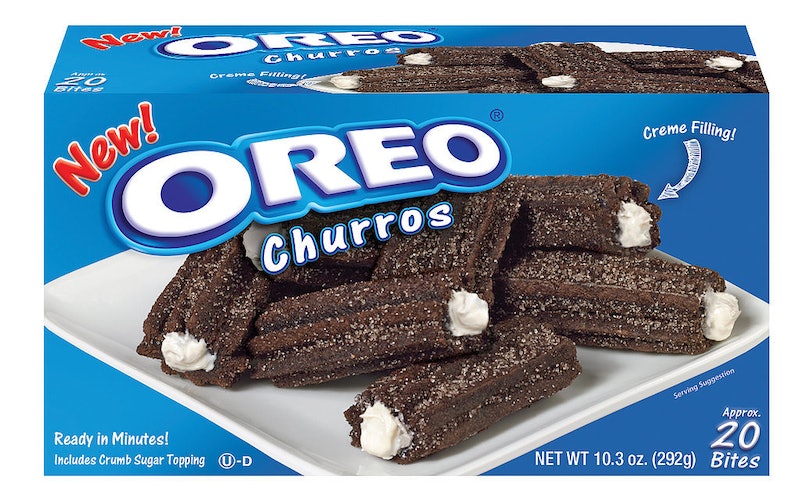 Think of the most amazing combination of snack foods possible. M&M's and cookies? Reese's Peanut Butter Cups and cupcakes? Nothing you could have imagined comes close to the fact that Oreo Churros are a real thing now — one you can actually purchase at a grocery store — and they look absolutely delicious.

Of course, there have been numerous Oreo-inspired churros recipes floating around on the Internet for years now; furthermore, Oreo churros have been available at places like movie theaters and sports and concert arenas for some time as well. But now, J & J Snack Foods has officially released Oreo churros you can buy in the freezer aisle of your local supermarket. It's time to stock up.

According to a press release, the churros in question are 10-inch-long tubes filled with Oreo's signature, addictive creme. Not only that, but they also come with a cookie crumb pack in which you roll the churros after heating in order to "enhance the real Oreo Cookie flavor." Fancy.

"We were overwhelmed by the national buzz surrounding the original Oreo Churros, so immediately began working on a product line extension," said Gerry Shreiber, CEO and President of J & J Snack Foods. The original Oreo Churros to which Shreiber refers were released in 2014 and were more of a solid cookie that was dipped into creme. The new Oreo Churros are more like awesome, squishy Twinkies, and I can't wait to get my hands on them.

This isn't the first time we've seen a treat that might best be filed under the heading of Not-Quite-Oreos, though — so in celebration of this new miracle, here are some of the best non-Oreo Oreos ever created.

These pillowy creations (which were basically tiny Whoopie Pies) represent one of snack food's Golden Ages. Cakesters were essentially two of the fluffiest pieces of cake ever fused together with classic Oreo creme. Research reveals they have been discontinued, but there are plenty of recipes out there for you to make your own at home.

Fudge Cremes are a thinner, chocolate covered version of the original Oreo. They come in a few different varieties, but the peanut butter-filled are clearly the most superior. They pretty much give you the feeling of eating Girl Scout Cookies all year around, and that's never a bad thing.

Cookie straws really came into their own during the early 2010s, with FunStix being Oreo's contribution to the trend. Being able to dunk your cookie, eat it, and drink milk with it, all at the same time? Now that's what I call epic.

This cereal has become pretty legendary. It was discontinued in the United States in 2007, but it's still available in South Korea. Some Americans have even gone so far as to find ways to import the cereal so they can recapture the glory of their childhood breakfasts. That must be one darn good cereal.