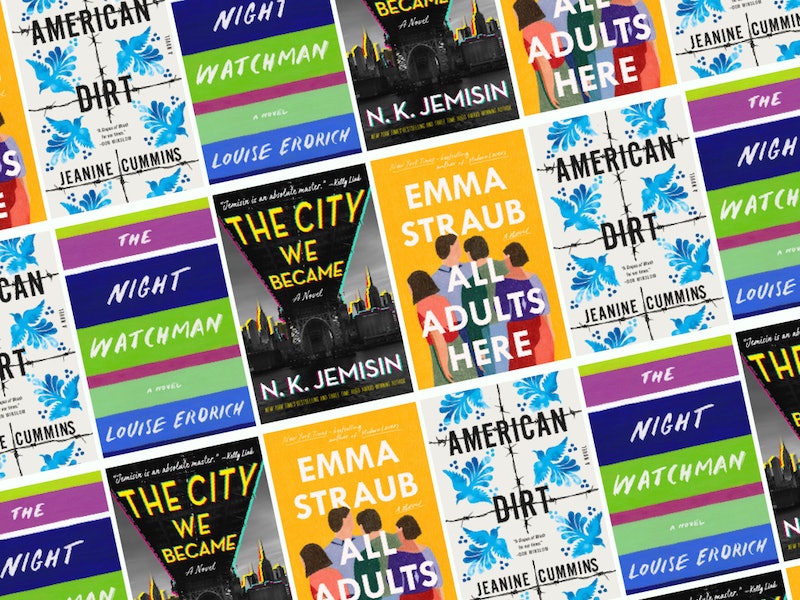 It's 2020 now, and you know what that means — a new year full of new books ahead! Goodreads users have chosen their 10 most anticipated books of 2020, and I've got the inside scoop on each of them here. All of these books are available for pre-order today, so feel free to start planning your 2020 TBR right now.

If you thought 2019 was full of great releases, wait until you get a load of what 2020 has to offer. In addition to long-awaited sophomore novels from Station Eleven author Emily St. John Mandel and Homegoing author Yaa Gyasi, this year will bring new books from Louise Erdrich, Ottessa Moshfegh, and Anne Tyler, among others. January 2020 alone will see new releases from Isabel Allende, Maureen Johnson, and C.J. Tudor, so you can bet that this year in books will be hot, hot, hot.

Whether you already have your 2020 TBR all planned out, or you don't know where to begin reading through this year, any of the 10 highly anticipated books on the list below is a terrific starting point. Remember, regardless of what anyone else says, you just have to take this year one book at a time.

According to Goodreads users, the 10 most anticipated books of 2020 are:

When her estranged sister goes missing, a police officer investigating a series of local murders becomes concerned that the two cases may be linked. Mickey has always kept an eye on Kacey, who lives rough and with substance addictions. But now Kacey is missing, and Mickey must race to solve both her disappearance and the multiple-murder case before it's too late.

Set in Acapulco, Jeanine Cummins' American Dirt centers on Lydia, a bookstore owner raising her young son with her journalist husband. When a new customer shows up, Lydia is pleased to find that he shares her taste in books. There's just one problem: The man is the head of a local drug cartel, and he's not going to be happy when Lydia's husband publishes a profile on him.

A budding romance between two teenagers sparks tension in a North Carolina neighborhood in this novel from A Well-Behaved Woman author Therese Anne Fowler. Valerie has raised her biracial son, Xavier, in Oak Knoll, and is preparing for life without him as he approaches the beginning of his college career. The entrance of a wealthy man and his family to the neighborhood disrupts Valerie and Xavier's life, as a construction project mars their previously scenic views, and the boy begins to fall in love with his new neighbor's daughter. Tragedy awaits both families, however, and none of them will ever be the same.

Louise Erdrich's latest novel weaves its narrative between residents of the tightly knit Turtle Mountain Reservation in North Dakota. At a local jewel bearing plant, Chippewa Council Member Thomas works as a security guard, and Patrice takes long shifts to sock away money until she can join her big sister, Vera, in Minneapolis. But the city can be a dangerous place, as Patrice will soon learn.

Nearly two decades ago, then-15-year-old Vanessa was manipulated into an abusive "relationship" with her 42-year-old teacher, Jacob. Now, someone has accused Jacob of sexual misconduct, and Vanessa must question her own agency in the events that transpired between the two of them. She's always considered herself a willing and informed participant, but was she really?

The long-awaited sophomore novel from Station Eleven author Emily St. John Mandel, The Glass Hotel centers on the troubled Paul and his younger sister, Vincent, as they move through young adulthood in the increasing uncertainty of the late 1990s and early 2000s. Never intimately close or completely separated, the siblings move in one another's orbit for years, through Paul's substance addiction and Vincent's marriage to a Ponzi schemer.

After setting all sorts of records with her award-winning Broken Earth Trilogy, N.K. Jemisin is back with The City We Became, a fantasy novel about New York City's fight to save itself from an eldritch evil called simply "the Enemy." Weakened from an ongoing battle, NYC calls forth avatars from each of the five boroughs to defend itself from the encroaching Enemy, but those five, very different people will have to work together in order to stop her — a cause that soon begins to seem lost as one avatar refuses to associate with the rest.

All Adults Here by Emma Straub (May 5)

A woman confronts her own shortcomings as a mother in this new novel from Modern Lovers author Emma Straub. Astrid Strick has raised three children, each of whom is now an adult living a life Astrid struggles to understand. As she ponders over what may have gone wrong in her parenting, she gets a second chance when her 13-year-old granddaughter is bullied and subsequently needs a new place to lay her head.

The Ballad of Songbirds and Snakes by Suzanne Collins (May 19)

A prequel to Suzanne Collins' game-changing YA trilogy lands in stores this year. Set during the 10th Hunger Games, more than 60 years before the events of the first novel, The Ballad of Songbirds and Snakes takes readers deep inside Panem's post-war period, when the Reapings were still relatively new. Not much is known beyond this about Collins' new novel, but Tributes will certainly flock to the new book when it arrives in stores this spring.

Following up her 2017 American Book Award-winning Homegoing, Yaa Gyasi will publish her sophomore novel later this year. Transcendent Kingdom centers on Gifty, a Ghanian-American doctoral candidate on a mission to discover why addiction put an end to her brother's bright future, and why her mother wants to follow him to an early grave. As she studies addiction in mice, Gifty feels a strong pull back toward the religious aspects of her childhood, which may provide her with more questions than answers.