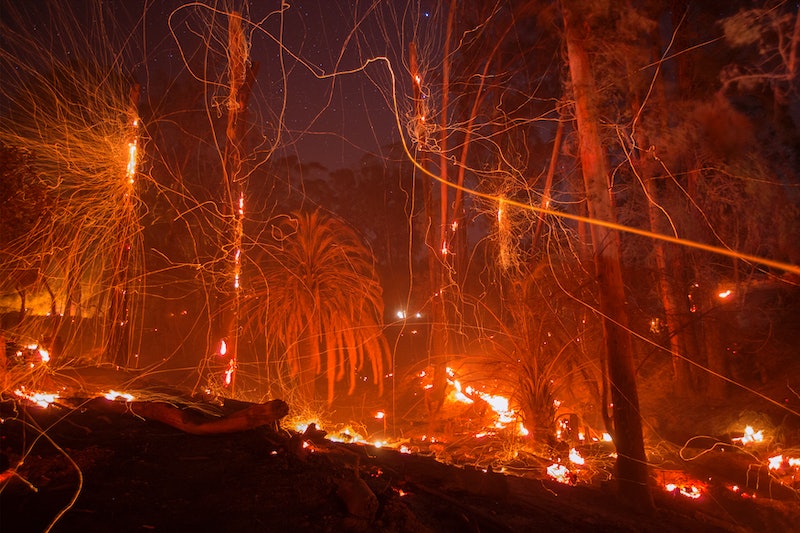 If you thought that 2017 involved a lot of disasters and near-misses, you'd better brace yourself for 2018. The World Economic Forum has released a global risk assessment report on Wednesday, and it says that threats to the world have overall "heightened" this year.

The WEF always releases this report before its annual meeting, taking place this year from Jan. 23 to 26. Global leaders like President Trump and France's President Macron are set to attend, and the report indicates that there will be a lot of grim topics on the agenda, including danger of nuclear weapon usage, cyberattacks, and data fraud — all of which are listed as more likely to be a threat in 2018 than they were in 2017.

But there is a silver lining: The report notes that the world is projected to experience continued economic growth this year, which could provide countries with the opportunity to implement changes to mitigate these potential disasters. On the other hand, the WEF also says that the trend of countries mostly caring about themselves could negatively impact the ability to stop the threats.

A trend towards nation-state unilateralism may make it more difficult to sustain the long-term, multilateral responses that are required to counter global warming and the degradation of the global environment.

The report rates risks based on both the likelihood of their occurrence and their potential impact. Here are some of the most notable dangers for 2018.

The WEF listed extreme weather events as the most likely and second-worst possibility (it held these same rankings for the 2017 report).

Last year brought devastating hurricanes in Puerto Rico, the Virgin Islands, Texas, and Florida; the worst wildfire season that's ever been recorded in California; and an especially active tornado season — and that's just in the United States. With these examples in recent memory, it's not hard to imagine the potential catastrophes of 2018.

Natural disasters are the second-most likely and third-worst possibility. Unlike the extreme weather category, "natural disasters" encompasses environmental events that are not just more extreme versions of normal weather (weather is defined as daily atmospheric changes) — this includes earthquakes, volcanoes, and tsunamis, for example.

Like the previous category, however, this risk is linked to the increasing impact of climate change. The report noted that its younger respondents rated this risk as likelier and higher-impact than its older respondents. A 2017 survey from the WEF showed that millennials believe climate change to be the greatest problem facing the world today.

The WEF rated weapons of mass destruction as the disaster that would have the highest impact, but also gave it a likelihood rating of 3.0 — far below average, and one of the least likely scenarios imagined by the report.

However, the WEF noted that the probability of weapons of mass destruction being used has increased since last year.

The escalation of geopolitical risks was one of the most pronounced trends of 2017, particularly in Asia, where the North Korea crisis has arguably brought the world closer than it has been for decades to the possible use of nuclear weapons.

Cyberattacks are the third-likeliest threat, and that's a higher ranking than it ever has received before. After 2017 brought attacks like WannaCry, Petya, and NotPetya — which hurt companies, hospitals, and governments around the world in the spring and summer, causing hundreds of millions of dollars in damage — experts have decided that this risk is more relevant than ever.

The failure to fight against climate change would be the fourth-worst disaster. In 2017, the United States took steps both forward and backward on this issue. President Trump withdrew from the Paris Climate Agreement in June, but local governments, companies, and universities have stepped up in response and committed to following the terms of the agreement anyway.

Data fraud and identity theft is the fourth-likeliest disaster. On an individual level, this could mean repeats of events like the infamous Equifax breach in September.

However, the implications on a broader scale could be even more worrisome — the WEF reports that there were attempts to steal data or install viruses in U.S. nuclear power plants last year.

The report notes that 8 million new tons of plastic waste enter the world's oceans every year, and that 83 percent of the tap water on Earth contains micro-plastic fibers. Flint, Michigan, still does not have clean drinking water.

The risk of a food crisis is heightened by the fact that the world gets three-quarters of its food from only five animal species and a dozen plants, according to the U.N. Food and Agriculture Organization.

If corn production fails at once in the United States and China (the globe's largest producers), the results would be catastrophic, and the report notes that there's currently a 1-in-20 chance that this could happen in every decade from now on.

The largest refugee crises of 2017 involved migrants from Syria, Afghanistan, Africa's Lake Chad basin, South Sudan, and Somalia. People in these countries are fleeing violent conflict, famine, drought, oppression, and other crises that aren't likely to resolve in 2018. The U.N. Refugee Agency reports that the number of displaced people worldwide just keeps increasing every year.

The category of man-made threats encompasses disasters like oil spills, chemical plant explosions, and eccocide (destruction of the environment).

In November, the Keystone Pipeline leaked hundreds of thousands of gallons of oil in South Dakota; however, both President Trump and Nebraska regulators have approved the continued construction of the pipeline.

"Biodiversity loss is now occurring at mass-extinction rates," the report reads, noting that populations of vertebrate species decreased by around 58 percent between 1970 and 2012. The report indicated that its female respondents rated this risk as likelier and higher-impact than its male respondents.

With so many increased dangers facing us, it's worth pointing out that we're also seeing a worldwide trend of heightened activism. When global leaders congregate at the WEF meeting later this month, many may be spurred on by the fact that they have engaged citizenries holding them accountable at home.