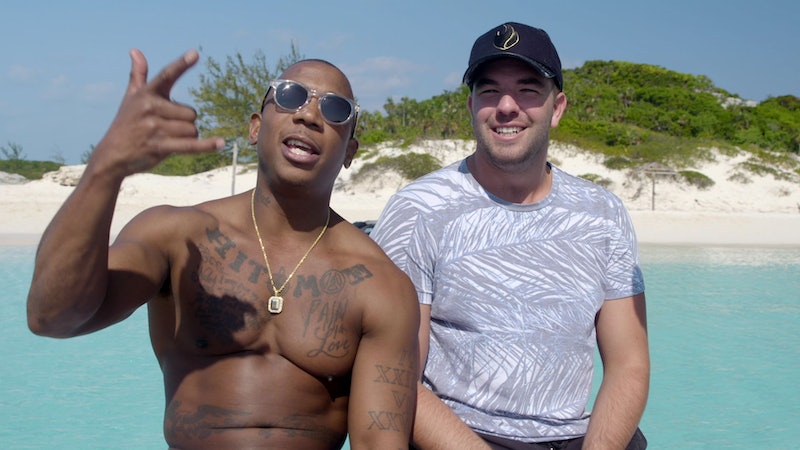 On April 28, 2017, it seemed like all anyone could talk about was Fyre Festival. And while many probably assumed that the failed luxury music event was a flash in the pan — something for everyone who wasn't there to briefly bond over on Twitter — it's still a hot topic almost two years later. On Jan. 18, Netflix released a Fyre Festival documentary that has an impressive amount of footage from the making — or not making — of the festival, and shows that the action behind-the-scenes of the event was even wilder than you may have thought.

The new doc, simply titled Fyre, is directed by Chris Smith (Jim & Andy: The Great Beyond) and produced with Vice Studios and Jerry Media. Jerry Media also worked on Fyre Festival, which explains, in part, how the film is able to have so much behind-the-scenes footage and information. As for all the other info included, basically, there are a lot of people who worked on the festival who are holding a grudge against the man behind it, Billy McFarland. (McFarland co-created the festival with Ja Rule, but it was meant to promote a music-booking business he already owned called Fyre.)

First of all, Fyre Festival ended up being the perfect subject for a documentary not only because it was a massive failure that swept the nation, but because McFarland wanted everything leading up to the festival recorded. (There's even footage of him in the film from when he was out on bail after the festival.) Of course, when you have everything recorded, but then are convicted for fraud and screw over all the people you worked with, they're going to be willing to use that footage and share everything they know.

2. The Details Of The Promo Shoot

A few months before Fyre Festival was set to begin, a promo video featuring models, including Bella Hadid, Chanel Iman, and Hailey Baldwin, was released. When this video was being shot, everyone involved really was partying and just hanging out. But, as the film shows, the shoot included McFarland passing out on the beach in the middle of the day, and Ja Rule yelling at models to go in the water at night, with their reaction basically being, "Um, no. You go in the water."

3. The Amount Of People With Tickets Couldn't Fit On The Original Island

A man named Keith who worked on the festival for some time explains in the documentary that he was kicked off the team when he kept expressing logistical concerns. For one, he tried to explain that the amount of attendees could not reasonably fit on the original island that they were going to use. (They ended up having to move islands anyway, because this thing was a total mess across the board.)

4. The Way The Musicians Were Booked

A Fyre employee named Samuel Krost is featured throughout the film and explains that he was the one to book the artists even though he'd never done that kind of work before.

Attendees of Fyre Festival could rent tents or "villas" to stay in, but they ended up being far from luxurious. According to the film, the tents used were actually hurricane tents left over from Hurricane Matthew. Also, they were decorated with what appear to be Ikea Lack side tables — well known as the least fancy tables in the world.

In an effort to raise more money, McFarland tried to get attendees to add money to wristbands that they could use to buy things while at the event. This involved people getting phone calls from someone telling them they should add money and claiming that the majority of attendees were adding around $3,000.

As the festival drew closer, ticket holders started asking more and more questions on Fyre Festival's Instagram about things like amenities and lodging that had not yet been confirmed. Eventually, the organizers and their publicity firm just started deleting negative comments off the account.

8. This Email Someone Working On The Festival Received

A man named Marc Weinstein who was working on the festival wanted it to be canceled as it drew nearer, because he knew people actually getting there and seeing the state of things would be worse than that. In response to a lengthy, professional email, he was told, "At least they will see your smiling face and yoga skills."

9. How They Solved Their Water Problem

The most shocking story in the documentary by far comes from a man named Andy King, an event producer who had known McFarland for years and wanted the festival to be a success because they were already in so deep. At one point, the massive amount of bottled water that was ordered for the festival was held at Bahamian customs, which needed $175K in fees, that Fyre didn't have right away. So, McFarland called King, and according to King said, "You're our wonderful gay leader and we need you to go down. Will you suck dick to fix this water problem?" And he was actually prepared to do it. He went down to the office, but the head of customs, who he says "couldn't have been nicer," told him they just needed to be one of the first places to be paid.

After he was arrested for fraud in relation to Fyre, while he was out of bail, McFarland continuing defrauding people through selling fake event tickets via NYC VIP Access, which is also shown in the documentary because he was still having things recorded. In October 2018, he was sentenced to six years in prison, three years probation, and to pay restitution of $26 million, according to NPR.

11. Bahamians Who Worked On Setting Up The Festival Weren't Paid

When the Fyre Festival debacle happened, it was easy to sit at home and debate whether it was OK to make fun of the attendees who were clearly wealthy enough to shell out so much money for a music festival in the first place. But, lost in that conversation was the fact that they were far from the only victims here. The documentary shows that people who worked for Fyre — the app, not the festival — such as engineers and designers, lost their jobs. Some even spent money for the festival on their personal credit cards. And on top of that, there were the many Bahamian locals who set up the event site and who are still owed a total of $250K, according to the documentary.

So, yeah, the Fyre Festival documentary is both eyeopening and still unbelievable, even two years after we all watched that infamous sandwich circulate on Twitter.