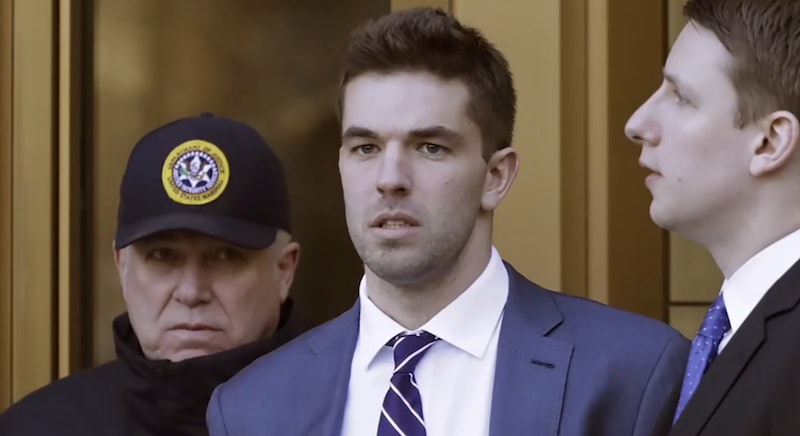 A punishment has been decided for the perpetrator of a high-profile, multimillion-dollar scam. Fyre Festival organizer Billy McFarland's prison sentence was handed down in New York federal court in Manhattan on Thursday, Oct. 11, and, as reported by VICE News, the 26-year-old tech entrepreneur will spend six years behind bars. The sentencing followed McFarland's March guilty plea to two counts of wire fraud related to the disastrous 2017 multi-day Bahamas getaway, billed as a luxury "once-in-a-lifetime musical experience." In the end, however, it was anything but luxurious for fans and also left McFarland's investors stiffed on $26 million, per the news outlet.

“The remorse I feel is crushing,” McFarland said before a packed courtroom, according to VICE News. “I've lived every day with the weight of knowing that I literally destroyed the lives of my friends and family.”

Among the famous names affected by the debacle were rapper and Fyre Festival co-organizer Ja Rule, who was also named in a 2017 $100 million class action lawsuit for fraud, breach of contract, and negligent misrepresentation, as reported by Variety. Also brought into the fray were models and social media influencers like Bella Hadid, Kendall Jenner, Emily Ratajkowski, Hailey Baldwin, Chanel Iman, and Alessandra Ambrosio — all of whom were paid to promote the event via their social media channels and also appear in a tropical-themed video advertisement for the event.

For those needing a a refresher, the sold-out Fyre Festival — with ticket prices ranging from $5,000 to $250,00, per Rolling Stone — was slated to take place over two weekends in April and May 2017 on a Bahamian island, which organizers falsely claimed in promotional materials was once owned by Columbian drug lord Pablo Escobar, according to Variety. Among the dozen of scheduled performers on the bill: Tyga, Desiigner, Pusha T, Major Lazer, and headliners Blink-182 who canceled their performance just before Fyre Festival was scheduled to commence.

Several attendees arrived on the island ahead of the event to find "a garbage-filled, unfinished festival site that barely resembled the experience they hoped the thousands of dollars spent would provide," as also reported by Rolling Stone. As seen in photos from the Fyre Festival posted on social media, luggage was mishandled, and tents and prepackaged sandwiches replaced the luxury villas and gourmet meals festival-goers had been promised.

Mere hours before the much-hyped first weekend of events was scheduled to begin, organizers issued a statement that the Fyre Festival has been “postponed," (but then eventually canceled), per People. Ja Rule also issued an apology via Twitter, writing that he was "heartbroken" and assuring his followers that Fyre Festival "was NOT A SCAM as everyone is reporting." Added the rapper, "This is NOT MY FAULT... but I'm taking responsibility."

According to NBC News, in July McFarland pleaded guilty to more fraud charges stemming from a separate ticket-selling alleged scam called “NYC VIP Access.” Around the same time as the Fyre Festival, McFarland was able to make $150,000, per a statement from U.S. Attorney Geoffrey S. Berman, by selling alleged phony ticket to fashion, music and sporting events such as the Met Gala, the Grammys, and the Victoria’s Secret Fashion Show.

As also reported by VICE News, McFarland said “I’m sorry” multiple times before receiving his sentence from U.S. District Court Judge Naomi Buchwald and also begged for leniency, saying he had faced violence in prison and that “the best way to be sorry is through my future actions.” McFarland's attorneys had also previously claimed that "he had been diagnosed with untreated bipolar disorder, preventing him from knowing right from wrong."

But Buchwald stated, per VICE News, “It is my conclusion based on all the submissions that the defendant is a serial fraudster and that to date his fraud, like a circle, has no ending," adding that the reported bipolar diagnosis does not excuse his behavior.

In addition to the six years (of a possible 20 years) for convictions on three counts of wire fraud, one count of bank fraud, and one count of lying to investigators, he was also ordered to pay back $26,182,386, also according to the VICE News article.

Now that the McFarland's sentence has been determined, hopefully victims of the scams will feel some level of justice has been served.