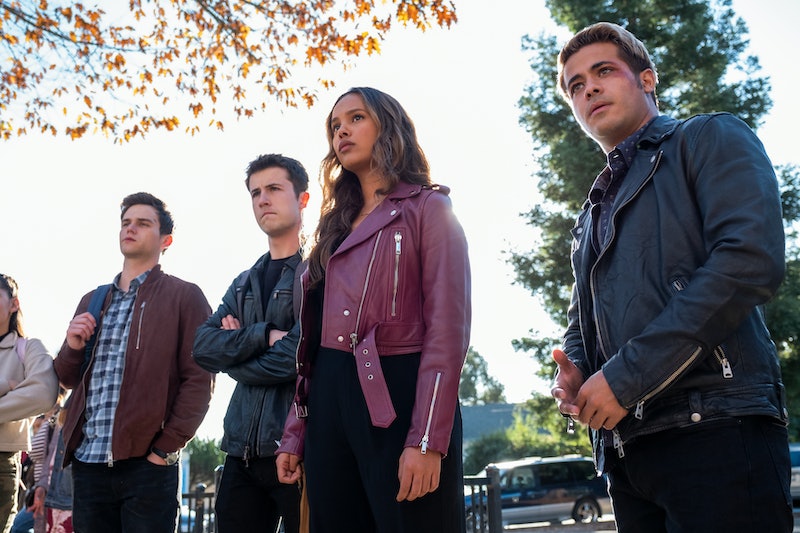 Clay Jensen and his friends cannot catch a break. Just when it looked like they could move on from their traumatic high school years and graduate triumphantly, their secrets might come to light one more time. The 13 Reasons Why Season 4 trailer teases some major consequences for Monty's death, proving that the hit Netflix show will go out with a bang — and potentially more blood on everyone's hands.

The final season looks to be centered around the death of Monty, as his closeted lover Winston starts attending Liberty High in an attempt to investigate why Monty was framed for Bryce's murder before being killed in prison — something that Clay and the gang know all too much about.

Spoiler alert: as fans will remember from Season 3, the students successfully framed Monty for Bryce's murder to protect Alex, who actually pushed Bryce into the river, and Jessica, who witnessed the whole thing go down. Monty had already been arrested for Tyler's sexual assault, making him the perfect scapegoat, but sadly, he has an alibi in Winston, who he was secretly sleeping with on the night Bryce died. Winston's appearance combined with the fact that the guns hidden by Clay and Tony to protect Tyler in Season 2 were found in the lake, could put the Liberty High kids in huge trouble.

The trailer remains vague about what's ultimately going to happen, but it teases lots of drastic actions — from Alex and Zach breaking into school to Clay getting in another mysterious stand-off at gunpoint. Plus, the returns of Bryce and Monty are now official — in flashbacks or delusions of course. The trailer also introduces Clay's new therapist, and even he suspects that Clay's not telling him the entire truth. "I see a kid who's paying a very high price, and I don't know what yet for," he tells him. "I suspect it might be for secrets you keep."

In an interview with Entertainment Weekly, showrunner Brian Yorkey confirmed that Clay's mental health was "very central" to this season's mysteries, and teased that his way of handling it leads to conflict with his ride-or-die Tony. "There's going to be a little bit of friction between Tony and Clay in a way that I think is going to be uncomfortable for those of us who love the Clay and Tony of it all," he said. "But it's also really satisfying in the way we see the two of them work through it."

If anything, it looks like the final season will prove that two things are true in the 13 Reasons Why universe: the dead are never really dead, and secrets are never kept secret forever.

More like this
Netflix Shut Down 'Bridgerton' S3 Rumours About A “Very Dark” Storyline
By Bustle
'The Queen’s Gambit' Season 2 Tweet Wasn’t From Anya Taylor-Joy
By Mary Kate McGrath, Jack Irvin and Grace Wehniainen
'The Crown' Season 6 Has Suspended Filming "Out Of Respect" For The Queen's Death
By Bustle Staff
Bill & Frank’s 'The Last Of Us' Episode Has Twitter Emotionally Wrecked
By Alyssa Lapid
Get Even More From Bustle — Sign Up For The Newsletter
From hair trends to relationship advice, our daily newsletter has everything you need to sound like a person who’s on TikTok, even if you aren’t.