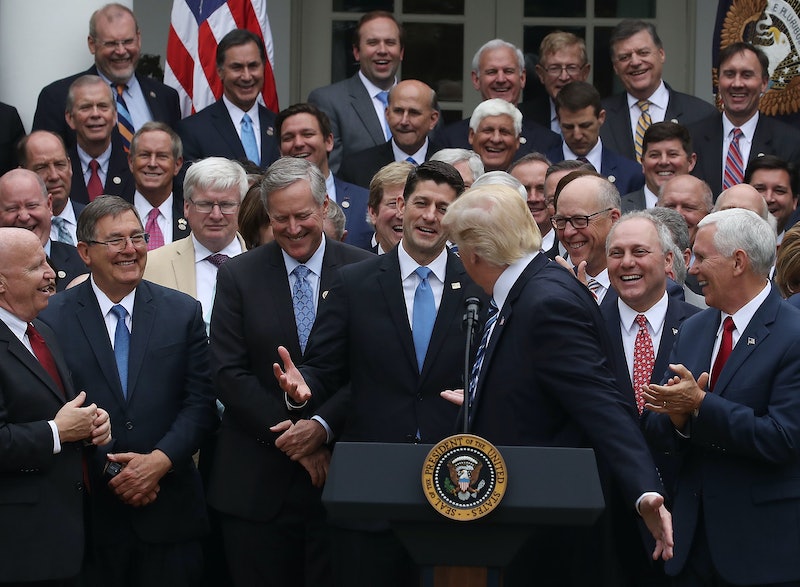 According to a report first shared by Bloomberg, the 13 senators working on the American Health Care Act (AHCA) are all men. The chamber version of the bill is supposed to contain legislative revisions in order to pass the Senate, and at this moment, there is not a single woman in the list of the senators who are working to tweak the bill.

The Senate version of the AHCA is expected to address growing concerns about the House bill. Many fear the House's version would affect the health insurance coverage of over 24 million Americans, and they are also concerned about the move to defund Planned Parenthood — a critical source of reproductive health care for millions of women and men in the United States.

If the House bill passes as is, health care experts expect that the loss of health care coverage would be primarily due to the egregious uptick in premiums, the slashing of some $880 billion from Medicaid, and the possibility of insurers denying coverage for people with "pre-existing conditions."

Among the 52 Republicans in the Senate, only five are women. Two of them are at odds with the health care bill: Susan Collins of Maine and Lisa Murkowski of Alaska. Apart from those two are Deb Fischer of Nebraska, Shelley Moore Capito of West Virginia, and Joni Ernst of Iowa.

All of the Republican women — including Collins and Murkowski, who have previously voiced disagreement with defunding Planned Parenthood — are completely absent from the 13 all-male Republican list of senators.

Although ABC News reported that Collins voiced optimism for the health care bill sitting in the Senate — claiming to treat it with a "new, fresh approach" — her absence, along with the four other female Republican senators, from the list should be a concern for everyone for a simple reason: zero women on a panel of 13 men essentially means there is no actual person with an immediate understanding of female health on that board.

Without women on that list, it is hard to believe that any male Republican on the panel meant to work on the bill is remotely aware of the vulnerability a woman faces in her life when it comes to her health. By potentially placing sexual assault survivors at risk, targeting abortion coverage, and jeopardizing birth control, the bill necessitates a gender-balanced review in order to have any chance at being fair to women.

It is even harder to believe that this list of 13 Republican men understands how potentially eliminating maternity care from health care could endanger the lives of millions of expecting mothers in America. Not only that but the bill's requisite to treat particular issues as "pre-existing conditions" disproportionately harms women.

With no woman in that sea of testosterone, it is unlikely that the Senate version of the American Health Care Act will be any different than its House edition.