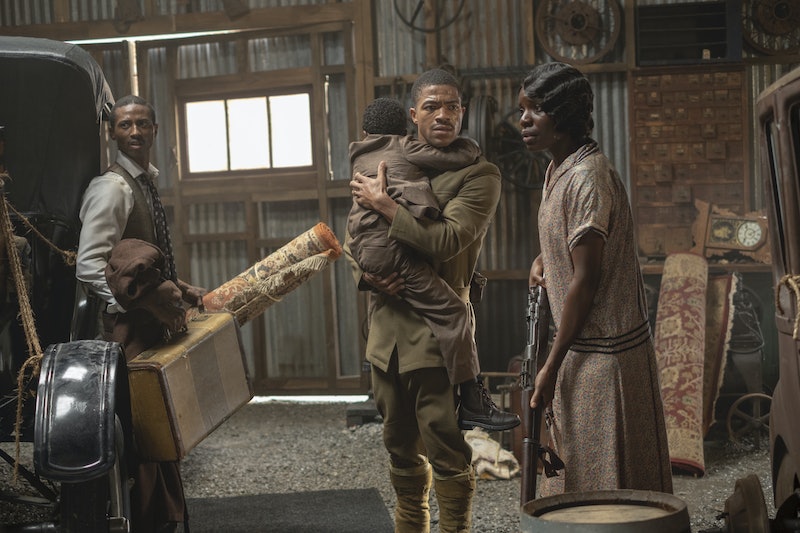 It's extremely telling that the pilot of Damon Lindelof's new superhero series doesn't begin with a scene of super-powered derring do, giant alien squids decimating Times Square, a blue-skinned godlike being — or anything futuristic or fictional at all, in fact. HBO's Watchmen opens in 1921 Tulsa and the harrowing intro sequence depicting one of the most tragic events in American history, sets the tone for what's to come.

Viewers who tune in to the adaptation of Alan Moore's and Dave Gibbon's seminal graphic novel might be shocked to learn that the events depicted in the opening sequence aren't just another facet of the Watchmen's alternate universe — in which the United States won the Vietnam War thanks to Doctor Manhattan, a superhero named the Comedian assassinated JFK, and Robert Redford has been President for 30 years. The Tulsa Race Massacre is the most terrifying part of the episode precisely because it isn't made up at all.

In 1921, the Greenwood neighborhood of Tulsa, Oklahoma was one of the most affluent black neighborhoods in the country, often referred to as "Black Wall Street" thanks to its thriving businesses and well-to-do inhabitants. But that all changed on May 31, 1921. According to History.com, riots were sparked when a young black man was accused of harassing a white elevator operator, tensions between the white citizens of Tulsa and their affluent black neighbors finally exploded and the massacre began. Overnight, Greenwood was razed to the ground.

By the morning of June 1, 35 square blocks of the city were burning; firefighters who arrived to help were threatened by white rioters and driven back. More than 1,200 homes were destroyed and over 8,000 black citizens were left homeless and destitute. Official tallies at the time would claim that 36 people had been killed in the riot. More recent estimates put the death toll closer to 300.

Why has such a tragic and large-scale incident been rendered an obscure and little-known footnote in our country's history? History.com reports that the Tulsa Race Massacre was actually targeted by a purposeful news blackout; the Tulsa Tribune removed the front page story about the riots from its archives, and police and state militia reports on the massacre mysteriously went missing. The events of May 31, 1921, were buried, never taught in schools, and remained so until well after the massacre's 50th anniversary, when scholars finally began to dig into the events of that fateful night. Finally, in 2001, the government formed the official Tulsa Race Massacre Commission to investigate and enforce the education of the tragedy.

If watching the violent sequence unfold feels harrowing from the comfort of your living room, Watchmen director and executive producer Nicole Kassell (who helmed the first two episodes of the new series), said it was just as harrowing to film. "It was essential to all of us that it not be gratuitous or sensationalized, just be as truthful and brutal and horrific as it was," Kassell tells Bustle. "We approached it very carefully in terms of being accurate." In order to achieve this verisimilitude, Kassell had her entire production team read The Burning, a historical account of the massacre published by Tim Madigan in 2013. "Every vignette you see depicted in our show is from that storytelling of historical records," Kassell says.

Before creator Damon Lindelof told Kassell about how he wanted his new show to begin, she had never heard of the Tulsa Race Massacre. Similarly, most of the cast and crew were unaware that the events they were about to reenact were based in truth. Kassell wrote a letter to everyone involved in the sequence and meticulously rehearsed it with not just the main players (as is typical) but also with all the background actors, in order to "make sure to take care of everyone both emotionally and physically." Eerily, "it happened to be that our first day of main production was the 97th anniversary of the massacre, so we brought everyone together in the beginning and had a priest bless the set to really honor the event as honestly as we could," Kassell recalls.

Kassell has achieved a lot in bringing this bold, brave show to the screen, from crafting the visual language of an alternate universe to coaxing terrific performances from the likes of Oscar winner Regina King. But the thing she's most proud of is still that opening sequence. "Pretty much every conversation I've had so far [about the show] has started with, 'I didn't know about Tulsa,'" Kassell says. "Honestly? If we didn't do anything at all except tell people that Tulsa '21 happened, I would feel proud — because I, too, was ashamed that I didn't know about it."

More like this
'Better Call Saul’s Co-Creator Explained Jimmy & Kim’s “Happy Ending” In The Finale
By Brad Witter
Netflix Reveals First Look At Wednesday In The 'Addams Family' Spinoff Series
By Bustle Editors
Who Plays Trent In 'Never Have I Ever'? Benjamin Norris Calls His Character A “Himbo Stoner”
By Grace Wehniainen and Radhika Menon
Who Is Tatiana Maslany Dating? The 'She-Hulk' Star Is Married To 'A Locke & Key' Actor
By Radhika Menon
Get Even More From Bustle — Sign Up For The Newsletter