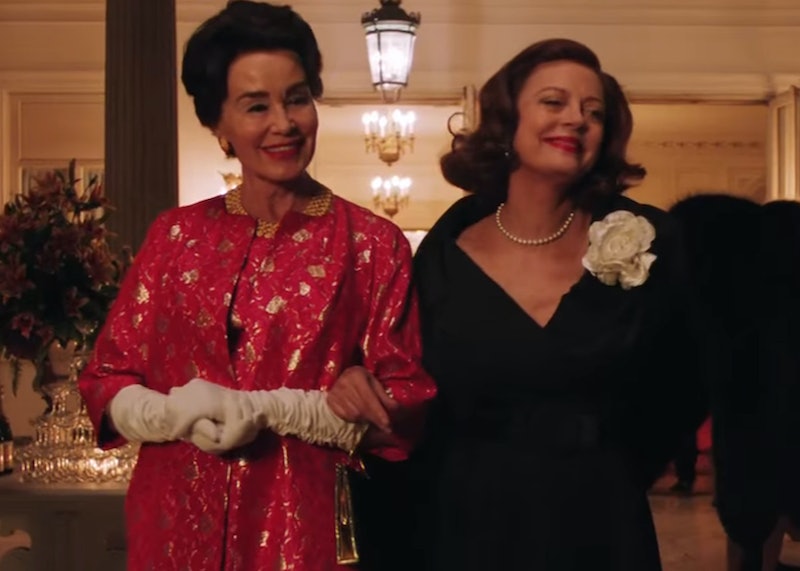 Honestly, who can take us back to an old Hollywood feud better than the brilliant mind of Ryan Murphy? He's certainly known for being able to time travel with ease in a lot of his anthology work and the age of Hollywood glamour definitely seems to agree with him. His latest series, Feud, focuses on the tumultuous relationship between superstars Joan Crawford and Bette Davis during their heyday. Of course, much of their feud was contrived by greedy studio heads who felt it was good for business and then the 1963 Best Actress Oscar also pitted Crawford and Davis against each other.

By 1962, Davis and Crawford were considered aging out of what is considered to be "leading lady status" in Hollywood. Both of them being over 50 years old was apparently a signal that, although they had a good run, we should seal them in a crypt for all eternity because what could a woman over 50 possibly have to offer to a movie? It was at this time that the thriller What Ever Happened To Baby Jane? cast the duo in co-starring roles to revive their floundering careers. Even today, this flick has achieved a cult status because regardless of personal issues, Davis and Crawford were straight up bosses who could carry a film at any age.

At the time of its release, the movie ended up being an amazing commercial success and was nominated for five Academy Awards, including a Best Actress nomination for Davis. Of course, this didn't exactly sit well with Crawford, who was considered established in Hollywood even before Davis arrived on the scene in 1930. They didn't exactly have a great relationship prior to the nomination, with issues happening during the filming of What Ever Happened To Baby Jane?

Crawford getting snubbed for the highest honor in Hollywood, finally set her off. According to People, she joined forces with gossip columnist Hedda Hopper and allegedly set out to destroy Davis' chances of winning the Academy Award. This award was extremely important to Davis for many reasons, including the possibility of getting more work and the fact that it would be a record-breaking third Oscar win for the actress. Crawford took it a step farther by telling every other actress nominated in the Best Actress category that she would happily accept their award for them, should they not be able to attend the ceremony. Well, Anne Bancroft ended up winning and not being able to attend, which enabled Crawford to accept the Academy Award that Davis lost out on and be photographed with it the entire night. Truly one of the most savage moves in Oscars history.

The 1963 Academy Awards is seen as the real breaking point between Davis and Crawford. When Crawford passed away from a heart attack in 1977, Davis commented by reportedly saying, "You should never say bad things about the dead, you should only say good… Joan Crawford is dead. Good!" Unfortunately, it seems as if the powers-that-be in Hollywood made sure to keep this rivalry going until the bitter end.