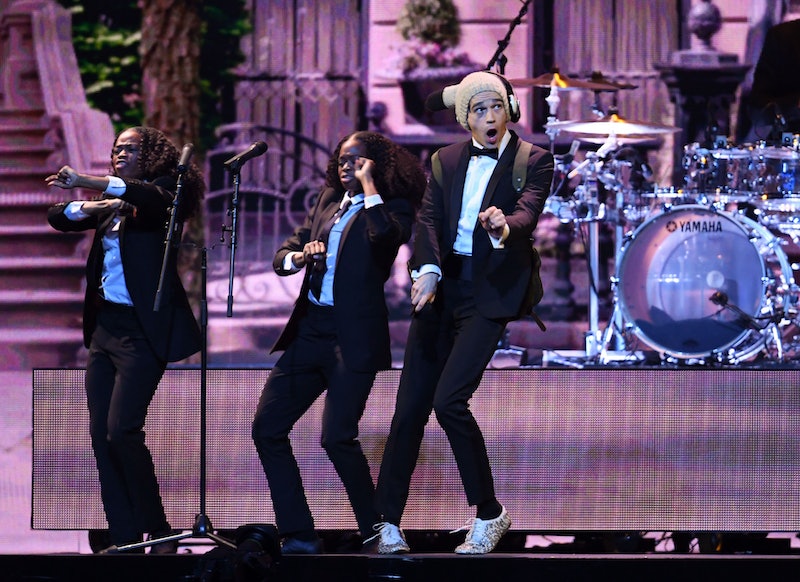 Listen to a song by The 1975 and you can't help but have a strong opinion on it. Matt Healy and co's ecclectic blend of sounds and super flamboyant stage presence aren't for everyone, but to everyone else it's ev-ery-thing. The 1975's performance at the 2019 BRITs was another cause for divisive opinions, but just to be straight with you, I'm on the side that loves them. It's been a big night for the love-them-or-hate-them band, and in my opinion, their performance was a crowning moment. Plus, when you realise that so many people hate the thing that you love, you can't help but love it even harder.

When The 1975 beat Little Mix, Gorillaz, Arctic Monkeys, and Years & Years to the title of best British group, they used the opportunity not to blow their own synthy trumpets, but to reflect on misogyny in music at large via the words of Laura Snapes, as Bustle reported.

Aside from their music, which again in my opinion, straight up slaps, the fact that The 1975 used their platform for such a prescient issues is one of the many reasons why they were worthy of taking home the award for best British group.

Even if quite a lot of Twitter doesn't agree with me, I thought that The 1975's performance of their 2018 single "Sincerity is Scary" was further evidence of the band's award worthy gravitas. It showcased Healy as a new kind of rockstar — the anti-misogynist rockstar — an antidote to the casual sexism that the genre has historically thrived off.

Unlike the shirtless rockstars of yore, Healy donned a wooly hat, similar to the one he wears in the "Sincerity is Scary" video, while a New York style backdrop also brought the audience into the world of the song. It was an electrifying performance, but to be fair, if you weren't already a fan, then the performance probably wouldn't have converted you.

The performance prompted one Twitter user to post: "Ive tried but just dont get the 1975. There are some great British bands out there but this lot, nope dont understand the hype." Plenty others felt similarly, especially Little Mix fans, who felt that their favourite group were snubbed.

One of them tweeted in response: "Not attacking the 1975, not saying it's their fault. Just salty about the BRITs not appreciating Little Mix. Don't get me wrong, I don't mind The 1975 but it's about time a girl group won 'British Group' and they still won 'British Artist Video' but that was on us soo.."

But The 1975's fans and apologists loved seeing them clean up the awards on the night. The congratulatory tweets for the band have been pouring in, including this emotional tribute from a fan: "people are so unaware of the battles matty has had to go through to get to the place he is right now. tonight was about celebrating music. the 1975 deserve all the love and sucesss they get." I couldn't agree more. I just hope that the rest of the world comes around soon too.