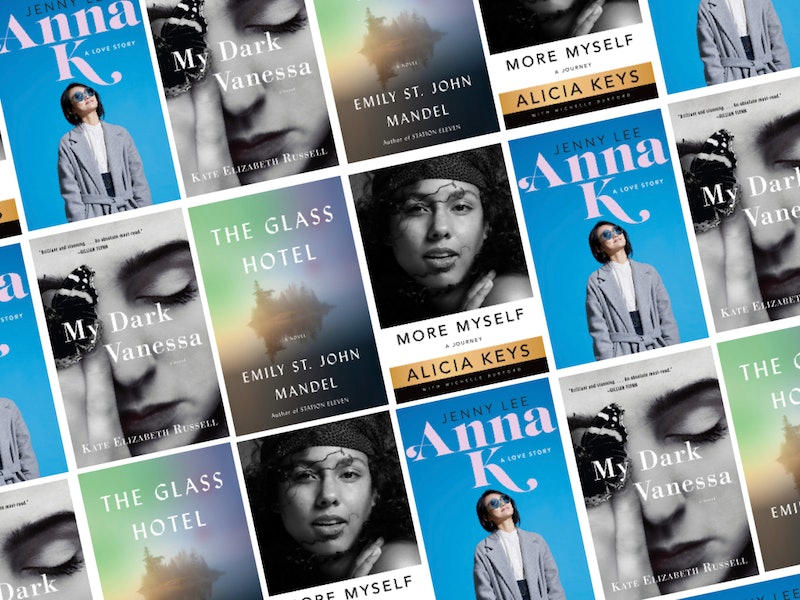 Spring is almost here. The weather is slowly starting to warm. And there's a bevy of great new books coming out this month to read as you wait for winter to thaw.

We've reached the third month in a banner books year, and this might just be the best one yet. Long-awaited novels from Louise Erdrich, Hilary Mantel, and Emily St. John Mandel are all on the docket this month, as well as some buzzy debuts from writers to watch. Just take Kate Elizabeth Russell's highly anticipated My Dark Vanessa, which follows the relationship between a 15-year-old student and her 42-year-old teacher. It's a modern Lolita story for the #MeToo era and unlike anything you've ever encountered before. Or Jenny Lee's debut YA novel, Anna K — a reimagining of Leo Tolstoy's Anna Karenina — which is already slated to be adapted as a television show on HBO Max.

Whether you're a thriller fan, a YA stan, or looking for a book to expand your mind, there's something for everyone this month. But to help you narrow things down, here are the 20 most anticipated books of March 2020:

We Ride Upon Sticks by Quan Barry (Mar. 3)

In late-1980s Danvers, Massachusetts, a high-school field hockey team descended from the major players in the Salem Witch Trials has a comeback season for the ages. But is it all the result of their earnest efforts... or are darker forces at work behind the scenes?

These Ghosts Are Family by Maisy Card (Mar. 3)

One of the year's buzziest books, Maisy Card's These Ghosts Are Family centers on Stanford Solomon, a family man holding a dark secret. Years ago, he faked his own death before stealing the real Stanford's identity. Three decades after that fateful decision, on his deathbed, he must confront the daughter he abandoned in the process.

When My Brother Was an Aztec author Natalie Diaz returns this March with Postcolonial Love Poem, a new collection of poetry. Focusing on the federal government's slights against indigenous populations, this is a timely book of poems that's not to be missed in 2020.

Based on the life of the author's grandfather, Louise Erdrich's The Night Watchmen centers on Thomas Wazhashk, the eponymous hero and a member of the Chippewa Council, who is faced with a problematic federal bill that threatens to strip away Native Americans' rights in 1953.

A retelling of Anna Karenina, Anna K. follows a 17-year-old New York City socialite whose world is upended by the entrance of a dashing young "Count" whose flirtations offer her more excitement than the humdrum of her current relationship.

Set during one fateful summer in Atlantic City, Caitlin Mullen's Please See Us centers on Clara, a psychic-for-hire who begins having visions that may be connected to a series of recent disappearances. She joins forces with Lily, a casino employee, to uncover the secrets behind her psychic flashes before it's too late.

The Mirror and the Light by Hilary Mantel (Mar. 5)

Hilary Mantel's Thomas Cromwell trilogy comes to its stunning conclusion this year. The Mirror and the Light follows Cromwell through the final four years of his life, beginning just after Anne Boleyn's execution in 1536. Mantel's hero is at the height of his power in this final act, and fans of Wolf Hall and Bring Up the Bodies won't dare to miss out on the conclusion to his story.

Recollections of My Nonexistence by Rebecca Solnit (Mar. 5)

Men Explain Things to Me author Rebecca Solnit has a new book out this March. In Recollections of My Nonexistence, Solnit discusses her young adulthood in 1980s San Francisco, examining how she came to be the writer we know and love today.

In 2017, 59-year-old Jacob Strane finds himself accused of sexual manipulation by a former student. Now 32-years-old, Vanessa Wye is approached by Strane's accuser, looking for answers. Vanessa was only 15 when she and Strane were a couple, but the accusations against him force her to confront what she thought she knew about the nature of their partnership, all those years ago.

Living with dissociative identity disorder isn't easy for Alexa, but she manages to get by with a little help from her therapist, her stepmom, and her best friend. But her BFF, Ella, may be in big trouble, and Alexa is the only one who knows what's wrong... which means she's the only one who can save her.

A family epic from Vietnamese author Nguyễn Phan Quế Mai, The Mountains Sing centers on members of the Tran family. Decades ago, Dieu Lan fled the Communist forces of northern Vietnam, setting the stage for the novel's present, when her granddaughter, Hương, must grow into herself as war with America begins to tear the country apart.

Five years ago, 18-year-old Rose Gold Watts testified in a trial that ended with her mother being sent to prison for child abuse. In the years that followed, Rose Gold's community poured out their support for her, watching as she bought her grandparents' old house and gave birth to a son. Now, Patty Watts is finally getting out of prison, and her daughter has agreed to take her in, much to everyone's surprise.

Eleanor Walsh founded THE HERD in NYC as a co-working space for women. The newest Herder is Katie, a Midwestern girl whose sister, Hana, heads up the company's PR team. Katie's working on a secret side project — a tell-all about Eleanor — but when their employer suddenly disappears on the eve of a major announcement, she and her sister find themselves caught in the center of a roiling pot of rumors.

Save Yourself by Cameron Esposito (Mar. 24)

Comedian Cameron Esposito's debut memoir, Save Yourself, is out in March 2020. Resisting the tropes that often serve only to further marginalize LGBTQ+ characters in literature, Esposito's book tells her own, unapologetically queer story, no holds barred.

The first novel in a new series from How Long 'til Black Future Month author N.K. Jemisin, The City We Became finds New York City under threat from a legendary darkness. In its time of trouble, the city spawns five avatars, one from each borough, who must work together in order to save it. But those five people are so, so different... Can they ever hope to join forces?

After separating from a husband she married too soon, a thirtysomething must rediscover herself in this new novel from The Matchmaker's List author Sonya Lalli. Anu's a newly single mom raising her daughter and trying to keep her small business — a yoga studio — afloat, but is she still doing what everyone else expects from her, instead of following her bliss?

The long-awaited follow-up to Station Eleven, Emily St. John Mandel's The Glass Hotel centers on the mostly aimless Paul and his kid sister Vincent, whose relationship waxes and wanes over the course of several years — years that include destruction and disappearances.

A 24-year-old tech writer fearing stagnation seizes upon her first opportunity to run in Alexandra Chang's debut novel. Uprooting her whole self to move to New York with her graduate-student boyfriend appears to offer Chang's narrator a way out of her dead-end journalism job, but life on a new coast forces her to reconsider both her relationship and her place in the world.

A new essay collection from the author of We Are Never Meeting in Real Life, Samantha Irby's Wow, No Thank You. finds Irby wrestling with her newfound fame. This is a book for misfits and misanthropes who continue to love life and live it to the fullest, and you'll be full of regret if you miss out on it.

More Myself: A Journey by Alicia Keys and Michelle Burford (Mar. 31)

The new memoir from "Underdog" singer Alicia Keys lands in stores this March. Covering everything from Keys' childhood in New York City to her recent work and activism, More Myself has all the details the singer-songwriter's fans want to read about.

More like this
Steve Banerjee's Wife Irene Sold The Chippendales Brand Prior To Her Death
By Brad Witter
Casey Anthony’s Father Said He Was “Ready To Forgive Her” Before She Renewed Allegations
By Brad Witter
Where Is John Leonard Now After Suing Pepsi For A Harrier Jet?
By Brad Witter
'Bridgerton' S3 Teases Exciting Social Season For Penelope Featherington
By Bustle
Get Even More From Bustle — Sign Up For The Newsletter