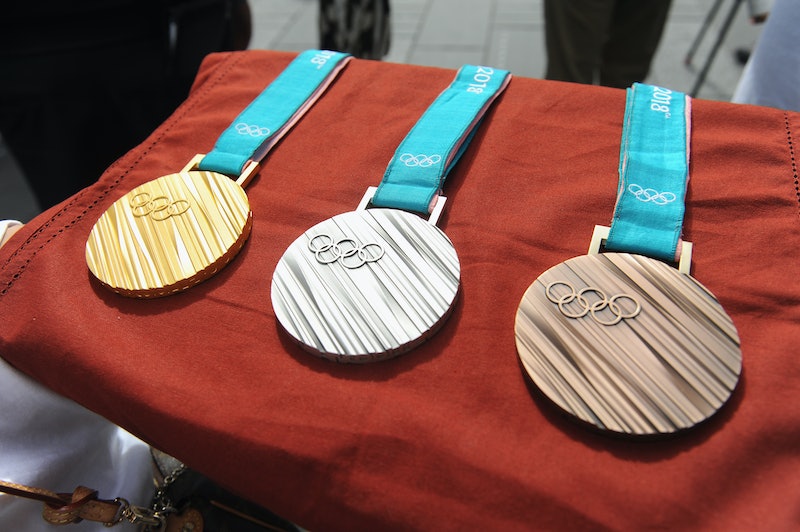 Just as each Olympic Games has its own unique setting, each of the games’ medals get their own special design. Oftentimes, the medals’ designs are inspired by the country in which the international sporting competition is taking place. The 2018 Winter Olympics medal design draws from aspects of Korean culture, featuring letters from the Korean alphabet and a design that resembles tree trunks.

Industrial designer Lee Suk-woo created the 2018 Winter Olympic Games medals, which were unveiled last September. According to the official Olympic Games website, the diagonal lines on the medals are meant to meant to resemble the texture of trees because they symbolize “the work that has gone into developing Korean culture and the games themselves.” A series of letters from the Korean alphabet, Hangeul, graces the medals, conveying themes about the effort the athletes put into the games.

Last September, Lee Hee-beom, the president of the Olympics organizing committee, told the Los Angeles Times, “The medals are a wonderful compilation of our culture, tradition and the Olympic values. We wanted the medal to be a symbol of Korea and all the wonderful memories that the athletes will take home from their time here.” Each medal features the Olympic rings on one side and the PyeongChang 2018 logo on the other, with details of the sport and event.

The ribbon affixed to each medal also showcases a piece of Korean culture — it's made from Gapsa, which is a fabric that is traditional of the region.

When speaking to reporters about being selected to design the 2018 Olympic medals, Lee Suk-Woo said, "I have worked on many projects in my career, but this is particularly special as they represent my homeland." He added that they medals were meant to celebrate the "lifetime of hard work and dedication for all the athletes who will receive and cherish them."

Although the Republic of Korea is split into two very distinct countries today, Suk-Woo's homeland has not always been divided. After the second World War, Japan ceded control of the region to the United States and what was then the Soviet Union. The U.S. occupied what is now South Korea, while the Soviets occupied North Korea, and the split remains to this day. While South Korea ultimately grew into a democracy, North Korea remains a communist regime, and both countries live under constant threat of nuclear war.

Despite this divide, North and South Koreans share aspects of the same culture, as is evidenced by the medals designed for the Olympics in PyeongChang. Hangeul, the Korean alphabet shown on the medals, dates as far back as the 15th century, and is the official language of both countries. Many other aspects of Korean culture, as symbolized by the tree trunks, transcend well beyond the border separating North and South Korea.

South Korean President Moon Jae-in has said that he hopes the Olympic Games in PyeongChang will help unite his country with North Korea. In an interview with CNN, Moon stated that he believed the games would be "a very good opportunity for inter-Korean peace and reconciliation."

After much hold-off, North Korea recently announced it would send athletes to PyeongChang, sparking hope that members of the two countries can come together, if only to compete in the Olympics. While the world has always been marked by complex geopolitical tensions and conflict, the tradition of the Olympics has always been to allow athletes to compete in the same space, despite these simmering controversies. Should South and North Korean athletes win the competitions in which they compete, they will wear home the same medals, a symbol of their shared culture.