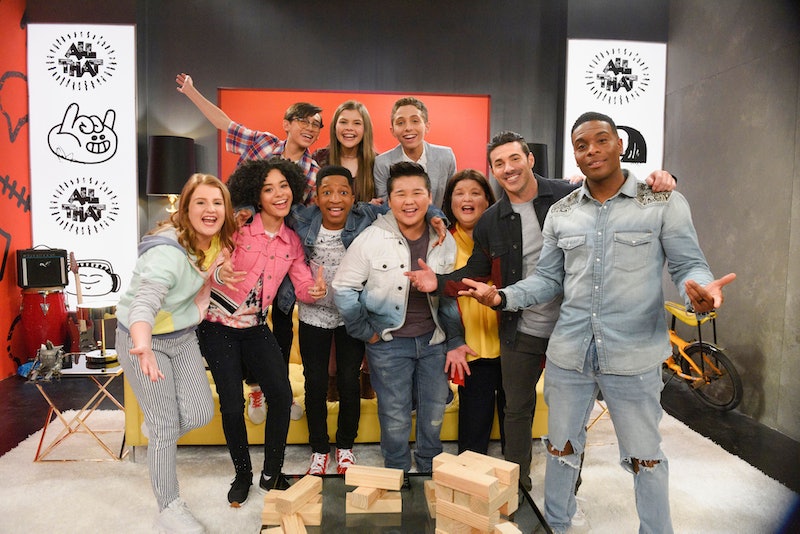 Nickelodeon's All That began as just a one-off "kid version of SNL" special but quickly grew to be the cultural touchstone for '90s kids. Created by Brian Robbins and Mike Tollin, All That aired in 1994 and ran for an astonishing 10 seasons before it was canceled in 2000. (It enjoyed a short reboot from 2002 to 2005.) The well-loved franchise spawned a number of spin-offs (Kenan & Kel, The Amanda Show, and The Nick Cannon Show) and launched the careers of current and former SNL castmates like Kenan Thompson and Taran Killam. Now an all-new rebooted season is set to premiere this Saturday, with Thompson and Kel Mitchell (of Kenan & Kel fame) executive producing the very series that kickstarted their careers. The new All That cast is funny, fresh-faced, diverse, and more than ready to speak to a whole new generation of tweens.

Thompson acknowledges how important it that All That is being revived; after it was canceled, the kid-centric sketch genre more or less died out. There hasn't really been a show since then that lets kids be unabashedly weird and creative, all while giving them the space to even perform material they wrote themselves.

“We were all creative kids with these voices in our heads that needed to come out,” Thompson told Entertainment Weekly. “So it’s a beautiful thing for a new generation to have that opportunity to spread their quirky wings. I can’t wait to see it.”

Jake Flanagin at The Atlantic calls the original All That a "weirdly subversive little show" for its time, featuring actual kids playing kids, a "Loud Librarian" sketch that lampooned the hypocrisy of adult figures, a variety of rap and R&B musical guests, and a diverse cast that was more representative of its viewership than even some adult-aimed shows are today.

In an age where adults often play teens, and their shows act as thinly veiled, glossy advertisements for products, it's important that the irreverent, kid-led sketch show is making a return. While the announcement of the show's revival faced some pushback online (with accusations of ruined childhoods and 32-year-old Drake Bell even Instagramming that "this is LITERALLY THE WORST THING I’VE SEEN"), it's important to remember that this show is for children. It's a way for kids to brainstorm ideas, speak to issues affecting them, and open up a conversation among their peers in a comedic format, much like SNL does (with varying levels of success) for adults. This revival is, quite literally, not for us, and that's fine!

According to the Nickelodeon press release, the new cast members of All That are listed below. They come from different walks of life and all sound super creative, so All That will be a great way for them to up their acting chops.

Gabrielle Green, 14, moved to Los Angeles to pursue her acting career after studying theatre at BAK Middle School of Performing Arts in West Palm Beach, Fla. Her credits include acting, voiceover work and working as a brand representative.

Born and raised in Chicago, Ryan Alessi, 14, began studying improv comedy at age eight with The Second City Improvisational Comedy Troupe. After moving to Los Angeles, he started studying with The Groundlings and developing his own characters and performing various impressions and accents.

Raised in Chicago, Chinguun Sergelen, 13, began acting at age nine. He is a Youth Ensemble member at The Second City Training Center Chicago and Laugh Out Loud Theater.

A Denver native, Reece Caddell, 12, started acting at the age of five and began performing sketch comedy when she started a YouTube channel with her two older sisters.

Kate Godfrey, 15, is an actress, singer and dancer from Scottsdale, Ariz. She began her career in her local community theater at the age of nine and was quickly accepted to the Broadway Youth Ensemble where she performed in New York City.

Originally from Sugar Land, Texas, Nathan Janak, 14, began acting at six years old. In 2016, he participated in a nine-month intensive actor training program and later moved to Los Angeles. Janak has previously been seen as a guest star in Nickelodeon’s Henry Danger.

Lex Lumpkin, 13, is an actor, singer, writer, impressionist and pianist from Indianapolis. His acting career began two years ago when he played the role of “Stuart” in the Indianapolis Repertory Theater’s production of Stuart Little.

"It's great being part of the new cast of All That," Lumpkin said to TVInsider. "The old cast, they set such a high bar and I'm super excited to try to reach that with this new group of kids. It's phenomenal working alongside them."

With Thompson and Mitchell as their mentors, there's no doubt that these kids have bright futures ahead of them.