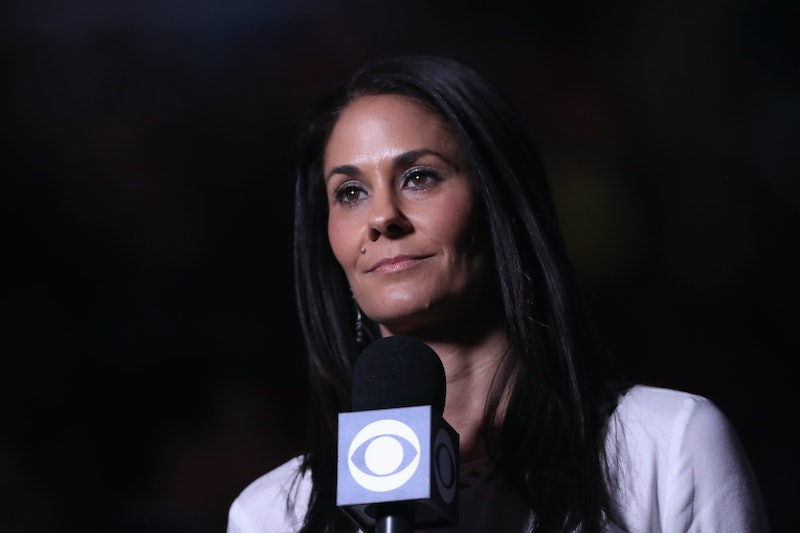 This Sunday, a team of seasoned professionals will be working to keep tens of millions of Americans up to speed during one of the most popular televised events of the year. The 2019 Super Bowl announcers are all long-time participants within the industry, albeit in different ways: there's former NFL player Tony Romo, veteran sportscaster Jim Nantz, former college lacrosse star Evan Washburn, and lead field/floor reporter Tracy Wolfson. Together, the four individuals will work to call out every play and catch every quote of Super Bowl 53.

Wolfson's role as one of the two main sideline reporters for this Super Bowl makes her the only headlining woman in an industry often dominated by men. She's been a fixture on the sideline of NFL games for several years now. In 2014, she became the first sideline reporter to work for CBS (male or female) since 2006, per USA Today; the news network had gotten rid of the role of sideline reporters altogether during those years, but since then, she's dominated the position.

Wolfson has also maintained a strong presence within her reporting throughout the 2018-19 regular NFL season. She was, notably, the reporter who elicited a now-famous quote from Tom Brady on Jan. 13, following the Patriots' win over the Los Angeles Chargers.

Brady said to Wolfson, "I know, you know, everyone thinks we suck, and you know, we can’t win any games. So, we’ll see. It’ll be fun.”

As for Washburn, the reporter and analyst for CBS has made waves for his success in such a competitive industry at the relatively young age of 31 years old. Per The Baltimore Sun, the former college lacrosse player transitioned from lacrosse reporting to football reporting in 2012, and he hasn't looked back.

When asked what his goal is as a reporter covering the biggest game of the year on Sunday, Washburn said to The Baltimore Sun,

First of all, I want to miss nothing...I think my goal is always to be able to provide context to the conversation that's happening upstairs and context to an injury that happens that I report.

As for the two men who will be commentators throughout the game (and in the pregame shows leading up to the game, itself), there's no surprise, here: Romo and Nantz have been significant fixtures in the NFL announcing game for several years now.

In terms of how Romo approached game-calling during the AFC championship, and how he plans to approach it during the Super Bowl, he said in conversation with CBS Sports, “The game is the story, and you’re just going to call it. I’m really talking out loud. There’s no real big planned thing.”

Romo and Nance have worked together as co-announcers on several games, so it makes sense that they're friends — but one lesser known aspect of their friendship is that they went to see A Star Is Born together, according to Sports Illustrated. Romo said to the publication that they'll sometimes sing the songs from the soundtrack together, along with other songs like "Red Hill Mining," by U2. Romo added, "I usually try to make Nantz hit the high note."

Here's hoping we get a taste of this musical duet come Sunday.