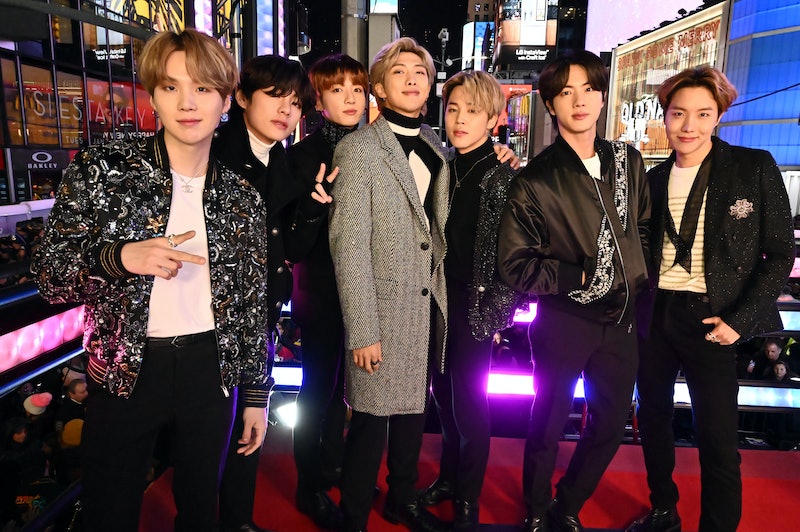 To help ring in 2020, the K-pop sensation BTS performed at Dick Clark's New Year's Rockin' Eve, where they sang both "Make It Right" and "Boy with Luv." Although RM, Jin, SUGA, j-hope, Jimin, V, and Jung Kook didn't take the Times Square stage until about 10:40 p.m., the band was trending on Twitter long before that in anticipation. Members of the ARMY, BTS's fanbase, showed up in droves to support the Korean band, both in Times Square and online.

2019 has been a landmark year for BTS — not only were they named some of the most influential people of the year by Time, but they performed on SNL — becoming the first K-pop group to do so, per Variety. And after a year of cross-over success, the musicians capped it off by taking the stage in Times Square.

One BTS fan in the New York City audience described an important band symbol on camera. "These are ARMY light sticks — they represent our fandom," the audience member said. "This specifically, just for BTS. So when we go to their concerts, they know that we're here for them."

The Associated Press did a news package on ARMY members in the NYE audience, which included a fan tearfully saying how much she appreciated BTS's message of self-love. One fan commented on Twitter, "Im sure media was expecting answers like 'i luv them cuz they're so sexy and handsome, and their tattoos etc..' instead they got a 4 pages essay on self love."

Fan account @USBTSARMY shared a message of appreciation with the band, saying, "CONGRATULATIONS BOYS!! ARMY are so unbelievably & incredibly proud to be your fans! Thank you for everything you've given us! You never cease to amaze us all! We are truly lucky to be living in the time of BTS!!"

Twitter user @ktaebwi_613 was excited that the BTS fanchant was audible on TV. "I THOUGHT ARMY WOULD BE DROWNED OUT BY THE MUSIC BUT NOPE THEY CAME TO SLAY AND CONQUER AND LOVE THE BOYS THANK YOU!!!!!" @13Be_Yourself commented on the tweet. Another said, "It straight up made me cry. Ny armys did good."

Needless to say, BTS crushed it. This isn't their first time performing on Dick Clark's New Year's Eve, either. On Dec. 31, 2018, the boy band helped ring in 2019 with a pre-recorded performance, where they sang "Mic Drop" and "DNA," per Billboard. This time around, however, BTS was able to sing live, and their ARMY of fans couldn't be happier.