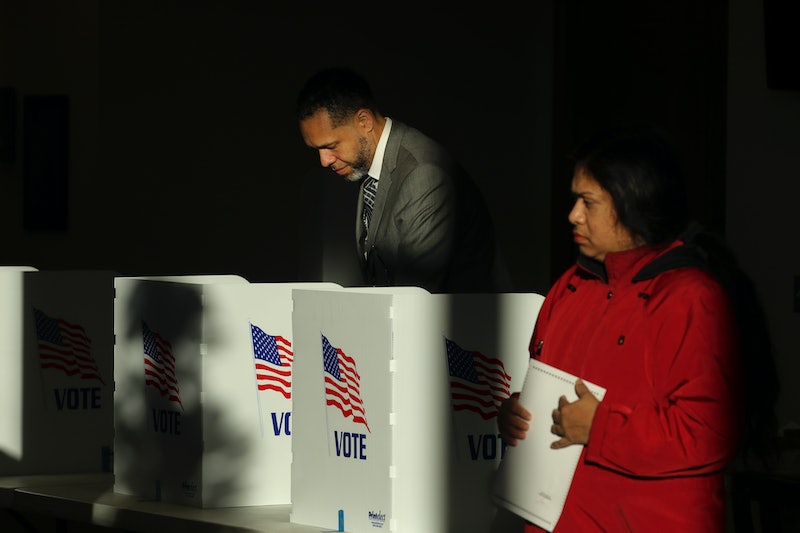 The National Popular Vote Interstate Compact, a group of states who have pledged their electoral votes to the winner of the national popular vote, is gaining momentum. Colorado became the latest state to join, and more states, like Maryland, are introducing national popular vote legislation. Although more states need to join the coalition for this new voting method to be enacted, the group is well on its way to making major changes in 2020.

Currently, most states give their allocated electoral votes to the presidential candidate who wins the popular vote in that state (with exceptions in Maine and Nebraska that allow electoral votes to be split between candidates). Some claim this system ensures that presidential candidates spend a majority of their time campaigning in swing states, according to Vox. In the 2016 presidential election, 94 percent of events took place in the 11 "battleground states" identified by Politico plus Arizona, according to National Popular Vote.

The winner of the national popular vote has lost the presidential election twice in the past five election cycles, most recently when Hillary Clinton won almost 2.9 million more votes than Donald Trump, according to CNN. This large margin in addition to the increasing prevalence of swing states could be contributing to increased support of electing a president based on the popular vote.

Groups such as the American Civil Liberties Union (ACLU), and politicians like Steve Cohen, Alexandria Ocasio-Cortez, and even Trump himself have spoken out against the current electoral college system. And many American citizens agree. A 2018 Pew Research Poll shows that 55 percent of Americans favor amending the constitution to use the popular vote in presidential elections, while only 41 percent continue to support the electoral college. However, the results are still quite partisan, with 75 percent of Democrats, but only 32 percent of Republicans, supporting the national popular vote.

If the 11 projected states join the National Popular Vote Interstate Compact, it will have a total of 261 electoral votes, nine short of the 270 necessary to enact using the popular vote. However, Georgia and Missouri have both introduced national popular vote bills recently. Although the bills have not yet passed in one of their state houses like in other projected states, if they were to pass, Georgia and Missouri's combined 26 electoral votes could push the compact over the 270 vote threshold.

But there remains the looming question of whether this pact is constitutional. Some believe that Congress would have to approve the votes since it would stray from traditional presidential election procedures. Others oppose the system saying that it is unfair to voters because they may not be accurately represented by their state government.

But for every criticism of the national popular vote, there remains support. If the National Popular Vote Interstate Compact can reach a total of 270 electoral votes, how the next president is elected could look much different.

More like this
Romance Authors Are Mobilizing For Reproductive Rights
By Natalia Perez-Gonzalez
New Coins Unveiled As King Charles III's Reign Gets Underway
By Sam Ramsden
Twitter Can’t Handle Liz Truss & Kwasi Kwarteng’s Drastic Tax Cut U-Turn
By El Hunt
Amazon's Selling A Ton Of These Cheap, Comfy Shoes That Could Easily Cost 3x More Than They Do
By Nicole Zane and Scarlett James
Get Even More From Bustle — Sign Up For The Newsletter