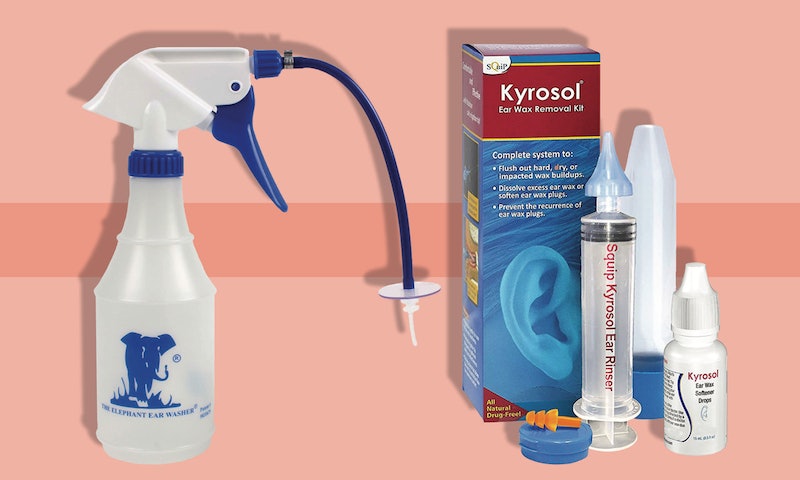 To safely remove earwax with a minimally invasive method, the best ear wax removal kits are just the ticket. Below, I’ve rounded up one water irrigator and two ear drop options that are safe and effective. So, read on to see which meets your needs.

Water irrigators harness water pressure to gently remove excess earwax. Using water irrigators can be a loud and messy process that you may need to repeat for real results, but you won't need chemical softening drops and the risk of ear damage is low. Always use as directed, and avoid use after ear surgery or recent ear injury. Water irrigators may require a helping hand from a friend or family member.

Easier to use solo, chemical softeners are liquid drops that loosen and eventually remove earwax buildup, often with a flushing syringe's aid; though drops can be purchased independently. Carbamide peroxide is a common ingredient in chemical softener kits, but more natural options, often glycerin-based, are also available. Overall, drops tend to be safe, but only when used as directed.

I’ve left medical ear curettes — metal instruments inserted into the ear canal to scrape away excess earwax — and ear candling kits out of this roundup, as neither are considered fully safe or particularly effective, according to the Mayo Clinic.

Ear canals are sensitive and easily damaged, and it’s always wise to run at-home earwax removal remedies by your doctor before use. If the problem persists after trying an at-home method, you may have to get earwax professionally removed.

Check out these highly-rated ear wax removal kits on Amazon.