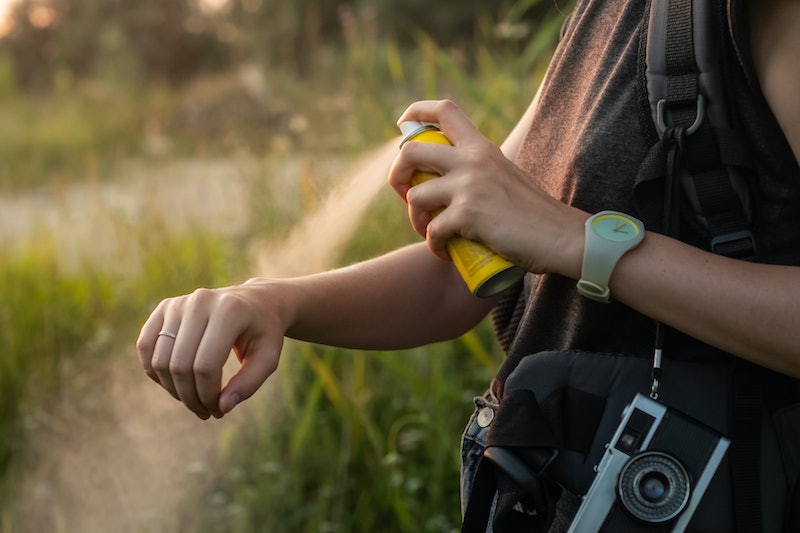 Mosquitos have always been annoying, but now that they also pose a greater health risk, thanks to things like Zika, it's important to have a trusted bug spray on hand. The best mosquito repellant sprays provide hours of protection, and let you enjoy the great outdoors without having to worry about Chikungunya virus (yes, it's a thing) or one of the many insect-born diseases that have been on the rise in recent years, according to the Centers for Disease Control (CDC).

When it comes to finding an effective bug spray, it really all does boil down to ingredients. Consumer Reports found that their top-performing bug repellents contained one of these active ingredients: DEET, Picaridin, or oil of lemon eucalyptus (OLE). Interestingly, a higher concentration of any of these active ingredient doesn't mean it works better, just that the protection lasts longer, according to the CDC. For example, a lower percentage of DEET would mean that you would simply need to apply the product more frequently than one with a higher concentration.

It's also worth noting that more DEET only promises longer protection up to a certain point. Products with more than 50 percent DEET weren't found to be markedly more effective, reported the CDC. What's more, Consumer Reports found that you could get long-lasting, reliable protection with just 25 to 30 percent DEET.

If you're using a product with Picaridin, which is a synthetic version of a natural repellent found in pepper plants, you'll get maximum protection with approximately 20 percent of the active ingredient, according to REI. Picaridin-based products are good for those with sensitive skin, because it's less likely to irritate or trigger allergies, according to the Environmental Working Group (EWG).

For those interested in a plant-based repellent, products with oil of lemon eucalyptus concentrations of 30 percent, applied topically, were found to provide protection against mosquitos for about four hours, according to a study published in 2011. And Consumer Reports found some products that contained 30 percent OLE to be effective for up to seven hours.

With that in mind, the mosquito repellants below feature the active ingredients proven to be most effective, along with the optimal concentration levels of them. Additionally, all of the products here have racked up high ratings and rave reviews on Amazon.

More like this
The 7 Best White Face Paints For Halloween In 2022
By Maria Cassano
Amazon Sneakily Put These Popular Things On Sale: Here's What You Don't Want To Miss
By BDG Commerce
How To Pack For A Move
By Marilyn La Jeunesse
The 7 Best Laptop Stands For Zoom Meetings
By Megan Gray
Get Even More From Bustle — Sign Up For The Newsletter