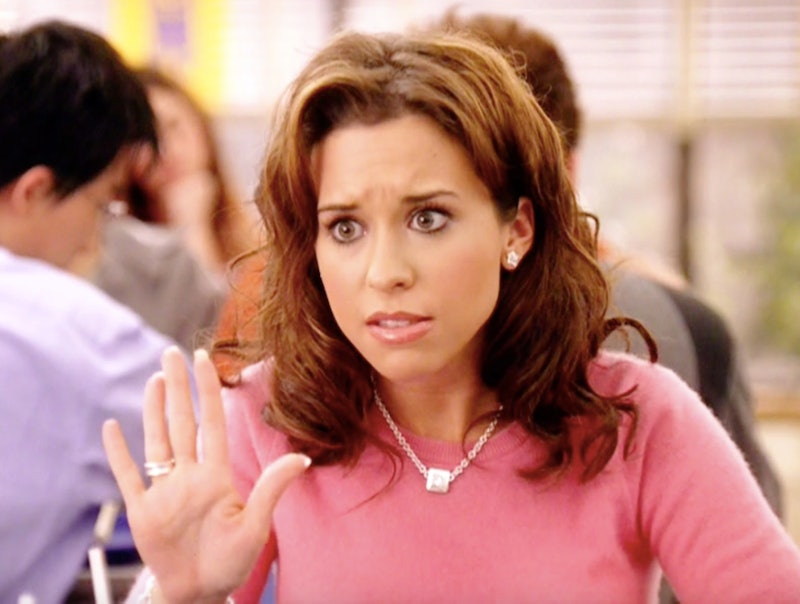 There are certain people in your life who you can talk to about anything, and then there are other people in your life who can make you feel like you're walking on eggshells when you're around them. You're not quite sure what to say when you're talking to them, because you know they have a tendency to be explosive, and no matter how much time you spend with them, you can't seem to put your finger on what their trigger is. But if you really think about it, you'll likely realize that the zodiac signs who escalate fights quickly may even easily translate to your friends who you have eggshell kind of feelings about.

Certain zodiac signs are just more likely to turn a heated conversation into a blown-out fight. And depending on your sign, you may be able to deal with it well, and engage in a healthy debate, or get totally frustrated by it.

Below are the zodiac signs that you likely fight with the most, and some tips for how to defuse the argument before it becomes astronomical. Changing the way you approach and understand your fiery friends — regardless of zodiac sign — will make all the difference in your relationship with them.

Scorpios aren't big fighters as much as they are quick escalators. When you've offended a Scorpio or triggered their defense, you'll know. Their personalities inflate and their adrenaline gets going and the conversation goes from zero to 60 before you've even had a moment to realize that you've offended them. And instead of putting up a good fight, a Scorpio is most likely going to sting you to end it. They'll say something that they believe is equally as hurtful to you, even if you didn't mean to hurt them in the first place.

If you offend a Scorpio, it's going to be in your best interest to stay calm and avoid raising your own haunches. Just back away slowly and apologize, even if you don't know what you're apologizing for.

The bull isn't a natural fighter, unless you threaten it. A Taurus isn't going to pick a fight with you, but if you get into a disagreement, get comfortable because it's going to go on for a while. The Taurus personality does not like to admit when they are wrong, and that's mostly because they rarely believe they are wrong. They're incredibly confident in their convictions and are quick to defend their actions, even if the evidence is against them.

You may not win a fight with a Taurus, so try to defuse it immediately or be prepared to give in.

The Leo personality is fierce, and just in the same way that they can be your closest friends, they can be your biggest opponents. When you're having a disagreement with a Leo that easily could be resolved or defused, the Leo personality will have trouble resisting the urge to intensify it, especially if you accidentally or intentionally trigger a vulnerable place for them. Expect explosive language, heated accusations, and a lack of boundaries when fighting with a Leo.

The more you try to defend yourself, the more they will escalate. Your best bet for extinguishing a fight with a Leo is to be apologetic. Find whatever shred of empathy you can for your Leo opponent and let the energy simmer. Try to figure out what emotional space you triggered for them the last time they exploded on you and avoid it the next time you try to have the same conversation.

Cancers might be quiet and emotionally intelligent and mature, but their feelings run deep. So be extra careful when talking to them about a sensitive subject because if you hurt their feelings, they'll hold it against you. Months or years after you fight with a Cancer they will bring up the ways in which you scorned them, even if the fight is completely resolved.

So choose your words carefully and no matter how stoic or calm your Cancer friend might seem, make sure to be incredibly gentle with your words, and think about the ways in which you might offend them before you speak.

Geminis are not fighters, but they are a gamble personality when it comes to anticipating their reactions. Depending on their mood they might respond to one conversation, two different ways. If you catch a Gemini on an day that they are connecting more with their emotional personality traits, you might really set them off and make them defensive and shut down. If you catch them on a day where they are feeling more confident, you can easily get through to them.

So, before you bring up an intense subject matter with a Gemini, prepare yourself for two different outcomes. Sure, they might embrace you with open ears and an open heart. But there's also a chance they're going to bite your head off.

Regardless of someone's zodiac sign, some people in your life are just more prone to arguing than others. If that's not your style, that's OK — it's all about figuring out the best way to communicate with them.