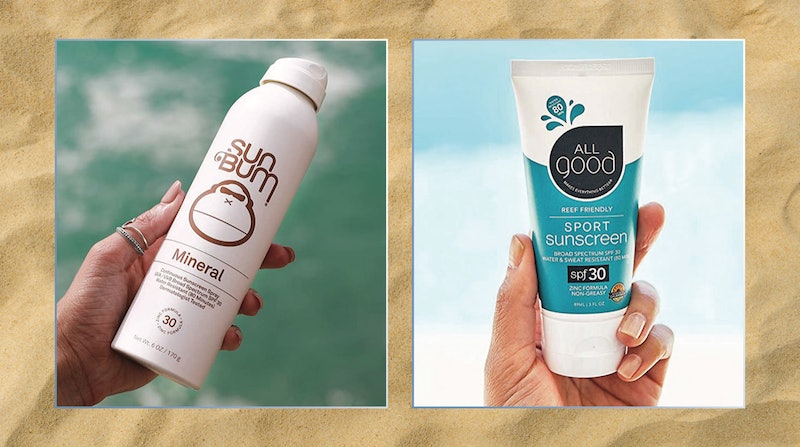 Bustle/Amazon
By Caroline Goldstein
May 30, 2020

It shouldn't be news to you that wearing sunscreen every day is really important. But what might be news to you is that certain chemicals in sunscreen contribute to the pollution that is, in large part, responsible for killing the world’s coral reefs. The best reef-safe sunscreens are free of the chemicals that are most toxic to coral reefs and other marine life, but they don’t sacrifice things like staying power, comfort, and, most importantly, ample sun protection.

In 2018, Hawaii became the first state to ban the sale of sunscreens containing oxybenzone and octinoxate, two of the most common active ingredients found in chemical sunscreens due to their ability to absorb UV rays. And research shows that they’re also the two chemicals found in sunscreen and other cosmetics that are the biggest aggressors against marine life. A 2016 study conducted by the National Oceanic and Atmospheric Administration (NOAA), for instance, found that oxybenzone can adversely affect developing coral in four major ways: It makes coral more vulnerable to bleaching; it can damage coral DNA; and it can cause abnormal skeleton growth and deformities in baby coral. (David Andrews, a senior scientist with the Environmental Working Group, told Huffington Post that octinoxate has similar effects on coral reef ecosystems, though fewer studies have been conducted on this chemical.)

These harmful additives usually find their way into marine ecosystems through swimmers wearing sunscreen that contain these substances. Another, less direct way: When you rinse off sunscreen in the shower, the chemical runoff that goes down the drain enters right into our waterways.

And there are other, less publicized substances in sunscreens that are potentially harmful to marine life, such as avobenzone, octocrylene, homosalate, octisalate, benzophenone-2, parabens, nano-titanium dioxide, and nano-zinc oxide. These chemicals occasionally even show up in sunscreens that are marketed as “reef-safe.” So here, as per usual, your best course of action is not to blindly trust cosmetics labelling but to read the ingredients list yourself.

Another, less labor-intensive route is to opt for mineral sunscreens. Rather than relying on chemicals that absorb UV rays, these “physical” sunscreens contain environmentally safe, non-nano zinc oxide, which reflects UV light before it can penetrate your skin. (But checking up on the ingredients list is still a good idea; there still may be other environmentally harmful additives hiding in there.)

Or you can just opt for one of the six reef-safe sunscreens listed ahead. They’re among the relatively few sunscreens on the market that are free not only of oxybenzone and octinoxate, but most of those other, sneaky chemicals, as well. And, just as importantly, they keep your skin feeling comfortable, not at all like a grease bomb, and protected from the sun's harmful rays.