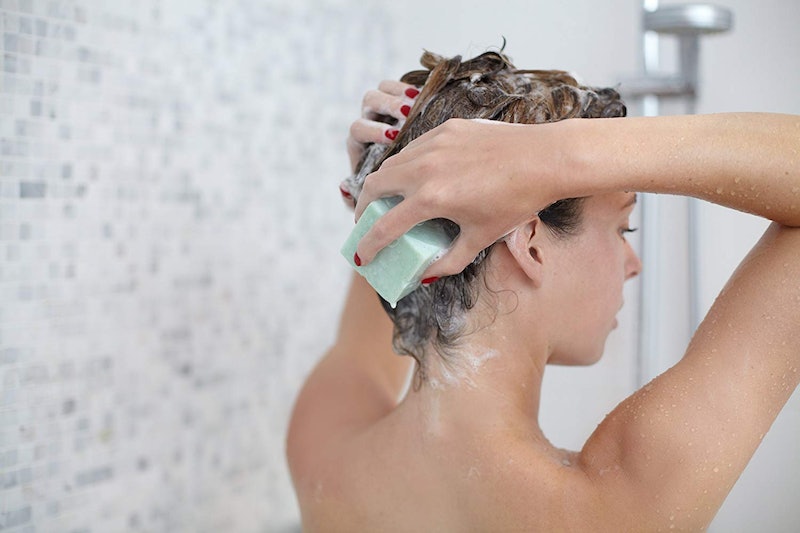 If you focus on using clean ingredients in your beauty products, you've probably considered how you can make better choices for the environment, too. After all, DoSomething.org claims that 50% of Americans aren't recycling their personal care products. Enter shampoo bars. The teeny tiny squares of soap lather just like traditional liquid shampoos, but minus any plastic packaging (or TSA restrictions). Environmental benefits aside, many of the best shampoo bars also get credit for being gentler on hair.

Similar to bottled shampoos, bar versions contain all of the same cleansing and moisturizing ingredients, but in a more concentrated formula. But don't let their mini size fool you. According to Lush, one bar lasts the equivalent of three liquid bottles.

And what exactly is in this concentrated formula? Usually shampoo bars are made of saponified oils and butters (which is just a fancy way of saying they've been turned into soap). Popular ingredients you'll find include coconut oil, sunflower oil, shea butter, and cocoa butter, which all help to moisturize hair and leave it feeling soft. But the real beauty is in the ingredients shampoo bars don't contain. In addition to reducing your plastic use, most shampoo bars are free of harsh cleansing ingredients like sulfates, because they focus on using more natural ingredients. Because of their good-for-the-environment stance, many shampoo bars are also cruelty-free and vegan.

Whether you're trying to reduce your carbon footprint or you're simply hoping to save some space in your toiletry kit, here are six of the best shampoo bars to try.

More like this
The 10 Best Wide-Leg Lounge Pants
By Andrea Gale Boerem
The 10 Best Shoes For Beach Walking, According To An Expert
By Alexa Vazquez
The Best Sunscreens To Wear Over Makeup & How To Apply Them, According To Derms
By Adeline Duff
The 4 Best Lash-Growth Mascaras
By Nina Bradley
Get Even More From Bustle — Sign Up For The Newsletter