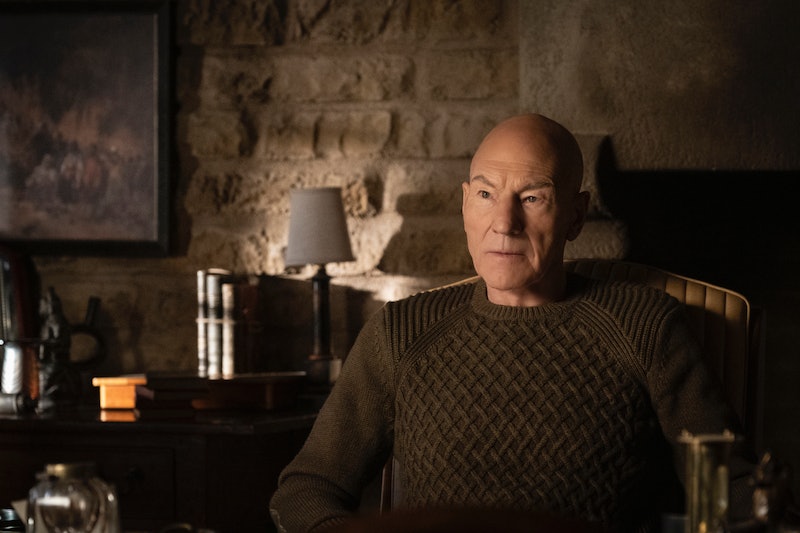 Come Thursday, Jan. 23, CBS All Access' will debut the newest addition to the Star Trek franchise, Star Trek: Picard. It's a continuation of the seven season-long Star Trek: The Next Generation — which ran from 1987 to 1994 — and follows Patrick Stewart's Jean-Luc Picard while also referencing films like Nemesis and J.J. Abrams' Star Trek reboot. Figuring out exactly where to begin in order to brush up on key characters and storytelling lore can be daunting, so here's a guide for what to watch before diving into Star Trek: Picard.

Though you could start just about anywhere with Star Trek, why not hit the ground running with one of the best and most action-packed finales? "The Best of Both Worlds" shows Picard at his most embattled: he's captured by the Borg and assimilated into their army, leaving his crew to decide to destroy Picard and his Borg ship or risk them striking Earth. Picard is ultimately rescued, but the torture he endured takes a heavy personal toll on him, and impacts all his interactions with the Borg going forward.

"Family" The Next Generation Season 4, Episode 2

A focused character piece, "Family" shows Federation-era Earth and the family Picard left — some who greet him warmly and some, like his brother Robert, who could not care less about Picard's illustrious career as a Starfleet captain. This episode picks up right after "The Best of Both Worlds," and follows Picard navigating strained family relations while also recovering from his Borg-related PTSD. Notably, he recuperates at his brother's vineyard, which is where the new series begins.

The movie Star Trek: Generations later reveals that Picard's brother and nephew died in a fire, so by the start of Picard, Jean-Luc is all that's left of their family — a thought that will undoubtedly be on his mind as he lives quietly at the vineyard.

“The Measure of a Man” The Next Generation Season 2, Episode 9

Judging by the Picard trailer, the return of the android Data will serve as a major emotional twist in Picard. Data died in the film Star Trek: Nemesis, which seems to weigh heavy on Picard even now.

"The Measure of a Man" is a key Data episode, as his personhood is put into question by the Federation. It's an episode that illustrates Picard's deep dedication to social justice and empathy, as he rises to Data's defense and delivers some truly powerful speeches.

“I, Borg” The Next Generation Season 5, Episode 23

"I, Borg" exists as another Picard character study, as his beliefs and compassion are challenged when he meets Hugh, a Borg who has some level of individuality. When Picard is faced with a difficult decision to kill Hugh and end the Borg threat or not, he chooses to let Hugh live. Not only is this demonstration of compassion remarkable in the wake of his torture in "The Best of Both Worlds," this episode proves that Picard is someone who constantly strives to be the best that humanity has to offer.

“The Inner Light" The Next Generation Season 5, Episode 25

"The Inner Light" is a pensive and moving episode, as Picard lives an entire lifetime on a long-dead world while in a dream. We learn the people of Kataan sent a probe out 1000 years ago, hoping that someone would find the probe and learn about them following their planet's destruction. Picard carries the memories of this lost civilization with him, which further shapes him into the thoughtful and empathetic captain he is.

Seven of Nine, who was liberated from the Borg by Captain Janeway in Star Trek: Voyager, is featured in the trailer for Picard. "The Raven" is a good introduction to her character, as it follows Seven as she learns how to be human again. In the episode, Janeway and the crew miraculously come across the ship the Raven, which Seven and her family lived on before she was taken.

While you can probably do without seeing Next Generation's pilot episode, watching the finale of the series is pretty key, as it bridges directly to Picard. As the show's farewell, it involves time travel, revisiting Picard's relationship with his crew and exploring how he goes about solving problems — all things that will undoubtedly be important in Picard.

More like this
This 'Black Panther' Character Is Starring In Her Own Marvel Show Next Year
By Grace Wehniainen
'Wakanda Forever' Is Already Opening Doors For Mabel Cadena
By Grace Wehniainen
How To Stream 'Black Panther: Wakanda Forever'
By Chloe Foussianes
How The Thanksgiving Episode Of 'Gossip Girl' Changed Pop Culture History
By Gabrielle Bondi
Get Even More From Bustle — Sign Up For The Newsletter