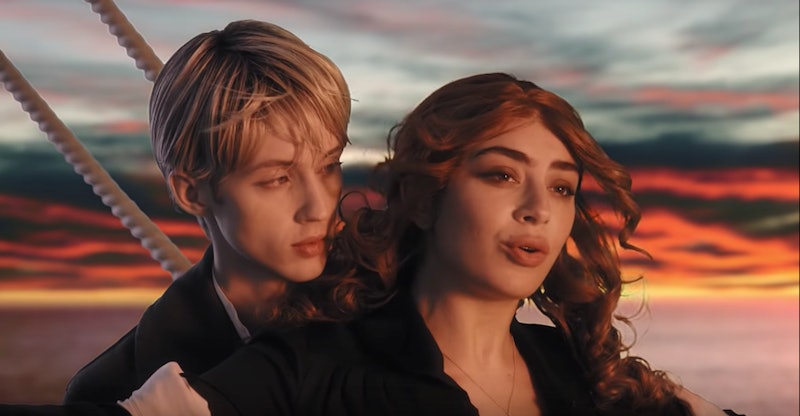 On Thursday, Oct. 11, Charli XCX dropped the video for her newest single and it couldn't have more of a nostalgic feel for fans of the '90s. The epic video for Charli XCX's "1999" features references to some of the most iconic moments of the era — and it's surely something that you're going to need to watch over and over again to catch every single '90s reference.

The project, which was directed by Ryan Staake, stars Charli XCX alongside collaborator Troye Sivan as the two reenact many unforgettable moments from '90s music videos, movies, and dress up as famous figures of the beloved decade. In one set up, Sivan is the Jack to Charli XCX's Rose from Titanic — they also recreate iconic '90s movies like the Matrix, American Beauty, and The Blair Witch Project. And it's not just movies they recreate. The video also tackles some of the decade's most iconic pop-culture moments, like when Rose McGowan and Marilyn Manson attended the 1998 MTV Video Music Awards. At one point, Charli and Troye even morphe into characters from every '90s kid's favorite computer game, The Sims. The video also pays homage to many products of the '90s including; Hanes, old school cell phones, water-proof watches, Bubbalicious gum, Beanie Babies, Nickelodeon, eBay, Netscape and AOL, according to NPR.

But perhaps the best '90s references in "1999" are the music video recreations. The video puts Charli XCX and Sivan into iconic '90s music videos from TLC, The Spice Girls, Eminem, The Backstreet Boys, and Justin Timberlake, to name a few.

In mid September, XCX dropped a hint about the video, asking her Twitter followers, "tell me ur fav 90s movies of all time." However, the tweet only revealed that she was "doing some research for a thing" and gave no indication of what she had in store. Shortly thereafter, the 26-year-old British singer began sharing quotes from American Beauty as well as lyrics from Eminem's 1999 hit, "My Name Is," both of which are referenced in the video.

The release of "1999" was officially announced on Oct. 1, with both Charli XCX and Sivan tweeting out the single's artwork which featured them dressed as Trinity and Neo from The Matrix.

The song itself mentions a ton of iconic '90s memorabilia. "Yeah, I just wanna go back / Nike Airs, All That / CD, old Mercedes / Drive 'round listening to Shady," Charli XCX sings.

Meanwhile, Sivan has his own throwback moment on the track, crooning:

The chorus even gives a shout out to Britney Spears' debut single, with a line that shares: "I just wanna go back, sing "Hit me baby, one more time"

On Tuesday, Oct. 9, the pair took the stage to do their first-ever live performance of the song during Sivan's concert at Radio City Music in New York City. Afterwards, Billboard quoted Sivan as saying that Charli XCX was one his “pop icons.” He added, “She is the most creative and she is literally a f*cking tastemaker. She’s at the forefront, you know what I mean?”

Well, if there was an award for most '90s referenced crammed into three-minute video, Charli XCX's "1999" music video would certainly have it in the bag.