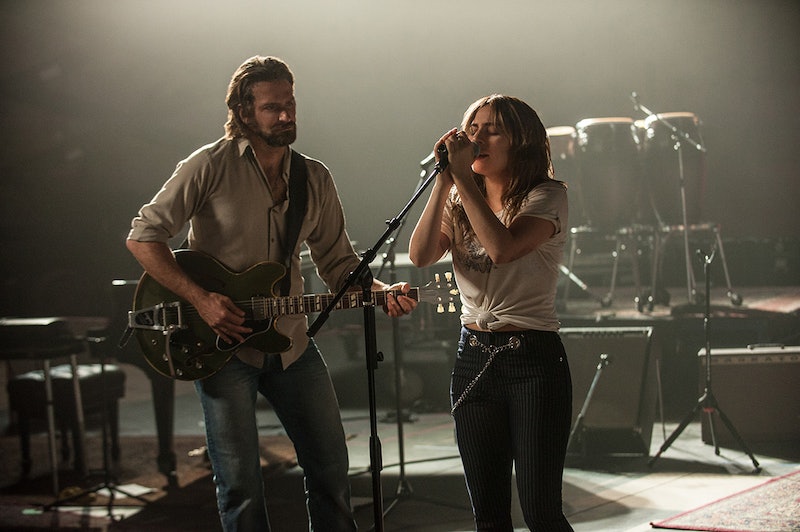 Are you happy in this modern world, or do you need more of A Star Is Born? According to The Hollywood Reporter, after the film's success at the Oscars, A Star Is Born will be rereleased in theaters with brand new songs and 12 more precious minutes of footage.

Though the "encore" edition of the movie will only be in theaters for a week, as per the Warner Bros' official announcement via THR, fans will be treated to brand new song sequences cut from the film entirely as well as extended cuts of musical numbers that were trimmed down in the original run. But, most notably, the film will include a brand new song, "Clover," sung by Jackson (Bradley Cooper) and Ally (Lady Gaga). A clip released via The Hollywood Reporter to celebrate A Star Is Born's rerelease shows Jackson and Ally sitting on an empty stage writing "Clover." Fans of the film will undoubtedly recognize the scene from a brief shot in the movie's trailer.

In addition to a brand new song (that isn't even on the film's original soundtrack), this new cut of A Star Is Born will also include even more footage of Lady Gaga's a capella version of the Oscar-winning single "Shallow," which her character, Ally, sings to Jackson (Bradley Cooper) in the parking lot. More songs getting extended sequences include Jackson's songs "Black Eyes" and "Alibi." And, as an exciting treat for fans who haven't stopped playing the film's soundtrack, the new release will actually show Ally singing "Is That Alright?" to Jackson during their wedding, as well as the rocker recording "Too Far Gone" in his studio.

Though the film only ended up winning one award at the 2019 Oscar ceremony, it's clear that A Star Is Born has meant a lot to both the film's cast and its fans. On Valentine's Day, Gaga unveiled a tattoo that she got in tribute to the film, which took up the entirety of her spine. "Happy Valentine's Day. A tattoo toast to 'la vie en rose' by the beautiful @winterstone my spinal cord is now a rose," Gaga captioned an Instagram photo showcasing the tattoo.

The ink is in honor of the performance of Edith Piaf's classic number, which Ally performs at the top of the film, earning Jackson's attention. According to E! News, Cooper actually saw Gaga performing "La Vie En Rose" back in 2016, and it inspired him to cast the singer alongside himself in the film.

In addition to "La Vie En Rose," Gaga has also spoken about how important the song "Shallow" has been to her over the course of awards season. After she and co-writers Mark Ronson and Alex Rossomando won the "Best Original Song" Oscar, the singer spoke about the inspiration behind the song in the press room backstage at the ceremony.

"In this song we provide not just a conversation, but also a very poignant statement. I wish not to be in the shallow, but I am. I wish to dive off the deep end, but watch me do it," Gaga explained to reporters. "I think this is something that speaks to many people, and during, I think, a very shallow time, it's a chance for us all to grab hands and dive into the water together and swim into the deepest depths of the water that we can."

Will fans find just as much meaning and resonance in the new performances that the "encore" release of A Star Is Born features? We'll just have to see the movie once — or twice — more to find out for sure.