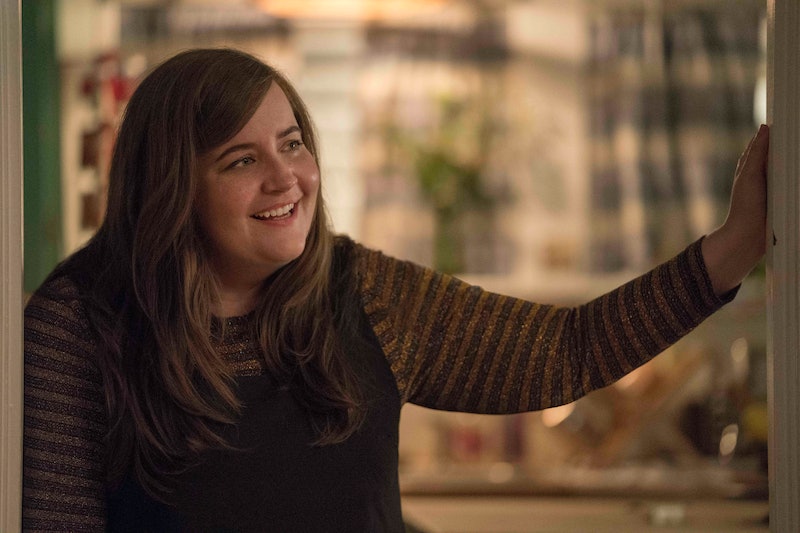 Twenty minutes into the first episode of Hulu's Shrill, Annie (Aidy Bryant) heads into a clinic to have an abortion. She's been blindsided by the fact that the morning after pill isn't effective for plus-size women, and she knows she can't raise a child with the immature fling who makes her sneak out the backdoor after having sex so his friends won't see her. So after quickly weighing her options, she's arrived here. The abortion scene in Shrill could have gone down in many ways, but instead, the procedure and its aftermath broke the mold that far too many movies and TV shows have followed.

Annie heads into the exam room with her best friend Fran, who's there to hold her hand throughout the procedure. She lays on her back on the exam table, while a doctor begins the process and calmly explains each step as it happens. A close-up on Annie's face shows discomfort and maybe some nerves, but before you know it, it's all over — she and Fran are lounging cozily in bed together shortly after, relaxed.

The fact that the abortion itself is complication-free is its own breath of fresh air. According to the research organization Advancing New Standards in Reproductive Health, abortions are often shown as being much more dangerous in movies and TV than they are in real life. According to their statistics, 9 percent of fictional women die directly as the result of an abortion, whereas the real risk of death from abortion is essentially nonexistent.

It's even more refreshing that the direct aftermath of Annie's abortion is peaceful, full of love and comfort, and not riddled with some kind of adjacent tragedy. According to the same ANSIRH report, 15.6 percent of women in TV and movies die after having an abortion, whether due to complications that arise later, or things like murder, suicide or self-harm. Shrill doesn't allow Annie's story to be entangled with any such catastrophe — she's able to move on with her life, and even her day, smoothly, which is exactly the case for countless real-life women.

Annie's overall attitude toward the abortion is another way Shrill deviates from the norm of TV. She doesn't trivialize it or handle it without careful thought, but she also doesn't think of it as a devastating tragedy. She's not distraught or ashamed, there's no mournful or foreboding music playing while the procedure happens, and she isn't worse off when all is said and done.

If Annie had gone through the experience feeling more sadness, more pain, more confusion, that would have been OK — different women react to abortions and unplanned pregnancies in different ways, and there's no wrong or right way to feel. But the way Annie moves on seemingly immediately at peace with her decision shows a kind of matter-of-fact attitude that TV audiences rarely see women have about their reproductive health. Abortion is often a part of life, and for many, it's not a traumatic one. Shrill does not ever risk becoming a show about a woman coping with an abortion as though it's some kind of personal failure.

In fact, in what feels like an especially daring twist to put on mainstream television, Annie feels better about herself after her abortion. She actually tells Fran a few days later, "I feel really, really good." Annie says she feels like she's taken back some aspect of ownership over her fate and her body that she hasn't felt in a long time. "I got myself into this huge f*cking mess, but I made a decision, only for me, for myself, and I got myself out of it. I don't know, I feel very f*cking powerful right now."

That newfound feeling of freedom and agency following an abortion is something that hasn't really been featured in mainstream pop culture, and it feels like a meaningful perspective to explore. In the days following the procedure, Annie uses that liberation to finally stand up to the hook-up who treats her poorly, and demand to be taken more seriously by her boss at work, showing that she really has started down a path of exerting more control over her circumstances.

Shrill is based on a non-fiction book of the same name by Lindy West, who developed the TV adaptation with Bryant, so it's no surprise that Annie's journey through this feels uniquely authentic. Viewers feel for Annie, root for her, and empathize with her — but she's never someone they feel like they need to pity, even in her more difficult moments. The events of Shrill's pilot perfectly set the series and its protagonist up for a story that plays by no one's rules but its own, and it's truly exhilarating to watch.