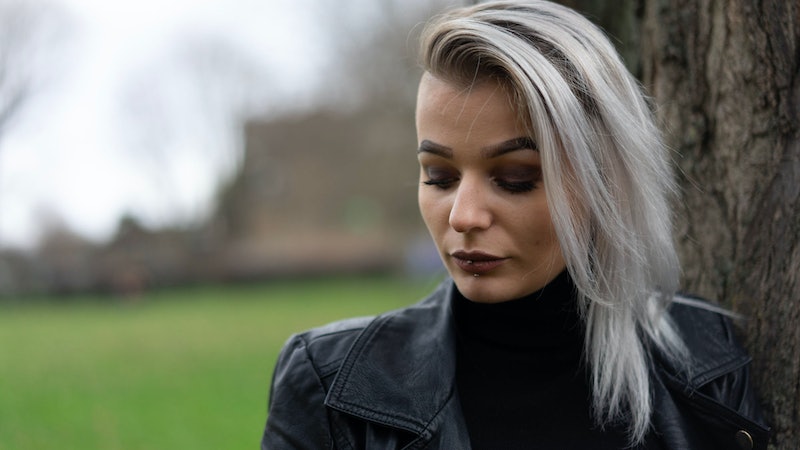 Despite horrifying statistics, the reality of domestic abuse is often hidden from the world. In some cases, victims' own friends and families are unaware of the truth. But a new Channel 5 documentary aims to educate the public and encourage those suffering from domestic abuse to come forward. So what is The Abused about?

The feature-length programme focuses on the lives of two women: 25-year-old Kelly and 45-year-old Hazel. Both suffered at the hands of their partners on numerous occasions before eventually reporting the abuse to the police. The Abused combines real police footage, 999 calls, and interviews with the two women, resulting in a realistic depiction of living with domestic abuse and the criminal process that follows after reporting a perpetrator.

Kelly's experience is particularly harrowing. As Refinery29 reports, her husband Kieron began to exhibit controlling and violent behaviour. And even when the police came to their home, Kelly was too afraid to admit that any abuse had occurred. This went on for some time.

In 2016, the couple had a son, states The Sun. Keiron had been in and out of prison during the relationship for unrelated crimes and shortly after the baby's birth, he was sentenced once again. While inside, Kelly found out that he had cheated on her and proceeded to end the marriage. But on Keiron's release in November 2017, the couple ended up living together once again.

"Within the first two weeks, he’d attacked me three times," Kelly told The Sun, adding that Keiron threatened to kill her. "He’d laugh. That was the worst thing. He laughed about how scared he made me. They break you until you’re nothing." Eventually, Kelly called the police. Even after being arrested, Keiron continued to harass her. In May 2018, The Sun reports he pleaded guilty to control and coercion and two assaults and was sentenced to 18 months in prison.

Kelly told Refinery29 that she wants the documentary to show other domestic abuse victims that they too can come forward. However, she did admit that "it needs more awareness. It's kind of taboo. People just don't go to the police."

Hazel's story follows a similar pattern. As The Sun reports, her partner began to physically abuse her but she tried to ignore the signs. It wasn't until he punched her and stamped on her head that she called the police and began a course of legal action against him.

The statistics surrounding domestic abuse are difficult to come to terms with. The 2016 Home Office Homicide Index revealed that two women in England and Wales are killed every single week by a current or former partner. And an estimated two million adults experienced domestic abuse between March 2017 and March 2018, states the Crime Survey for England and Wales.

Domestic abuse convictions are thankfully rising. The same survey found that 76 percent of prosecutions in the year ending March 2018 resulted in a conviction; the highest percentage since 2010. With documentaries like The Abused, hopefully more people will feel brave enough to speak to the police.

As the programme shows, the road to securing a conviction isn't easy. Police admit that evidence is difficult to come by as it's often just one person's word against another's, reports Refinery29. But Kelly wants people to know that they have options. "Leave, in any way you can," she told The Sun. “If you can’t then message someone, let them know what’s going on. There are ways out."

The Abused airs on Feb. 20 on Channel 5 at 9 p.m. If you are affected by any of the topics discussed, contact the National Domestic Violence Helpline.

More like this
The Bestselling Novel 'The Doll Factory' Will Be Adapted Into Thrilling TV Series
By Catharina Cheung
'The Timewasters' Creator Is Back With A New Boarding School Dramedy
By Darshita Goyal
WAGatha Christie The Series Is Officially... Coming To TV
By Maxine Harrison
An 'X Factor' Legend Has Joined The 'Strictly' 2022 Line-Up
By El Hunt and Sam Ramsden
Get The Very Best Of Bustle/UK