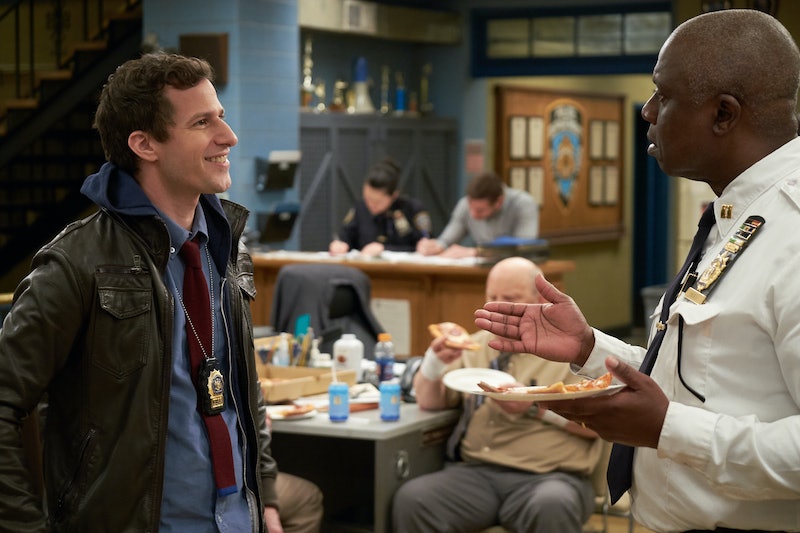 Spoilers for the May 6 episode. Brooklyn Nine-Nine makes working at a police precinct look fun, what with all the fire-extinguisher races and elaborate Halloween heist celebrations. However, the Brooklyn Nine-Nine Season 5 episode "Show Me Going" goes where the series hasn't gone before, by allowing the realities of the job to endanger one the gang. While being a cop at the Nine-Nine may sometimes look like it's about pranks and hanging out with your friends, this storyline highlights the risks these law enforcement officers take daily.

When Rosa answers an active shooter alert, she ends up being out of the office for an extended period of time without any way to contact the Nine-Nine. While the precinct is trying to keep tabs on the situation through police scanners, they're unable to discern whether or not Rosa will be able to make it out of the situation unharmed. As they wait for Rosa's return, they're forced to confront something that isn't often mentioned on Brooklyn Nine-Nine – the possibility that one of their own might not come back. Or, if Rosa survives the situation, that she may find herself gravely injured and no longer able to perform her duties as an detective. Adding to the suspense of the episode, the show never shows the audience what's going on with Rosa at the shootout, leaving the viewers just as uninformed about her well-being as the Nine-Nine. However, through that fear, the detectives learn a lot about how they deal with feeling helpless.

While Rosa does return unharmed by the end of the episode, preventing the episode and the series from getting unbearably sad, it's sobering to see the characters of Brooklyn Nine-Nine being forced to confront their own mortality shows. Jake starts trying to find a way to get down Rosa despite orders to stay put, Terry starts reexamining his life insurance policy while wondering how to deal with the fact that "every day I leave for work I might not come home," and Amy takes all of her anger with the world out on Rosa's broken toilet. It's still a hilarious episode, as any B99 fan would expect, but there's a tinge of sadness running throughout it.

Of course, even one of Brooklyn Nine-Nine's most poignant episodes still has room for a "penis-punch sixty-nine" during a scheme to get Holt to allow Jake to take a gun out of the armory to go assist Rosa. However, on his way out, Holt offers some sage words for the emotionally wrought Jake. "This isn't a movie. You're not going to rush into the scene and single-handedly take out all of the bad guys ... You wanna be a hero? You wanna actually get something done? Your friends and colleagues right here are struggling and they need you ... They need someone to help them face their fears and deal with the reality of the situation." Jake takes off towards Rosa — but comes back shortly after with pizza for the office.

Upon returning to the office, Jake begins doing the kind of police work that doesn't often make it into movies — talking to others about how they are feeling. Before Rosa's return, Jake, Terry, and Charles all share a resigned sigh after expressing their fear that they could lose someone they care about or no longer be there personally for the people in their lives whom they love. It's a somber moral for a show that is often about catching bad guys and being a good friend. But this episode suggests that an important part of the role of a true friend is being there to talk about the scary things that seem unbearable to even think about. At the very least, this Brooklyn Nine-Nine storyline proves that there is no situation so dire that a few slices of pizza with friends can't make it a little bit more bearable.