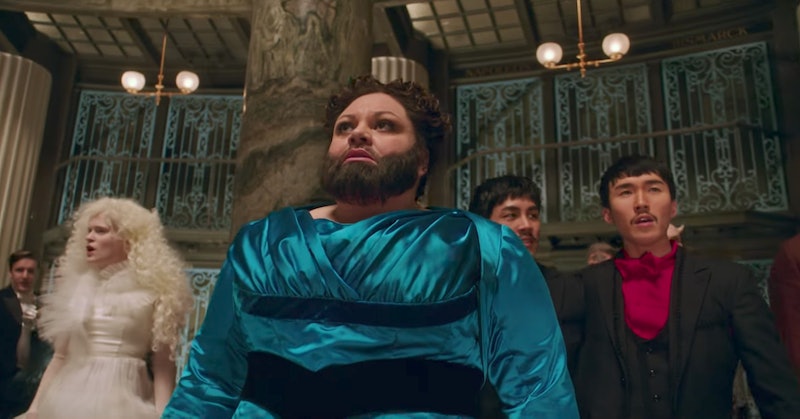 The Greatest Showman, which hits theaters on Dec. 20, follows the story of real-life circus owner, P.T. Barnum in his quest to entertain people with things they've never seen before. One of the circus's performers, Lettie Lutz, is a bearded woman with an incredible voice, and the person who plays the bearded lady in The Greatest Showman, Hawaiian actor and singer Keala Settle, is a serious talent to watch. Settle might be a newcomer to Hollywood, but she fits right in among the movie's mega-stars like Hugh Jackman, Michelle Williams, Zac Efron, and Zendaya.

While The Greatest Showman is mostly about Barnum (Jackman) and his dream to create an exciting entertainment company, Settle's character actually provides one of the most inspiring performances of the movie. After P.T. Barnum finds Lettie Lutz working at a laundry service, he convinces her to join his circus, which she does. The members of Barnum's circus show include people with physical differences, like Lutz with her beard. Settle prepared for her role by learning about real-life conditions that cause women to grow facial hair, as she told Allure.

"I did a ton of research into polycystic ovary syndrome (PCOS), an endocrine disease in females that can include overproduction of testosterone. It can lead to weight gain, acne, and in some extreme cases, prominent facial and chest hair," Settle said. The actor in the film looks nothing like her character in The Greatest Showman, but in her research into PCOS, she ended up gaining insights about her own insecurities, as she told Allure.

This Is Keala Settle As Letti Lutz In The Movie:

She both looks and sounds amazing throughout the film, and Lutz sings one of the most inspiring songs from the soundtrack, "This Is Me."

And This Is What The Singer/Actor Looks Like In Real Life:

In her Allure profile, Settle revealed that she gained inspiration for her character in The Greatest Showman from activist Harnaam Kaur, who uses social media to raise awareness about PCOS while offering body positive inspiration. In discussing Kaur, Settle explains how she related to both the activist and her character. "Through [Kaur's] courage to speak of her own struggle, I learned so much about my own insecurities. I mean, logistically speaking, they’re nothing like that. But relatively speaking, they’re exactly like that," Settle said.

Settle had her own struggles with insecurity and body-positivity, but she has a lot of inspiring words to share, much like her character in The Greatest Showman. On her Instagram, Settle shares behind the scenes pictures from the film's set, including a video of the makeup team creating a cast of her head so they could create Lettie's beard. She uses the hashtag #thisisme to promote positivity and self-acceptance as well, captioning one photo, "I WIIIISH I could hear them ALLL! Keep dancing to it, keep covering it, keep lip syncing FOR UR LYFE to it, KEEP SHARING IT! Not just with me, but with the world! You are ALL the brightest lights in this universe!!!"

Settle's part in The Greatest Showman is certainly one of the most memorable from the cast of colorful and unique characters. The actor's powerful voice will blow you away as she sings the lyrics to "This Is Me," about not wanting to hide from the world. Settle seems to have lived her life by those words, as she has appeared on Broadway multiple times in major shows like Waitress and Les Misérables.

Hopefully the world will be seeing a lot more of both Settle and characters like Lettie Lutz, who proudly share their differences with the world. Because of people like Settle and her inspiration, Harnaam Kaur, women can hopefully become inspired to embrace their most unique features.