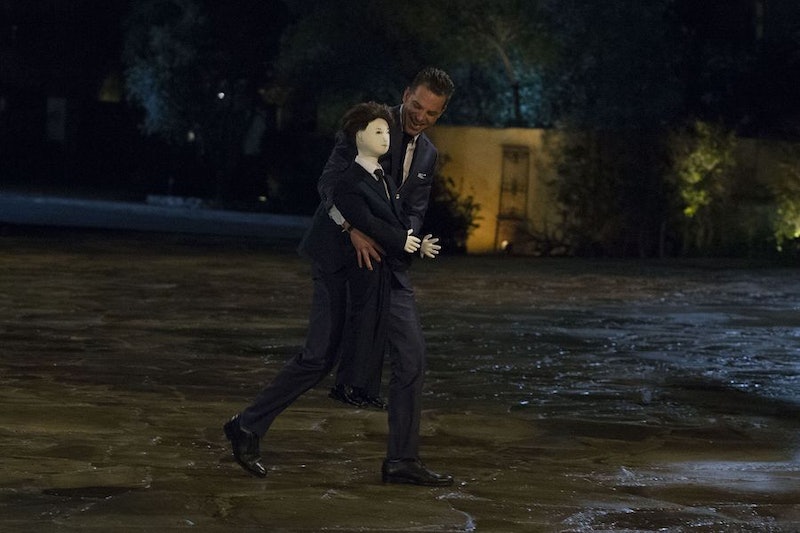 At this point on the The Bachelorette, one might think one needs a gimmick to get noticed on the show. Typically, the people who have weird jobs or costumes or something along those lines are just there on the show to get “discovered” and start a “career” in Hollywood. By career, I mean they get paid to make bar appearances for the next few years until their season is too old to care about anymore. On Rachel Lindsay’s season of The Bachelorette, the gimmicks are already here, including a guy who can’t stop screaming “whaboom” (don’t ask), a tickle monster, and a doll. Yes, I said a doll. I was doubtful at first, but the “Adam Jr.” doll on The Bachelorette is the show’s secret star. Creepy, but still a star. And, he looks just like JoJo's Bachelorette winner, Jordan Rodgers. I think that was unintentional, but when I saw the doll I was struck by the hair. I'd seen that wild mop before... a few seasons ago.

Clearly Adam took his Adam Jr. doll on the show just to get noticed, and it worked. It freaked a lot of the other men on the show out, and a few of them made comments along the lines of, “If that things starts moving or appearing in different rooms, I’m out of here.” I concur. But what was so funny about the first episode of Rachel’s Bachelorette season was that the doll would just pop up places, watching Rachel work her first pre-rose-ceremony cocktail hour. At one point he started speaking French. Of course.

Unlike the real Jordan Rodgers, who is a mostly affable guy, Adam Jr. is super creepy, especially if you grew up watching Goosebumps like I did (doesn’t he remind you of Slappy the dummy?), but if Adam wanted a way to get noticed, this was it.

But just because you get noticed doesn’t mean you’ll stick around. Like I said, those with a shtick are usually not — to get into Bachelor vernacular — “there for the right reasons.” What does having a doll really mean anyway? Does Adam take Adam Jr. everywhere with him? Is it like his best friend? Does he buckle Adam Jr. in his car so he can ride in the HOV lane when he goes to work? These are things I hope Rachel wants to know, because I have questions, too.