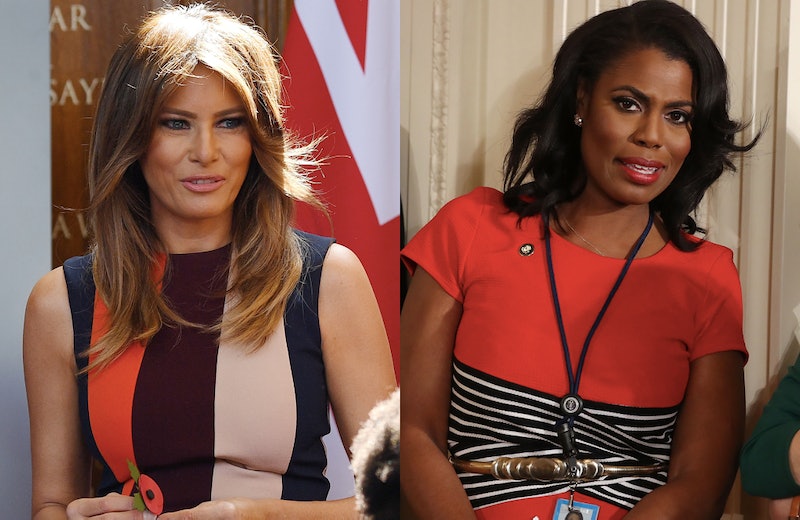 Things seem to have taken an even more chaotic turn inside the already tumultuous White House after Omarosa Manigault Newman revealed recordings of conversations with several Trump officials. According to an Axios report published on Wednesday, journalists Jonathan Swan and Mike Allen wrote that even Melania Trump told POTUS to ignore Manigault Newman and her upcoming book, a piece of advice he chose not to take.

According to Axios, the president's advisers suggested he “hold his tongue” where Manigault Newman was concerned. Trump publicly railing against her would only boost her book sales, according to his advisers. But Trump let loose on Twitter anyway, referring to his former communications director of the White House Office of Public Liaison as, among other things, a "dog."

Those advising Trump to opt for silence, the report noted, included Melania. Axios reported: “Trump said privately that First Lady Melania Trump had advised him to stay above it. But they knew he wouldn't be able to resist.” So far, neither Melania nor her communications team has commented on the report. Bustle has reached out to the first lady's office for comment.

According to Axios, Trump’s extensive background in reality TV seemed to underline his approach for handling Manigault Newman. Swan and Allen wrote that it was this kind of familiarity with reality television drama that may have pushed Trump to tweet about Manigault Newman on Aug. 14, “When you give a crazed, crying lowlife a break, and give her a job at the White House, I guess it just didn’t work out. Good work by General John Kelly for quickly firing that dog!”

The backlash to Trump’s scathing tweet on Manigault Newman was swift. Even some of his longtime defenders seemed to distance themselves from him. Among them, Axios reported, was Geraldo Rivera who tweeted on Aug. 14, “[I] fear my friend @realDonaldTrump undermines himself by using intemperate, boorish language to describe his enemies. I can't stand @OMAROSA — a bully, back stabber, and big mouth. But to call her a ‘dog' and ‘low life' is beneath dignity of the office of @POTUS, and open to ugly connotation.”

In the wake of Manigault Newman coming forth with her recordings, the White House appears to be scrambling. According to a White House official who spoke to Axios on condition of anonymity, “From the folks I've talked to (and I know I feel this way), it's honestly more of true disappointment that [Manigault Newman] did this.”

The White House official also added, “Not because she's some pillar of integrity ... but because at the end of the day, she was in the trenches with us” and that “[i]t's truly a bummer to think anyone can turn on so many people, so quickly.” The official also said that they believed Manigault Newman was “clearly enjoying it.”

It's hard to say how Trump will treat this ongoing discord with Manigault Newman going forward — including if he will listen to his wife's reported suggestion at all. But if his Aug. 14 tweet is indicative of his future strategy, it may not be too far off to say that White House officials' advice for Trump on this particular subject won't be heeded.