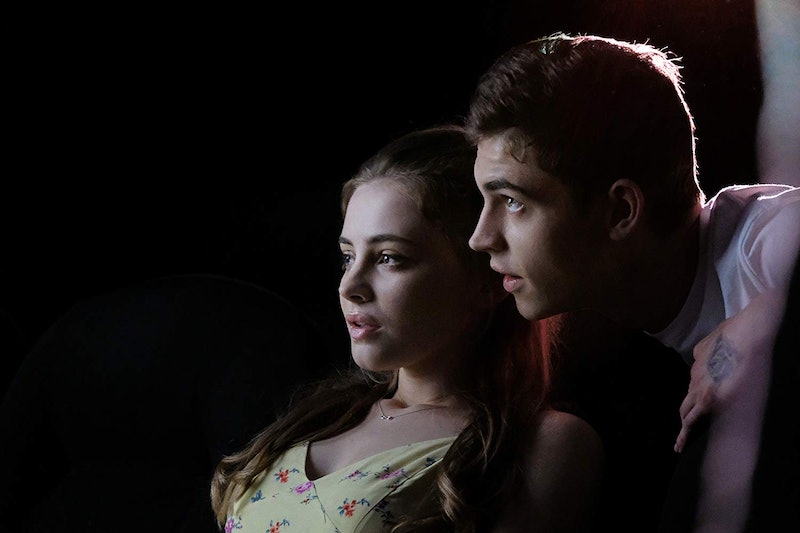 Ahead of its April 12 premiere, the movie adaptation After had already found its biggest critics in some of Harry Styles fans. The book series that the film is based on began as "punk One Direction" fanfiction on Wattpad by author Anna Todd. Because of this, the release of the film's first trailer in November of last year led to a Twitter debate about whether or not After would damage Styles's image. But stars Josephine Langford (yes, she's Katherine Langford's sister), and Hero Fiennes-Tiffin are here to set the record straight: After is not about Harry Styles.

"I mean, the fanfiction originally was inspired by [Harry Styles's] face," explains Langford, who plays Tessa Young and read the first book in the After series to prepare. "Not even his qualities, just his face. But the character Hardin has nothing in common with him."

For Fiennes-Tiffin, the appeal of the role of Hardin Scott was never about the character's fanfiction origins. "I was immediately drawn to the complexity and mystery of my character," he says. "And to have the whole duration of the film to unravel that with the audience, bit-by-bit, was what intrigued me immediately."

Yes, the original fanfiction uses the names of Harry, Liam, Zayn, Louis, and Niall. And, yes, it was inspired by the 1D fandom's obsession with "punk edits," wherein they would photoshop even more tattoos onto the band members. But before publication, Todd had changed a lot of details from her fanfiction — Harry became Hardin; other names were changed; Tessa evolved as a character; and more scenes were added.

Fiennes-Tiffin also says that he, personally, took no inspiration whatsoever from Harry Styles when he portrayed the role. "We appreciate that the inspiration stemmed from there while ago, but if you actually would watch the film I would love to hear how someone could say it was similar to Harry Styles," he says. "The way it’s been developed through the rest of the books and the script — which was not our job [as actors], we just picked up the script where it was finished — it’s a very well-rounded storyline and character. "

So what is the story about? Langford emphasizes that the focus of this romance film is not, in fact, solely on Hardin. The majority of the movie's focus — especially since After the book is told from Tessa's perspective — is in its main character's coming-of-age, specifically as it pertains to her sexuality. And this, particularly, was what drew the actor to the project in the first place.

"I think it’s really great to see a film where you have a girl exploring her sexuality, and you see that journey, and you get to see her enjoying things and her pleasure," Langford says. "In a lot of films usually you see a girl giving and a guy receiving, and you don’t see the girl receiving. I think that’s something that’s considered a little bit taboo, and so I’m proud to be part of a story that goes there and tells that."

Despite the backlash from some fans, the actors maintain that there's still a huge audience for the film. After all, back in 2014, the wildly popular 99-chapter fanfic garnered millions of reads. "Every generation needs a good love story, and this is ours," Fiennes-Tiffin says. "With the number of readers, and how enthusiastic they are about the story, there must be something appealing about it. And I think we’re just trying to meet, or exceed, the expectations of bringing it to screen."