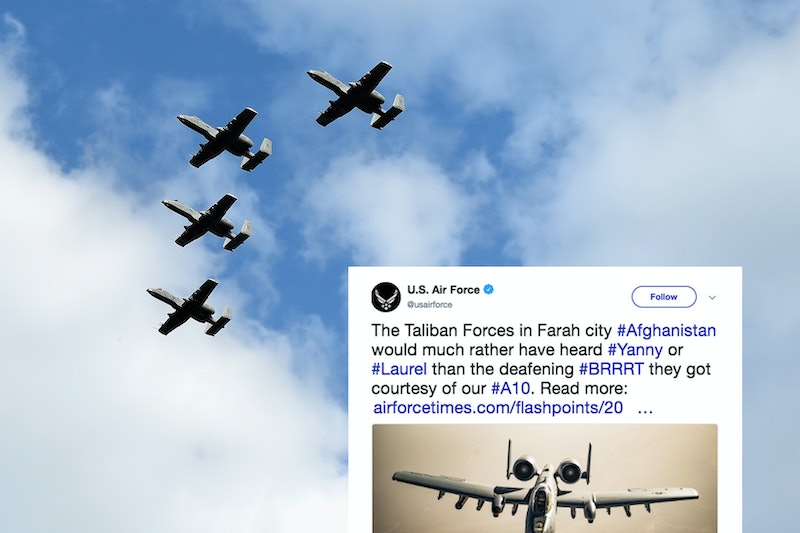 A viral internet debate reached the U.S. military on Thursday when the Air Force tweeted about Yanny vs. Laurel, the hottest thing online since #TheDress. The tweet said that Taliban forces in Afghanistan would rather hear the Yanny/Laurel clip than a U.S. attack aircraft that was deployed against them earlier this week. The Air Force deleted the tweet hours after it went live and posted an apology for making a joke in "poor taste."

"The Taliban Forces in Farah city #Afghanistan would much rather have heard #Yanny or #Laurel than the deafening #BRRRT they got courtesy of our #A10," the initial tweet read. It linked to an Air Force Times report about the deployment of A-10 Warthog aircraft fighting Taliban forces in the western Afghanistan city of Farah.

The attack aircraft was called in as part of an attempt to prevent the Taliban from taking control of Farah "during the first major assault against a provincial capital since the Taliban began their annual fighting season," according to the Air Force Times.

After deleting the post Thursday afternoon, the Air Force tweeted: "We apologize for the earlier tweet regarding the A-10. It was made in poor taste and we are addressing it internally. It has since been removed."

If you’ve been offline the past few days, the Yanny vs. Laurel debate stems from an audio clip of a robotic voice that people either hear as "Yanny" or "Laurel." The debacle brought back memories of #TheDress that looked either blue and black or white and gold depending on who was looking at it.

Although most debates about the clip Yanny/Laurel clip were lighthearted, the Air Force's joke linking it to a military attack on Taliban forces was called "tone-deaf" and "cringeworthy" by media outlets. The U.S. airstrikes referenced in the post "eliminated" 28 Taliban fighters in Farah, according to the Air Force Times.

Army Lieutenant Colonel Martin O’Donnell, a spokesman for U.S. forces in Afghanistan, told the Air Force Times that Afghan A-29 light-attack aircraft and Mi-17 helicopters "conducted the majority of strikes," with the assistance of the A-10s mentioned in the deleted tweet.

The Taliban claimed on social media that they were conducting clearing operations in Farah on Tuesday before the airstrikes began. However, U.S. officials claimed "the Afghan security forces are bringing their full capabilities, consisting of Army, Police, Commandos and Air Force, to bear on the situation," according to the Air Force Times. “As we have seen over the last couple of days, the Taliban are unable to hold terrain during such isolated attacks, and their unsuccessful raid attempts on district centers in Badakhshan, Baghlan, Faryab and Zabul," U.S. officials said in a statement to the publication.

Pentagon Chief Spokesperson Dana White was asked if she thought the Air Force's tweet was “appropriate” during a hearing Thursday, The Hill reports. White said she had not yet seen it, but would "take a look at it and come back" with a response.

“What’s important to understand is that is the Afghans' fight," she said, according to The Hill. "We are working by, with and through these partners, and they are dying to secure their own future, and I think that shouldn’t be forgotten in any of this.”

Although White said she would look into the tweet, it's unclear if the Air Force will take further action to prevent future social media posts making light of deadly military attacks. The Air Force's apology post hours later did say it would address the matter "internally," but no specifics were given as to what that process will actually entail.