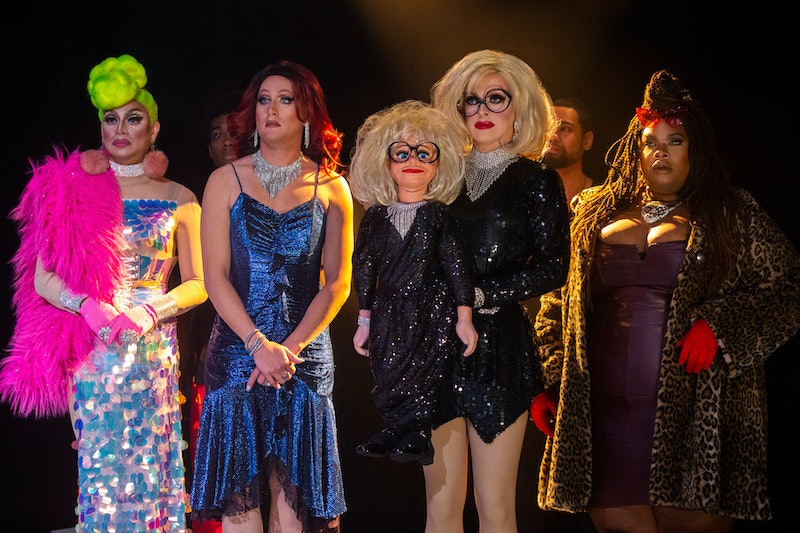 "We’re all born naked. And the rest is drag," RuPaul once explained to Oprah. RuPaul's new drama show AJ and the Queen is all about RuPaul reconnecting to the heart and soul of drag; to his own childhood roots; and to the community he works in and uplifts every day. Unsurprisingly, AJ and the Queen's guest cast is a stellar showcase of drag queens from RuPaul's own Drag Race, from Bianca del Rio and Latrice Royale to Jinx Monsoon and Jujubee.

In AJ and the Queen, RuPaul stars as Ruby Red, an older drag queen who's forced to travel from club to club across America and perform again in order to recoup her savings after her heart is broken and everything is stolen from her. She ends up traveling with AJ, her young orphaned neighbor who stows away on her RV. Together the two learn how to be a family together, all while befriending and reconnecting to drag queens far and wide.

It's as much RuPaul's story as it is a homage to drag itself. Quite a few drag queens strut across the screen in the first season alone, and if the show gets a renewal, undoubtably we'll be seeing even more familiar faces grace the stage. Here's a list of all the cameos.

Latrice Royale featured in RuPaul Drag Race Season 4, as well as All Stars Seasons 1 and 4.

"I’m from the old school, and I love a queen that really makes you feel," Latrice explained to Huffpost. "Whether it’s an emotion or you’re losing your sh*t and screaming and hollering because they are turning the party and you can’t even contain yourself."

Trinity the Tuck was in RuPaul's Drag Race season 9 and won Season 4 of All-Stars.

"I’m not always the most politically correct queen. I’m a drag queen. I come from old-school nightclub drag where I entertain adults," Trinity explained to Entertainment Weekly. "My type of entertainment is not for everybody, but I appreciate the fans who get it."

"He made me feel like we were being seen," Jinx explained to Entertainment Weekly about RuPaul. "And people knew that we were a viable career choice and not just a joke or an afterthought in the nightclubs."

Chad Michaels was on Season 4 of RuPaul's Drag Race and won All-Stars Season 1.

"Pre-RuPaul, celebrity impersonation was the pinnacle of drag," Michaels told Entertainment Weekly. "He definitely shifted things ... he opened people’s minds to going, ‘Oh, these aren’t just guys dressing up as celebrities. This is a fully realized character that is original.’"

In talking to Entertainment Weekly about RuPaul, Bianca Del Rio said that "he definitely set the standard, but, you know, I think he’s opened doors for me, and I don’t think he realized how many doors he’s opened for everyone else.”

"Drag helped me be fully aware of my authentic self," Valentina told Entertainment Weekly. "There’s a shift between how masculine and how feminine I feel that I don’t really feel the need to define if I am male or female, because I feel like both at the same ... Non-binary means you don’t have to be either or."

Eureka O'Hara was on RuPaul's Drag Race Seasons 9 and 10.

"When I started drag I did it for fun," Eureka told Paper Magazine. "But now, I do it to teach and to have a platform for body positivity, as well as a way to teach self-worth and to spread some general positivity."

Manila Luzon was on RuPaul's Drag Race Season 3, as well as All-Stars Seasons 1 and 4.

"When I first came out of the closet, I decided that I would start doing drag, pursuing it for real," Manila told Socialite Life. "I’ve always loved it and been intrigued by it and as a child, watching RuPaul and Dame Edna on TV – I’ve always been very interested in it."

More like this
These Brooke Davis Quotes From 'One Tree Hill' Will Never Get Old
By Sabienna Bowman and Jack Irvin
The Banned 'Friends' Ad Shows Monica As You’ve Never Seen Her Before
By Sam Ramsden
Ashton Kutcher Wants Danny Masterson “To Be Found Innocent” In Rape Retrial
By Jake Viswanath
'Abbott Elementary' Fans Probably Missed This 'Parent Trap' Easter Egg
By Sam Ramsden
Get Even More From Bustle — Sign Up For The Newsletter
From hair trends to relationship advice, our daily newsletter has everything you need to sound like a person who’s on TikTok, even if you aren’t.