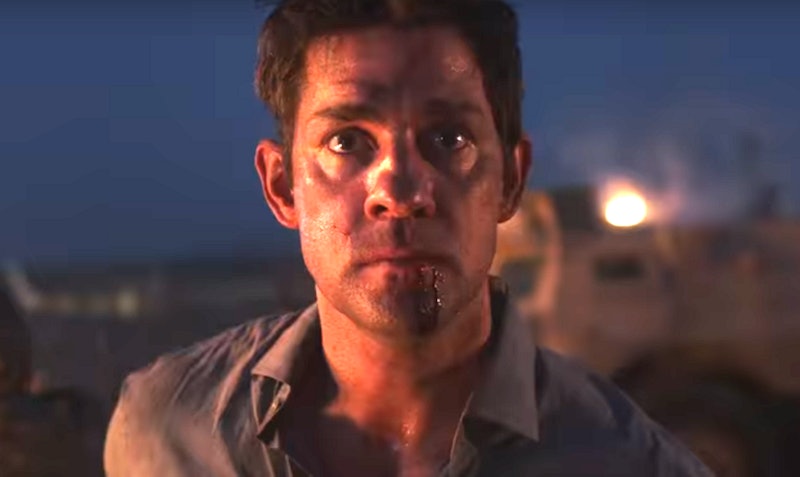 Whether you're a huge fan of writer Tom Clancy or miss John Krasinski's boyish charms on the small screen, the Jack Ryan Super Bowl commercial is a sure-fire touchdown. And part of that is thanks to the Jack Ryan trailer's "All Along The Watchtower" cover, which seems to add a sense of timeless drama to the commercial. Released in 2013, "(All Along The) Watchtower" is a reworked version of Bob Dylan's original track, in which rapper Devlin drops new lyrics over the songs iconic melody with Ed Sheeran singing the song's original chorus. The choice feels appropriate for the commercial on a superficial level, but it actually makes sense for Jack Ryan in a couple of other ways too,

For starters, it's worth noting that Jack Ryan has been portrayed in a variety of different formats and by a range of actors. On top of appearing in many of the Rainbow Six computer games, the character has also been featured in five movies and interpreted by four different actors, as a result. Alec Baldwin played him in 1990's The Hunt For Red October, Harrison Ford did in 1992's Patriot Games and again in Clear And Present Danger from 1994, Ben Affleck portrayed the character in 2002's The Sum Of All Fears, and more recently Chris Pine played him in Jack Ryan: Shadow Recruit. Now, of course, we also have Krasinski's take on the character too.

All of which is to say that though the character has a mainstay of iconic characteristics — he's smart, decisive, and daring, for instance — all of these actors have provided their own unique twist on Jack Ryan, too. As a song, "All Along The Watchtower" has similarly maintained its core characteristics while receiving a number of different interpretations over the years.

The most iconic reworking of the song, of course, is by Jimi Hendrix. That one is so incredible that even Dylan once claimed it was better than his original. In an interview with the Fort-Lauderdale Sun Sentinel, the singer-songwriter said of Hendrix's cover of "All Along The Watchtower," "he probably improved upon it by the spaces he was using. I took license with the song from his version, actually, and continue to do it to this day."

However, there have actually been dozens of covers of "All Along The Watchtower" over the years — including from artists like Dave Matthews Band, Neil Young, U2, Pearl Jam, the Grateful Dead, and Bear McCreary. Like Jack Ryan, the song is a beloved property that has been continually reworked and modernized since its creation. From that perspective, the song is apt. But when you consider that "All Along The Watchtower" actually became something of an anthem for U.S. soldiers during the Vietnam war, it feels even more pertinent to some of the potential themes of the show.

By including Presidential speeches about the pursuits of "freedom" and "liberty" and the potential costs of such ideals, the commercial appears to be making a commentary on what looks set to be a war-based narrative. Add onto this the fact that the character of Jack Ryan is a CIA-analyst, and the song makes sense in recalling an American working within an international conflict. Judging from the action in the Super Bowl trailer, Ryan may also be dealing with that conflict out in the field and not just from behind a desk at the CIA.

Tom Clancy's Jack Ryan will be premiering on Amazon Prime on Aug. 31. In the meantime, you may as well listen to the dozens of "All Along The Watchtower" covers that exist in the world as a way to pass the time.

More like this
Britney Spears Met The Weeknd & Sam Levinson, So She May Actually Be On 'The Idol'
By Jake Viswanath
Selena Gomez Joked About Her Relationship Status In Her ‘SNL’ Monologue
By Grace Wehniainen
After 'Heartstopper' Used This Indie Artist’s Song, Streams For It Soared 8,000%
By Alyssa Lapid
Taylor Swift Knew Hayley Kiyoko & Becca Tilley Were Dating 4 Years Ago
By Grace Wehniainen
Get Even More From Bustle — Sign Up For The Newsletter