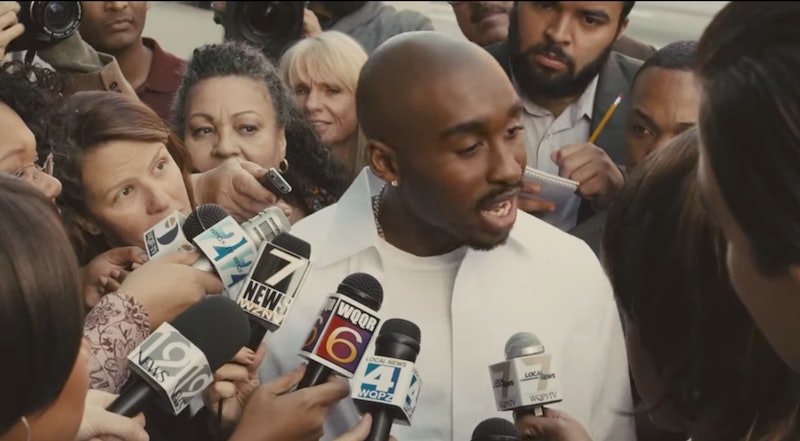 The new biopic about Tupac Shakur is set to come out on June 16, and once you leave the theater, you'll have a soundtrack to bob your head to in the days that follow. The All Eyez on Me soundtrack pays homage to the controversial yet indisputably talented rapper, and trust me — you'll want to listen to this one on repeat.

In an interview with HipHopDX, L.T. Hutton, an LA-based music producer, revealed that the new movie's soundtrack will feature new artists as well as some familiar legends, for a compilation dream come true. By the sounds of it, it seems like this album will be everything Pac could have wanted and more. Said Hutton,

Hutton also hinted at which artists we could expect on the soundtrack, but as of now, nothing is confirmed. If concept becomes reality, fans can plan to hear the sounds of E-40, 4-Tay, Kendrick Lamar, and Treach, among others. There's no question the soundtrack will be legendary.

The film is already getting a lot of press in preparation for its big release this month. All Eyez on Me is a biopic about Shakur, starring Demetrius Shipp Jr. (as Tupac), Danai Gurira, and Kat Graham, and taking fans on a journey through Pac's life before fame. The late rapper released the influential album All Eyez on Me in 1996, which featured classic tracks like "2 Of Amerikaz Most Wanted", "California Love", and the Bootsy Collins rework "Rather Be".

If you were a Death Row fanatic, you're going to appreciate what the movie's soundtrack has to offer. With a double CD promised, I'll be happy to discover how a circa '91 Snoop, lyricist Lamar, and the South Central experimentalist ScHoolboy Q leave their musical mark on the movie.