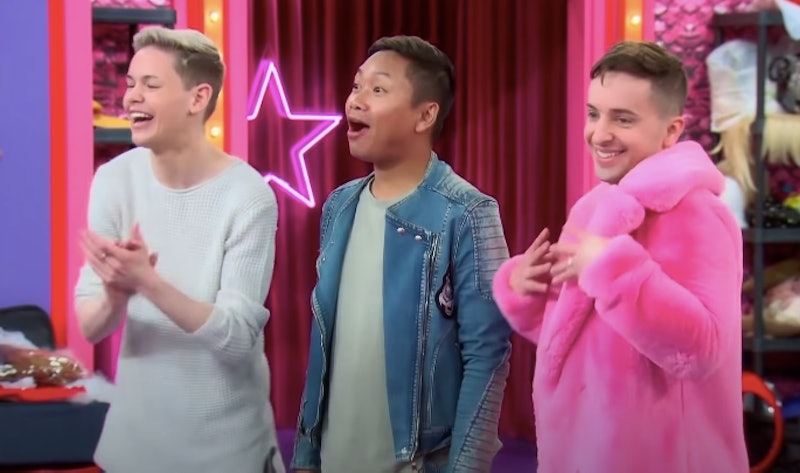 Before doling out their best celebrity impersonations during the upcoming Snatch Game, the Drag Race: All Stars queens got their own taste of the paparazzi during Friday night's TMZ-themed improv challenge, "SheMZ." In teams of two (and one of three), they each spoofed a pop culture moment that was once plastered in the tabloids, and in between takes, posed as newsroom bros regaling "Kressley Carson" with the latest tea in Hollywood. Here's the breakdown.

In a portrayal not unlike their own All Stars relationship, Shea and Alexis played frenemies heading out on a lunch date. When SheMZ showed up and asked Alexis if she was kicked off Fake Housewives for being "too trashy," she stood up to reveal that she was "pregnant," after which Shea stood and revealed the same news. They erupted into a bickering match, pulled pillows from each other's dresses, and well...SheMZ caught it all on camera.

Jujubee just wanted her daughter Blair to get into Drag U, but she got into jail instead. The queens were arrested for being part of a bribery ring allegedly headed by Miz Cracker, who denied any involvement to SheMz — even after Jujubee revealed Blair's application with a picture of her face edited onto Laganja Estranja's body. "All this proves is that I taught her the key elements of drag," Cracker said. "Charisma, uniqueness, nerve, and also photoshop."

The big news here wasn't that India stole nearly all of the inventory from Mayhem's store and denied it to SheMZ. The news was that, in the midst of her denial, she confessed to being a "licker," pulled out a donut, and went to town a la Ariana Grande. Mayhem then revealed that she, too, was a "licker" and joined in.

Each of the stories were comparably salacious, but in the end, it was Cracker's performance that landed a win. Now where is the real SheMZ and how can I subscribe?

More like this
Susie Wrote About Choosing "Sun Not Shade" After Clayton & Rachel's 'Bachelor' TikTok
By Grace Wehniainen
Erika Jayne's Estranged Husband Tom Girardi Has Been Indicted On Fraud Charges
By Jake Viswanath
Everything To Know About A Potential 'RHODubai' Season 2
By Kadin Burnett and Brad Witter
'RHOSLC’s Heather & Whitney Are Still On A “Friendship Break” After Season 3 Reunion
By Jake Viswanath
Get Even More From Bustle — Sign Up For The Newsletter
From hair trends to relationship advice, our daily newsletter has everything you need to sound like a person who’s on TikTok, even if you aren’t.