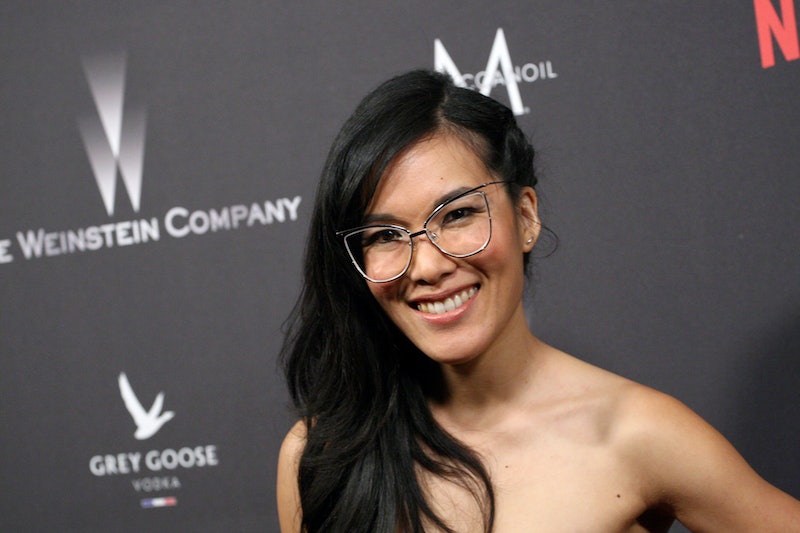 It's never fun to get rejected by someone who you've harbored feelings for over a long period of time, but sometimes it's really fun to watch someone else get rejected — well, when it's Ali Wong, it's fun. Then again, watching Ali Wong do just about anything is wildly fun, as anyone who's watched her comedy specials knows. On April 23, the actor posted a trailer for a new Netflix rom-com called Always Be My Maybe starring herself and Fresh off the Boat's Randall Park. The trailer teases the two as old friends who go way back, and while Park's character, Marcus, wants to make a move on being more than friends, Wong's, Sasha, has her own agenda.

Right when Marcus opens his mouth to confess his true feelings, Sasha tells him that she met someone — and that's not all. "We had the most insane, freaky ass sex," she says in the clip. The trailer itself punctuates the casting credits with clips of Wong excitedly gushing about the titillating rendezvous she'd had with another man. "I have after shakes," Sasha tells Marcus.

It looks like the Netflix movie, out May 31, will showcase the two characters' unfortunate timing that falls into the common traps laid out in classic rom-coms about longtime friends-turned-lovers like When Harry Met Sally and Just Friends. This time, though, Billy Crystal's Harry isn't the one bragging about the amazing sex he's had, it's the raunchy-comedic genius Ali Wong.

While not much else is known about the Netflix rom-com's plot, last spring Variety reported that the film will also star Keanu Reeves and Daniel Dae Kim, and both actors appear on the movie's IMDb page, though without character names. Perhaps Reeves is the one responsible for the big hickey that Sasha shows Marcus in the trailer, which she brandishes as a badge of honor. The other cast members, per Variety, include Karan Soni, Charlyne Yi, Michelle Buteau, Vivian Bang, James Saito, Lyrics Born, and Susan Park.

On the film's Netflix page, the site sets up the film with the description, "Everyone assumed Sasha and Marcus would wind up together except for Sasha and Marcus. Reconnecting after 15 years, the two start to wonder ... maybe?" Considering that Reeves and Dae Kim star in the film as well, it seems like Marcus will have stiff competition. So far, it definitely sounds like Wong's character will get a lot of action based on everything that's known, and the comedian, who co-wrote the film, likely wouldn't have it any other way.

The trailer for the new rom-com was released almost a week before Wong's new Netflix animated series, Tuca & Bertie, premieres on May 3. It might be time to crown the "fertile minded" comedian as the official Queen of Netflix. The world is that much better for it, too, considering all of the laughs that Wong's multiple projects will undoubtedly inspire. Tuca & Bertie stars Tiffany Haddish alongside Wong as a pair of quirky bird besties (that will hopefully fill the void created by Broad City's departure from TV).

Between Always Be My Maybe, Tuca & Bertie, and Wong's current national comedy tour, "The Milk and Money Tour," it seems like the hilarious performer is staging a takeover. It's not a hostile one, though, it's just really, really funny.