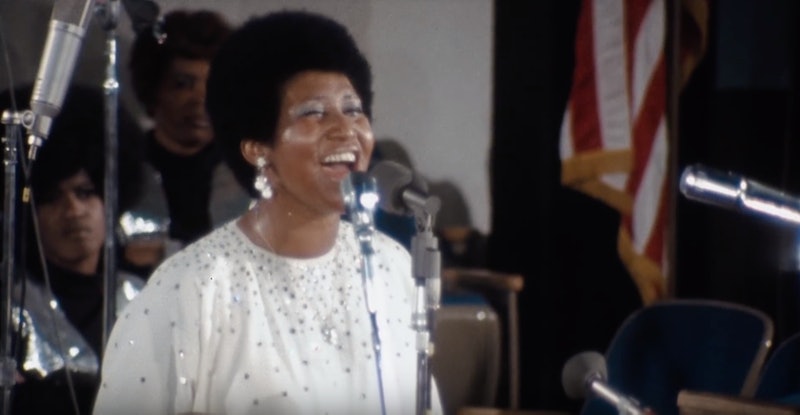 On January 13, 1972, Aretha Franklin walked into the New Temple Missionary Baptist Church in Los Angeles and sang one of the world’s most well-known church hymns, “Amazing Grace." The rest is history. Now, over four decades later, fans will finally be able to see footage of what has become one of the greatest gospel performances of all time. The trailer for Aretha Franklin’s documentary Amazing Grace is here, and quite frankly, you may want to grab some tissues before you start watching it, just in case.

In the trailer, a 29-year-old Franklin takes the stage behind the church’s pulpit and starts to sing with calm assurance as her spectators, including her father Reverend C.L. Franklin and mentor Clara Watts, watch in awe and intrigue. As her power grows and her iconic vocals soar even higher, the audience gradually gets more emotional and leap to their feet, much like we do when hearing her voice in our living rooms. It’s utterly spell-binding, even when condensed into a two-minute clip. Rolling Stones frontman Mick Jagger also makes a very brief, but adorable, cameo in the trailer.

The upcoming film centers around the Queen of Soul’s iconic performances at the Church, which was filmed by late director Sydney Pollack over two consecutive nights and had gone unreleased until last year, when it was finally screened at the DOC NYC festival. But it was not an easy road to get this film to any screen. The footage was deemed lost until Alan Elliott learned about its existence as an Atlantic Records employee in 1990 and started to have conversations with Pollack about finishing the film.

Elliott told Vulture the story of how the documentary finally came to fruition in December of 2018, saying that Pollack gave him his approval to finish the film and transferred ownership of the footage prior to his death in 2008. He worked to compile the various clips together, but was blocked from screening the film multiple times by Franklin herself. According to Elliott, the singer initially agreed to participate in the film's release, but alleged financial disagreements prevented it from happening. "Aretha came back right before we were going to sign the papers and said, 'Julia Roberts gets $10 million a movie, so I should get $5 million,'" the producer claimed. "We didn’t have $5 million, so she just didn’t want to do it in the end."

Franklin sued Elliott and the production company multiple times when they attempted to screen the documentary at film festivals before seeing it for herself in 2015. "In August 2015, she gave an interview to the Detroit Free Press saying that she loves the film, but she thinks there are some legal issues," Elliott told Vulture. (In fact, Franklin did tell the Detroit Free Press at the time that she "loved the film itself.") A deal to release the film was finally reached with Sabrina Owens, the executor of Franklin's will, after the singer's death in 2018.

Though the documentary will be a first for fans, those familiar with Franklin's discography will recognize the performances. At the time, the show was also recorded and turned into the 1972 album Amazing Grace, which remains the best-selling live gospel album of all time and the biggest-selling release of her career today, according to Popsugar. Being able to see these recordings on film will surely be a transcendent experience for many fans. In other words, get ready to attend the best church service of your life when Amazing Grace hits theaters on April 5.